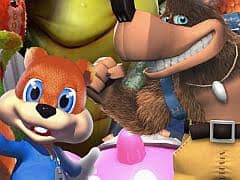 30 games plucked from the Rare’s history, packaged together for £20 is either the best deal ever (if you’re a Rare fan) or simply great value. This hand-picked list starts with Jetpac from 1983 and concludes with 2008’s Banjo-Kazooie: Nuts and Bolts. With a bevy of extras and neat additions, Rare Replay is easy to recommend. But some strange choices and other issues also mean it’s hard not to wish the whole thing was a bit better – oh, and there’s no GoldenEye, because of various unconvincing reasons that weren’t “necessarily licensing”.

As a collection there’s more here than just games. For a start, a series of menus styled to resemble a theatre experience house each of the titles, along with bonus video material in the form of making ofs, unseen games, concept art and music. You can tell this wasn’t just a cash grab, but it’s a real shame that all this bonus content must be unlocked by earning stamps. All the releases prior to Xbox 360 feature unique milestones that must be achieved to earn a stamp, while the included 360 titles translate Gamerscore into stamps – a shame, but understandable given that these are run using the new backwards compatibility added to Xbox One.

All the games released prior to N64 are given an optional CRT filter (I didn’t like it, but the choice is yours) and the ability to rewind – a very nice touch considering how unforgiving some of these older releases are. The fact that they all load almost instantly has allowed Rare to produce a series of Snapshot challenges, tasking players to collect things within a certain time or achieve similar mini-goals. These can be handled alone or as part of a series, and each has a leaderboard to add a competitive angle.

The quality of Rare’s early output was, at the time, top class. These days anything made in the 80s is something of an acquired taste, so if you’re not already into retro gaming from this era you may well find these to be interesting curios, if not big time sinks. But that’s fine, as there’s loads of other stuff to dig your teeth into. Killer Instinct onwards the back catalogue starts to resemble video games as we know them today, even if it’s still a little jarring to go back to Blast Corps, one of Rare’s early N64 efforts.

Blast Corps, Conker’s Bad Fur Day and Jet Force Gemini all appear to be emulated to run in HD, but all suffer from small to major issues. Blast Corps and JFG haven’t aged well, with the former feeling quite slight as an experience and the latter forcing controls on the player that seem completely alien. JFG is a third-person shooter designed to be played on a controller with only a single analogue stick, and it shows – you can’t set this up to play like a modern dual analogue shooter so the learning curve is quite steep. On my first play I immediately made my character go prone and proceeded to crawl for a few minutes until I figured out what to do. Conker holds up the best, by far (despite an inverted x-axis camera that can’t be changed), but for some reason it suffers from some disappointing frame rate issues, and sadly the Xbox remake is nowhere to be seen.

Rare’s only Xbox title in the collection is Grabbed by the Ghoulies, a bizarre haunted house combat game in which you attack using only the right analogue stick. At the time it received very mixed reviews, but it holds up pretty well and is good fun, and somewhat surprisingly has been given the best port out of the entire bunch. Although some video footage used before the game starts and some text are extremely low res, the game itself is presented superbly in HD, widescreen and at a nippy frame rate. In short, it looks great, and begs the question: why didn’t Conker Live and Reloaded get this treatment? As one of the Xbox’s most visually impressive titles, it would have looked brilliant in HD.

As I said, the included Xbox 360 games have had nothing done to them. They run just like the Xbox 360 games added to the Xbox One’s backwards compatible list (and that includes frame rates that aren’t quite as high as on the original console – something I hope MS will continue to improve). It’s a great list, though, barring Perfect Dark Zero – which felt dated on release and somehow is even more bizarre now. Kameo, which came out alongside Perfect Dark Zero at the launch of the 360, feels a generation newer, while Viva Pinata and it’s follow-up (not sure both were needed, though) and Nuts and Bolts are superb. The N64 Banjos and Perfect Dark are both the 360 versions, and as such are as good as they were then, and a step above the other N64 releases included in the package.

Rare Replay is a lovely collection that I can’t help but feel could have been even lovelier. It seems a bit petty to be moaning when what’s here is such incredible value, but we have some titles at their very peak and others simply emulated. The 360 games not being tied in with the same milestones and launching via backwards compatibility seem slightly disconnected from the rest, too, even if a handful of them show Rare at its best. But had every game been given the same treatment as Grabbed by the Ghoulies, we’d be having to pay a lot more than £20. For what it is, Rare Replay is absolutely worth adding to your Xbox One collection, even if it leaves you wanting just a little more.

Rare Replay is a lovely collection that I can't help but feel could have been even lovelier.
8 Some proper classics Incredible value and lovely presentation Some frame rate issues Aside from Ghoulies, all basic ports