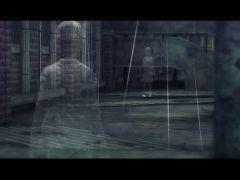 As horrible as it makes me sound to say it, Rain is a beautiful video game. The surreal adventure of a boy who can only be seen in the rain – chasing a girl also suffering from a similar plight – was always going to be horrendously pretentious. It’s all the better for it.

Rain’s appeal comes in the fact it’s so simple. A puzzle game at its heart, you’re asked to navigate your way around a mysterious town, avoiding ‘the darkness’ (monsters) who will end your existence should you be seen. It’s a case of using shelter to hide the boy’s figure – he’s invisible when away from the weather – and distracting enemies with sound (jumping in puddles) or other items you find along the way. Calling it a stealth experience wouldn’t be too much of a stretch – it just happens to be one that has no problem playing Debussy’s Clair De Lune as it does so.

That’s Rain’s greatest strength, too. It’s so focused on telling an emotional story between its two leads that it smothers itself with a classical score, and a camera that wants nothing more than to capture, for lack of a better term, moments. If you only want to shoot people’s heads off when you have a controller in hand it’ll be lost on you entirely, but for anyone who enjoys the more diverse side of gaming it’s excellent from start to finish.

It struggles to conclude, and some of the writing misses the mark, often falling into cringeworthy territory, but these are minor points in a game that shines through its originality. With similarities to the likes of ICO, Shadow of The Colossus and last year’s Journey, it’s another exceptional entry in Sony’s arthouse-inspired run of games that it consistently does so well.

It may not have the hype of this winter’s blockbusters, but it’ll stay with you a lot longer than many of those games will.

A beautiful video game.
9 The music. On occasions, there's a genuine sense of dread. Is just lovely to play through. Struggles to conclude in a meaningful way.