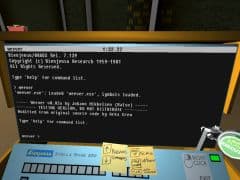 Hands up if you’ve ever ‘hacked’ anything in real life. I haven’t. I bet you haven’t either, you poser. If you have, answer this question: is it fun? Or is it one of those really banal things that somehow makes for compelling video games, like driving trucks across europe or planting vegetables? Either way, even if real life hacking is really boring, the important thing is that it isn’t here. Instead, we’ve got one of the best puzzle games of the year.

Quadrilateral Cowboy casts you in the shoes of the titular cube-headed hacker, whose mission is almost always to plan and perform a heist (although sometimes you’ll play badminton, of course). Your main weapon is a ‘deck’, a laptop housed in a briefcase. Carting it around, you’ll use said deck to manually punch in telnet command strings to open doors and other obstacles you encounter, or turn off laser grids and security cameras, as you proceed towards either your target or your extraction point.

The deck is your primary interface with both the world and the various other items you’ll use to sneak around, over, or through the tricks and traps that await. A small drone is controlled via running the .exe which controls it and punching in commands: so too for a remotely-fired sniper rifle. Whether it’s opening security doors or telling a gun to fire, most of the time you’ll be inputting text strings into a computer. While it’s not exactly like the real thing, it carries just enough realism (or, more accurately, what most players would class as authenticity) to the source to feel utterly engrossing, especially when it introduces multi-part instructions, wait commands, and other gubbins. At the end of each successful heist you get access to new toys, which can be combined with your other gear in an effort to get in and out of future heists as quickly as possible.

The joy of QuadCow (as I am calling it, for the sake of brevity/sanity) is found not just in the satisfying Hollywood hacking, all chunky BBC Micro keyboard sound effects, quick keystrokes, and half-panicked string recall, but in the idea that the puzzles, while having an optimal solution, allow just enough room for slightly different interpretations. It’s a game about making theory work in practice, and like with real coding sometimes workarounds and other ‘messy’ solutions work as well as others. Amazingly, Blendo made a first-person puzzler about actually showing your working out into something fun.

The most satisfying stages of QuadCow are the ones that (if you want a good score) require players to combine all their tools with a little bit of imagination. So for every painstakingly typed command that sees a rifle fire two quick shots to open a door requiring two simultaneous inputs, there’s also the levels where you wonder if you can actually throw a chair through a window in order to skip a step. You’ll try, naturally, and a lot of times it will actually work.

This creativity – and a good chunk of the game’s appeal – comes from the fact that the worlds themselves pay little attention to pure realism. Sure, there are buildings and doors and windows, but then there are space stations and robotic torsos and time-rewinds and multiple-timeline puzzle solving. QuadCow’s 80s tech stylings and dream-like world feel give it its aesthetic hook, but it’s also pleasingly tactile while remaining utterly absurd. It recalls Valve classics like Portal in this regard.

QuadCow only stumbles as it gets nearer to the finish line, where it becomes clear that it’s ending just as it’s really getting into its stride: you can go back and attempt to improve your time (and score), but I never felt like having to barrel through quickly was my ultimate aim. Instead, I was just enjoying figuring out how to beat the puzzle at hand, and it would have been nice to have a few more of those. But it’s a minor quibble. QuadCow is still worth your time: smart, engaging, and memorable.

A smart, engaging puzzler with a great central mechanic.
8 Interesting puzzles Hacking is fun Feels like it ends just as it starts really getting going 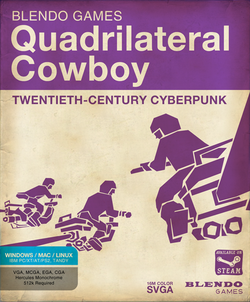