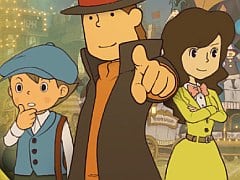 The biggest puzzle, of course, is how many Professor Layton games I’ll be prepared to put up with before getting bored. Professor Layton and the Miracle Mask, free from localisation limbo after originally being a 3DS launch title in Japan, arrives in the UK with 150 more Laytonesque teasers on the cartridge, with an additional 365 being offered up as part of a daily download system. But, really, I found myself more intrigued by Layton’s new playground, Monte d’Or.

Monte d’Or is basically what Las Vegas would be if it was built in nineteenth century Europe, a modern town filled with the razzle-dazzle of hotels, revelry and casinos. It doesn’t really strike me as Hershel Layton’s cup of tea, though we’re still in a universe delightfully twee enough that he usually has a brew in his hand.

There’s a lot of life tucked into this new city, and the game once again weaves its many logic puzzles around a slowly unravelling plot that’s quite a bit darker than you’d initially expect. Layton and the gang are on the hunt for The Masked Gentleman, a character as nebulous as you’d expect from someone who wears a white suit and a golden mask, and whose initially nasty pranks become decidedly more sinister as the game develops.

So far, so Layton. But this is the first outing of the top hat and pointy finger on Nintendo’s 3DS, and the first time the series has rendered itself in 3D, but outside of the excellent and expressive cel-shaded character models much of the presentation is the same. The new engine allows for the occasional action sequence, however, and these add a little flavour to the game but won’t be remembered as its best moments. The most notable success of the 3D graphics is that they allow the characters to exhibit more life when they postulate between puzzles, giving life to the cast beyond a fade animation transitioning between two still images.

Some of the puzzles make use of the new three-dimensional engine (though never the need for stereoscopy) but for the most part the brainteasers will prove a little too familiar to regulars of the series. It’s good news that very few of them feel unfair and designed around trickery, mind.

There’s obviously a satisfaction from cracking each of the challenges, but there’s a sense here that Layton’s most inventive and inspired puzzles are long behind him. A mid-game section gives Miracle Mask a much needed boost, the sequence intriguingly perplexing enough that it will power you through to the conclusion.

But what does all this mean for Layton? The puzzles in Miracle Mask, in many instances, are a far weaker attraction than the glittering carnival of Monte d’Or, and more than ever I found myself playing a Layton game for the story rather than to feel stupid and get cross whenever I didn’t see the proper pointing finger animation.

Layton is a good distance removed from the hysteria that surrounded his debut title, then, but the fifth game in this stylised series is enough to keep you entertained.

Layton is a good distance removed from the hysteria that surrounded his debut title, then, but the fifth game in this stylised series is enough to keep you entertained.
7 3D visuals are nice Monte d'Or is a great location Puzzles aren't inventive enough Feels very familiar

Professor Layton and the Miracle Mask

A new adventure with the professor.

Professor Layton and the Miracle Mask

A new adventure with the professor.