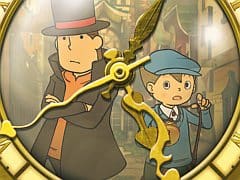 Here’s a puzzle: why would a thirty-something fellow in a top hat spend all his time dragging a young boy about the streets of London? Sure, Luke might say that he’s Layton’s ‘apprentice’, but I’m pretty sure psychologists would argue it’s a classic case of Stockholm syndrome. Whatever the relationship between the pair, the pre-pubescent whippersnapper plays a far more instrumental role in Professor Layton’s third outing. After receiving a letter from somebody claiming to be the Luke Triton of 10 years in the future, the mystery-solving duo are thrown into an adventure that tears apart the very fabric of space-time. Ignoring the fact that Luke doesn’t have any friends of his own age, it’s the biggest mystery in the series yet.

The first point to stress here is that this is a Layton title; a puzzle compendium under the guise of an adventure game. If you’ve played either of the previous games you’ll know exactly what to expect: quaint visuals, a slightly bonkers narrative and a plethora of puzzles. It’s all reassuringly familiar, but some subtle additions make this the most intuitive take on the formula to date. The memo pad – a transparent overlay that allows you to draw on the screen – now supports eight colours and two different brush sizes. This means you can jot down your workings of more difficult problems in a far more coherent fashion. You can even erase specific parts of your scrawl now, too, whereas before you’d have to erase the whole thing in order to correct a mistake.

Variety is the spice of life, we’re assured, and Lost Future is a much more flavoursome dish as a result. The conundrums cover arithmetic, literacy, observation, shape, logic and good old-fashioned general knowledge. As a single entry in the series, Lost Future exceeds its predecessors in offering a diverse menu of teasers. Each mind-boggler is weaved into the story far more seamlessly, too, and makes sense in the context of the scene. One predicament, for example, sees Layton and Luke hiding behind the slot machines at a casino as their enemies blanket the place in bullets. The puzzle that follows involves creating a contraption out of slot machine parts; a gun that uses coins as ammo. With the problem solved, one of the game’s glorious cut-scenes plays out in which Layton fights back with his homemade weapon.

While certainly diverse in form, the riddles aren’t always as well constructed as previous efforts. Intelligence and logic is often thrown out the window at the hands of poorly-worded instructions. A simple arithmetic question is twisted into something convoluted and misleading, and you’ll be forced to read the text several times before you know what it’s even asking of you. Equally as frustrating are the answer explanations – or the lack thereof. After not understanding the question and blindly guessing the correct answer, it’s nice to be told how you should have arrived there; all too often, the game completely omits an explanation, and you’re left feeling confused and dissatisfied.

A new ‘super hint’ allows players to expend an extra hint coin (which can be collected from nooks and crannies around London) in exchange for a clue that damn near gives away the answer. Of course this is completely optional, and for younger players (or those feeling particularly brainless) it’s a welcome addition to the game.

The presentation side of things is as strong as ever, with gorgeous environments, a colourful cast of characters and the same incredible soundtrack that plays such a huge part in defining the game’s distinct atmosphere. The London overworld is the biggest yet, with a train station acting as the link between several districts of the city. Even with quick-travel options in place, traversal can become a little tedious, with progression becoming a simple case of tapping through hundreds of screens to reach a destination. Still, with three new mini-games available from the menu, there’s always an opportunity to take a quick break.

The mini-games in Lost Future are arguably the most enjoyable of the series. The most notable of the trio involves plotting the path of a car by dragging and dropping arrows onto a grid. You have a set number of these arrow tiles available, and must plan ahead so that you can collect all of the required items and arrive at the destination. If this doesn’t float your boat, you could help a parrot reach his delivery destinations, or place stickers in a book to tell the correct story. These actually provide some of the most entertaining head scratchers in the game, and given the fact that you can choose them at any point from the menu, you’ll rarely get bored.

What’s most interesting about Lost Future is the characterisation of Layton himself. While in previous games the conundrum crackerjack is simply there to advance the plot and solve riddles, this time around he’s put in situations where he’s forced to show real emotion. I won’t spoil the story in any way, but Layton deals with several personal issues over the course of the game, which finally offers a glimpse at the man beneath the brain. More importantly, we also learn where Layton got his trademark top hat from. If that doesn’t get people playing the game, I don’t know what will.

From a certain angle, this is the best Professor Layton game yet. Lost Future presents the most intriguing mystery to date, and brings a humanity to Layton’s character that hasn’t been seen before. It’s also far more slick and accessible than its predecessors, with all the improvements you’d expect from the third game in such a popular series. The puzzles themselves – the very heart of the game – are starting to show their age, however. While varied within Lost Future itself, they’ve all been seen before, only in different forms from previous games. This, in combination with some poor explanations, is mildly frustrating and something Level-5 really needs to work on in the next instalment. Still, the presentation is as charming as ever, and bar a few niggles, the experience as a whole is extremely enjoyable.

The presentation is as charming as ever, and bar a few niggles, Lost Future as a whole is extremely enjoyable.
8 Superb minigames. The best mystery yet. Getting around can be a hassle. Convoluted puzzle explanations.

Professor Layton and the Lost Future

Professor Layton and the Lost Future