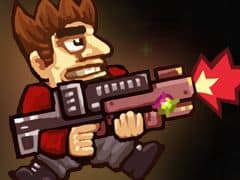 Well that’s a shame. For a moment, Platformines looked like the next indie gem. A 2D platformer-shmup with a quintuple jump and randomised loot? That’s a lot of my buttons you’re pushing there, friend.

You’re launched into the action quickly, dodging bats and shooting dudes while the game hands out trinkets. It’s nothing exceptional, but it feels great at first, really nailing the kill-loot-sell loop.

At first, it appears to have the sugary, immediate thrill of a shmup somehow combined with the refined exploration of an RPG, evoking that ‘what do I get next?’ feeling.

Well, nothing. You get nothing next.

You get your four gun types pretty quickly, and then Platformines is the same forever.

Your health increases and your guns do more damage. The stronger enemies –

It’s not compelling. The character and enemy growth only exist to cancel each other out, so the grinding just feels monotonous. There are no abilities or talents to unlock, no grappling hook, jetpack or dash attack, no elemental gun damage and no ricochet bullets.

Platformines isn’t rescued by its RPG elements either. There are no boss monsters or interesting objectives to break up the bat-dodging and man-killing, only a series of cannons to collect on the map.

I stopped getting involved in the bulk of the fighting after only a few short hours, instead choosing to simply run to each cannon. Then I did the five-minute puzzle bit at the end and got a ‘well done’ screen for my efforts. For all its promise, then, sadly Platformines is a deflating balloon of a game.

A mix of 2D exploration and classic shoot and loot staples.

A mix of 2D exploration and classic shoot and loot staples.