It was only 18 months ago that Onimusha 3 was supposed to mark the final vanquishing of the Genma demons by the Onimusha samurai clan (and Jean Reno, naturally), but like a demon warrior, a good franchise doesn’t tend to stay dead for long. Dawn of Dreams, however, is far from a rehash, boasting a new story and characters, as well as some refreshing changes to the gameplay that should appeal to fans and attract new ones.

The Onimusha series has shaken the “Resident Evil with samurai” label that it was originally laden with and developed into a wholly different style. It has minimised the number of puzzles and shuffling enemies in favour of fast sword-based action against numerous foes and large bosses, and in this respect Dawn of Dreams is more of the same. The gimmick of basing the main character on a famous actor has been dropped, and the story continuity has been all but cut off, in an effort to give new players a chance to become acquainted without having a long and daunting story to catch up on.

That might be the plan, but the story here is still capable of causing confusion thanks to little explanation of what exactly is going on, at least initially. Much of the story has to be extrapolated from what is seen early on, and in little notes and diaries found throughout the levels. Even later on, when the exposition does start to become clearer, it can be slightly overwhelming for those who aren’t familiar with the conventions of the series. It’s slightly frustrating too, because the story is actually very good once it becomes clear.

Set twenty years after the end of Onimusha 3, the story tells us that Japan has been united in relative peace after the terror of the demon invasions. Things naturally take a turn for the worse as natural disasters tear the land apart and the Genma start to reappear, until rumours of a ‘Blue Demon’ with the power to fight them begin to spread. The story follows Soki (also known as the Blue Demon) as he uses his considerable ‘Oni’ powers against the forces of evil in a convoluted tale of love, revenge, and good against evil. While Soki can be considered the main protagonist, four other playable characters will join the ranks as the game progresses, each with their own abilities and weapons.

Something that should be noted with regard to the story is that the quality of voice acting in the game is generally poor and occasionally irksome. Inexplicably, the option to switch between the English and original Japanese voices found in the US version has been dropped from the PAL release, so a high quality dub would have gone a long way towards improving the enjoyment of the story. The English voices are generally disappointing and it’s also worth nothing that the lips of characters are obviously synched with the Japanese voices, which can make their exclusion even more galling.

More positively, the gameplay retains the high standards of its predecessors. Much of the gameplay is spent in combat and the system is fluid and intuitive, allowing new players to grasp the basics before it rapidly expands with new moves and the addition of the other playable characters. The game does a good job of pacing this expansion in order to prevent the sheer number of attacks becoming daunting and even the most complex of attacks become second nature before too long. Most of the conventional enemies are mere sword fodder with basic AI, and provide little challenge once their idiosyncrasies are worked out, but boss fights are fairly regular and provide far more of a challenge. Death is pretty inevitable at least once in these fights, and so the game has checkpoints placed liberally so that you’re unlikely to ever have to play through more than one room or fight to get back to where you were. Many games would do well to learn from this example.

The changes to the established Onimusha gameplay are undoubtedly what are of most interest to fans, and overall it retains the feel of an Onimusha game while also bringing more to the table. The fundamentals are essentially the same, but the multiple-character dynamic has been made considerably more important to the extent that it’s rare for you to be fighting alone. Basic commands can be issued to your CPU confederates, but nothing more than telling them to hang back and heal (very useful) or fight alongside you, and it’s also possible to take control of the alternate characters with a single button press. Characters can use their unique abilities to get into previously inaccessible areas on completed levels – Jubei is small enough to crawl through holes and walk across weakened beams, for example – so that completists can go back to find new items in earlier stages.

When it comes to presentation it’s actually hard to fault the game. While there’s no progressive scan or widescreen support, this remains one of the better looking games on the PlayStation 2, with a consistent frame rate, great effects, and a high level of overall detail, especially in later stages. One of the first enemies in the game is a towering boss that has to be fought at the same time as numerous grunts, and the game handles it without a hitch. Despite the aforementioned problems with the questionable dub, the numerous CG scenes are up to the usual Onimusha standard and the music is suitably epic, including support for Dolby Pro Logic II surround sound.

Overall, Onimusha: Dawn of Dreams is an excellent addition to the series that should please fans and provide an ideal point for newcomers to see what the fuss is about. Series heritage aside, this is a pleasingly lengthy adventure spread across two DVDs that’s most definitely worth a look.

Series heritage aside, this is a pleasingly lengthy adventure spread across two DVDs that's most definitely worth a look.
8 Excellent presentation Enjoyable and varied combat system Story could do with more explanation English dub could be better 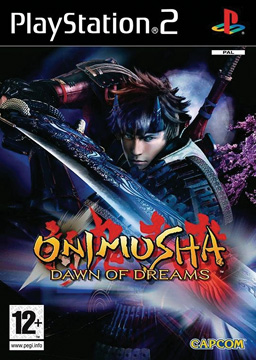