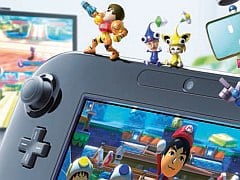 Wii Sports sold the Wii in seconds. It was the perfect game to convince newcomers that the Wii was something they wanted to own, and remained the primary Wii game of many for years. Nintendo Land won’t have the same effect on people, but it does feature a handful of excellent mini-games sure to be rolled out whenever enough people get together, but how often you actually do this will determine if Nintendo Land is worth its price tag.

Pac-Man is a great game that has survived the test of time. It’s no surprise, then, that Nintendo has based all of Nintendo Land’s competitive mini-games on the yellow man’s antics. Mario Chase, Luigi’s Ghost Mansion, and Animal Crossing: Sweet Day feature one player trying to evade or take down a group of other players in arenas of varying sizes. And all three games are excellent, providing fun examples of asynchronous tablet and TV gameplay.

Mario Chase sees the GamePad player taking control of Mario, with other players using Wii Remotes to chase him down. Mario has the advantage of being able to see an overview of the level, while his pursuers each have a limited view of the stage from behind their character. Working together to catch Mario, or being devious to evade capture, makes this brilliant fun.

Luigi’s Ghost Mansion makes the GamePad player a ghost, while other players each have a torch to try and find them. The ghost can see everyone on the GamePad screen, while the other players can only sense the ghost via vibrations on the Wii Remote and illuminate it with flash lights. While the ghost seemingly has a big upper hand, games are always tense and balanced, and at times genuinely nervy as players are picked off one by one.

Sweet Day is almost a reverse Mario Chase, with the GamePad player now having to catch the other Wii Remote players. The difference is that the Wii Remote players must work together to grab sweets from trees, and the GamePad player uses each thumbstick to independently control a character. Trying to control two hunters with two hands takes a fair bit of concentration, and just like Mario Chase can result in great cat-and-mouse gameplay.

These three mini-games produce the kind of loud, entertaining multiplayer gameplay that party classics like Mario Kart, Bomberman and classic GoldenEye have excelled at achieving down the years. There’s a natural lean towards working together against the GamePad player, and victory usually feels like a splendid team effort rather than a solo win.

Sadly, the so-called team mini-games on offer fail to excite in the same way, with Pikmin being a little too frenzied, Metroid suffering from awkward controls (whether you’re on foot using a Wii Remote and Nunchuk or in the air in an air ship using the GamePad), and Zelda: Battle Quest coming across as a dull and repetitive simplification of Link’s bow and sword combat.

Solo gamers have a lot of content to choose from, but the games on offer are a very mixed bag. Yoshi’s Fruit Cart, Donkey Kong’s Crash Course, and Balloon Trip Breeze each make good use of the GamePad’s touch screen and gyro controls, but the other three come across as either entirely pointless (Octopus Dance), repetitive in the extreme (Takamaru’s Ninja Castle), or forcing the use of the GamePad screen for no good reason (Captain Falcon’s Twister Race).

The Legend of Zelda: Battle Quest, Pikmin Adventure, and Metroid Blast can also be played alone, but only Pikmin feels worth putting any time into, and even this loses its charm a few stages in. We all want to see games in the Zelda and F-Zero franchise arrive on the Wii, but their mini-game spin-offs here are entirely forgettable.

To get the most out of Nintendo Land you’re going to need friends and the right hardware. Each additional player will need at least a Wii Remote, and thankfully the best games (the trio of chase attractions) don’t need a Nunchuk or MotionPlus. If you want to play all the games with the maximum five players you’ll need four MotionPlus controllers and Nunchuks. That’s a considerable investment if you don’t already own these controllers and your friends can’t provide their own.

As the Wii U’s showcase title, designed to demonstrate the new console’s touchscreen controller working in tandem with a TV, Nintendo Land does a decent, albeit uneven, job. If you’re likely to get together with at least two friends and have the required extra hardware, there’s enough here to warrant a purchase – just know that you’re essentially buying the game for three incredibly fun party games. If you’re going to be playing solo, there are better options available for the Wii U.

This review is based on retail code provided by Nintendo. The game was played for 9 hours across its full range of multiplayer and single-player mini-games.

As the Wii U's showcase title, designed to demonstrate the new console's touchscreen controller working in tandem with a TV, Nintendo Land does a decent, albeit uneven, job.
6 The three chase games are excellent Three of the solo games are decent Not enough good content for the price tag Ideally needs to be played with numerous friends

Featuring a series of Nintendo-themed attractions

Featuring a series of Nintendo-themed attractions