The first thing we might do, when considering Nier Replicant ver.1.22474487139…, is to try and pin down what it is that we’re playing. At first, you might think it a new game—a sequel, maybe, to Nier: Automata, which came out in 2017 ready-wreathed in a cloud of cult appreciation and went on to sell five-and-a-half million copies. But, really, it is a remaster, polishing and retooling an eleven-year-old game called, simply, Nier. Only, hang on, there is more. It is, in fact, a remaster of one of two versions of that game: specifically, the version that never made its way out of Japan, until now. As for the string of numbers at the end of the title, it is all in the proving of a point: Just when you think you’ve reached a conclusion, you find yet more story to tell.

Fans of the game’s director, Yoko Taro, would have it no other way. For them, the end credits are merely a cue for more action, as Taro flits restively to a new perspective and recasts the tale in a fresh light. Nier: Automata featured twenty-six possible endings, and I once had someone tell me that I needed to complete it at least four times, to get its “true” ending. Do we count this as indecision, a refusal to commit to a single message or moral? Or do we regard Taro as a defender of our money’s worth, championing the unfashionable cause of replay value? Perhaps when an adventure billows to an epic circumference, trying to end it is like going in circles; you can detect that pain in Peter Jackson, who, attempting to end The Lord of the Rings: The Return of the King, settled on twenty-six possible endings and left it to us to decide which felt true. Whatever the case, I can think of no other developer so suited to a remaster, where the surge of time, as much as technology, alters the way we see a game. 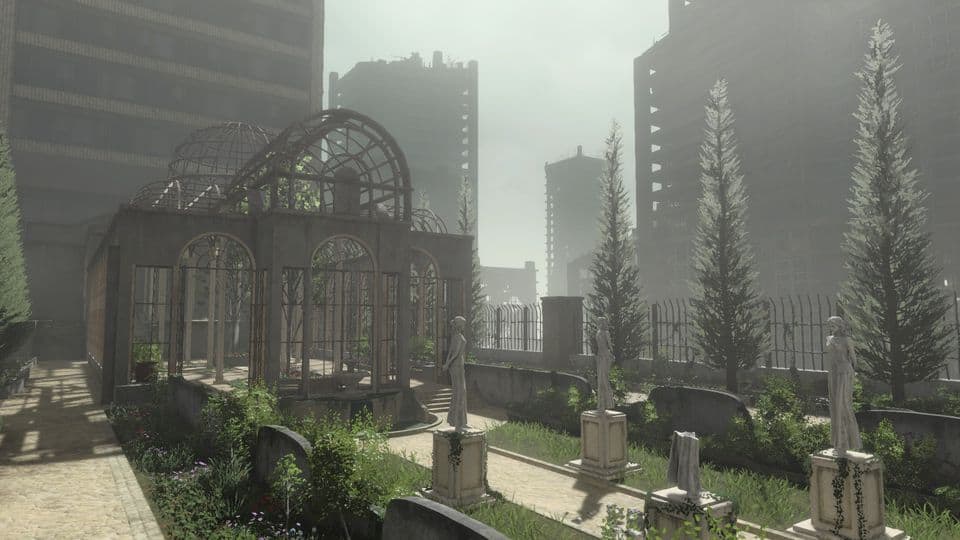 “People say the world is dying. Populations continue to fall, while plague and disease run rampant.” So we are told at the outset of Nier Replicant, which begins in an abandoned supermarket in 2049. Two children, brother and sister, take refuge amid the aisles. The girl, Yonah, is ill, racked by a nasty cough; and the boy, clutching a length of drain pipe, is her protector. Outside, the air is sharp with snow, and shadowy creatures encroach on the pair. I was quite taken with this image of the world’s final, frosted gasp; after a brief battle, however, we flash forwards in time. A caption reads, “1,312 Years Later…,” where—to our surprise—we find the siblings alive.

What is going on here? Could it be reincarnation? An alternate dimension? Or a dreamt-up vision of a revived world? If so, it isn’t that revived. The landscape is of a pale grey-green, as if the sun had cooled to an unhealthy pallor, and the people, modestly scattered, live in the bones of an older civilisation—not the one glimpsed at the start but another, leaving behind train tracks and rusted industrial machinery. “These books speak of ancient technology far beyond anything we could ever imagine,” someone says, standing in a library as grand as a church. It is here that our hero (who is namable but not customisable) receives most of his story quests. These are mainly of the fetch-and-deliver variety, the sort that chisels away at the plating of grandeur and makes you feel like what this world really needs is someone willing to roll up their sleeves and commit themselves to the cause of light admin. 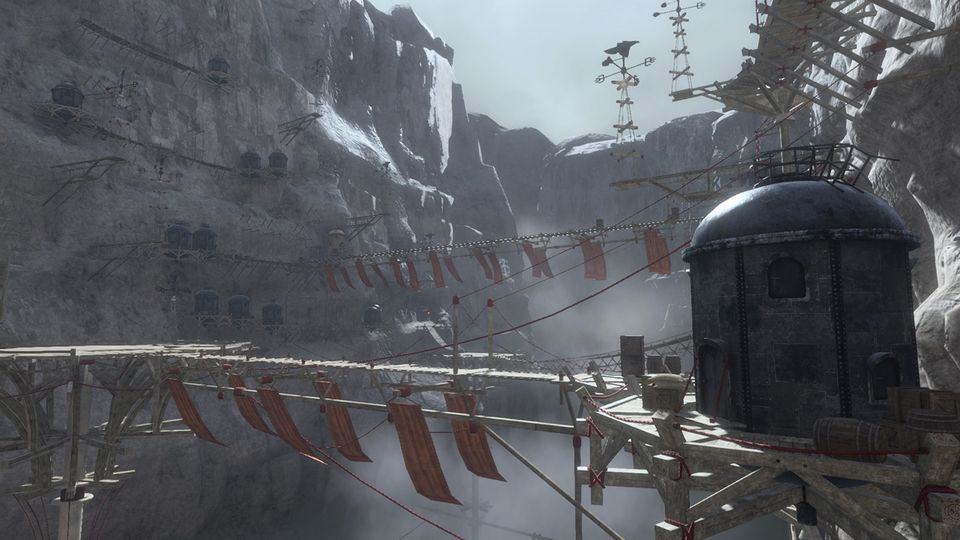 Yonah’s ailment, which has also survived the leap through the aeons, is referred to as the Black Scrawl; true enough, its symptoms include an inky rash that snakes over the skin like a restless tattoo. The search for a cure brings you far and wide, sword in hand, ready to hack down ranks of those same brutes that lurked outside the supermarket. They are called Shades, and they resemble hardened lumps of darkness, moulded ham-fistedly into humanoid form. The combat here has been redesigned—a process supervised by Takashi Taura, of Platinum Games, the team behind Nier: Automata—and it retains the airiness and chop of that game, losing its tightness and precision.

You are accompanied into each clash by a party of allies. There is Grimoire Weiss, a floating book with a haughty opinion of itself. He is voiced by Liam O’Brien, with a wafting English accent that has the unfortunate side-effect of sounding like Matt Berry, and thus binds his lines with unintentional humour. We also have Kainé, voiced by Laura Bailey, who swears like an adolescent attempting to push up the game’s PEGI rating, and who for some reason wears lingerie into battle. Later on, we also have Emil, a blind boy who wields magic that encases your enemies in crumbling stone. The main trouble with the combat is that it is no trouble at all. Weiss fires blood-red bolts of energy from his pages; Kainé, toting a pair of serrated blades, scissors her foes on auto-pilot; and each fight—whether ranged against a scattering of regular-size Shades or a ballooning boss monster—wraps up with little sense of satisfaction. 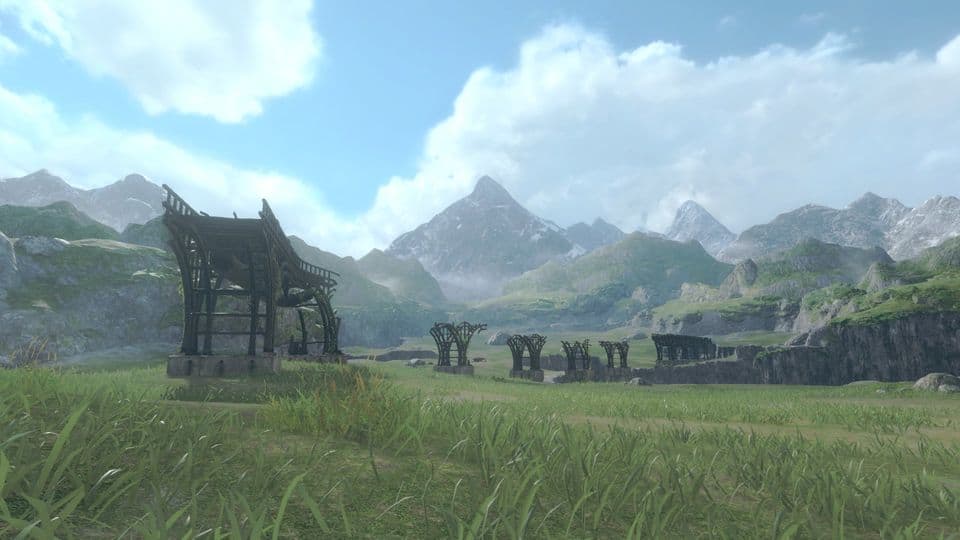 The same is true of the story, which at one point asks us to treat seriously a scene in which two books argue with each other while hanging in a paper-white void—talk about lacking dramatic spine. Why, then, should you bother with this new version of Nier Replicant? Well, Taro’s approach is of a restless rarity; he swaps genres as though trying to scratch an itch, refracting a stream of styles through the prism of his memory. One sequence, set in a mansion, is scored with knocks and creaks and bled of all colour; it has you tracking down keys etched with odd symbols, as Taro tips his hat to Resident Evil. Elsewhere, the camera cuts from a regular 3-D perspective to a top-down angle, converting some passages into bursts of shoot ’em up; and a side-on angle is used when you enter certain buildings. This latter flourish brings to mind Zelda II: The Adventure of Link, whose Hyrule was wrought from the same ash-coloured brick. And take a look at the library, with shafts of light flooding in through its clerestories. It’s a dead ringer for the Temple of Time—especially the one in Breath of the Wild, dusted with decay. Is it any wonder that, later on, the narrative jumps ahead, jolting our hero into adulthood? Taro is clearly fixed on the power of lost time. More than a decade on from the original release of Nier Replicant, he’s asking us to take a second look.