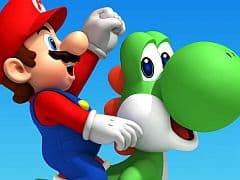 ‘Tacked-on’ sounds bad, doesn’t it? Of course it does. It makes you think of big words like ‘afterthought’ and ‘OMGzorzepicfail!’ The four-player multiplayer in New Super Mario Bros. Wii certainly isn’t tacked-on. But it isn’t the incredible, all-conquering experience some might have hoped for. It’s fun. It’s a barrel of laughs. But it’s all a bit, well, chaotic.

It seems doubtful that chaos was Miyamoto’s plan all along. His games, from Super Mario Bros. to Donkey Kong to The Legend of Zelda, have always been precise, pixelated perfection. New Super Mario Bros. Wii evolves the series, to be sure, but a sacrifice has been made.

Adding multiple players to the mix makes an already difficult game harder. Accidentally pushing Mario, Luigi or one of the Toads off of a platform, or knocking them into a pit, occurs as regularly as Princess Peach is kidnapped. The more players you add, the harder it gets to complete even the early levels. Some of the later stages require hive mind-like levels of communication. The camera pans back to provide a wider view when players are far apart, but that doesn’t prevent the feeling that you’re a Jack-in-the Box in a box with three other Jack-in-the-Boxes. On your own, you’ve got room to breathe – you can jump and double jump and triple jump without a care in the world. Add another player to the mix, and there’s a constant risk that your perfect jumps will be knocked off course – sending you straight into an enemy, or some other lethal hazard.

Accidental loss of life can often be hilarious, but never as hilarious as deliberate loss of life. You can pick up other players by pressing and holding the 1 button and shaking the Wii Remote, and then throw them by releasing your grip. You can even eat them and spit them out when riding Yoshi. You’d think, then, that the game would encourage co-operation. It does not. New Super Mario Bros. Wii is not a co-operative multiplayer game. You can try to play it that way, but eventually your good intentions will evaporate in a puff of mischief. Picking up unsuspecting Toads and throwing them into pits of fire, over and over again… human beings aren’t built to resist such temptations. Instead, it would be better to describe it as a competitive multiplayer game. It’s like Super Smash. Bros. without the special moves. Mario, Luigi and the Toads do have co-op moves, including a joint jump and a synchro ground pound, but you’re never forced to use them to complete stages – that’s just not how the game works. You play together, but rarely do you work together. Perhaps that’s why the competitive Coin Battle mode is by a country mile the best multiplayer experience the game has to offer.

It’s fun, but there’s a nagging feeling as you play the game that the levels don’t sit comfortably with having four players run amok inside of them. And a number of features indicate the game is well aware of its bloated innards. If a player dies and has lives left, he floats back on screen in a bubble which can be popped by another player. In this way, you’ll never fail the stage as long as one player is still alive. It’s useful as the game’s surprising difficulty ensures frequent death. Anyone who tells you New Super Mario Bros. Wii is fun for all the family is lying – it’s hard in an old school 2D platformer way. But you’re also able to float in a bubble at any time by pressing the A button. The idea, clearly, is to allow skilled players to pass more difficult sections without another player getting in the way.

Played on your lonesome, New Super Mario Bros. Wii feels like the sequel to 2006’s DS hit New Super Mario Bros it truly is, a 2D platformer in the classic Mario style. It’s a game that demands perfect platforming. It’s a game that tests your old school hand-eye coordination skills to the limit. It’s a game packed with 1ups, power-ups, Star Coins, secrets and pipes. But its level design stops short of reaching the heights of its forefathers: Super Mario Bros. 3, Super Mario World and New Super Mario Bros. Perhaps this is a criticism fuelled by silly nostalgia, but the many secrets and alternate paths don’t demand discovery with as much fervour as they used to. It’s still a game with nice ideas, though. Controlling a spotlight as you tiptoe through pitch black castles is one memorable experience; sabotaging friends’ success by tilting platforms with the Wii Remote is another.

Graphically, it lifts the 2.5D (3D polygons rendered on 2D backgrounds) art style of the DS game and plants it safe and sound onto the Wii’s more than capable hardware. It’s a gorgeous game, sparkling with the famous Nintendo seal of quality. It’s bright, smooth, breezy, charming, detailed and eye-catching. Koopa Troopers dance to the uplifting, and only occasionally annoying, background music. Flowers sway in tune with wind pumped from Nintendo-made speakers.

Structurally, too, it’s a similar game. Princess Peach has been kidnapped (shock… horror) by Bowser Jr and Bowser’s minions, and whisked away on an airship. It’s up to Mario, Luigi and Blue and Yellow Toad to save her. To do that, you need to work your way through eight worlds, each with interconnected levels that, once completed, lead to a boss fight with one of Bowser’s brat spawn.

If it all sounds too familiar, then pat yourself on the back – because it is. A lot of the levels rekindle hazy memories of playing 1991’s SNES classic Super Mario World, but you can’t criticise the game for this. That would be like criticising Street Fighter 4 for rekindling hazy memories of playing Street Fighter II on the SNES (or the Mega Drive, you traitor). Mario’s floaty jumping and angelic collision detection are poetry in motion. They were back on the NES. They were back on the SNES. They were on the DS. And they are on Wii. If it ‘aint broke…

Still, there’s enough that’s new and cool that the game feels fresh. Four-player multiplayer is the headline new addition, but other modes and features are arguably more successful. The new Super Guide feature is genius: If you fail a course eight times, you can have Luigi complete it for you. You can then press the + button during Super Guide to resume play and take control of Luigi, so if there’s one bit in particular that you’re having trouble with, you can have the AI play through the stage then carry on yourself once it’s passed the sticking point. The game can be extremely hard at times, so Luigi’s help is often welcome.

Star Coins are now used to purchase hints and tips movies back at Peach’s Castle. This is another genius addition. The skill movies, surely performed by Japanese robots, beggar belief. One in particular, which shows three Yoshi-riding players spitting and eating Mario across a stage without dropping him once, is a stunning display of video gaming prowess.

The Mega Mushroom power-up has been dumped in favour of a Propeller Mushroom power-up, which allows Mario to fly straight up with a shake of the Wii Remote. The Ice Flower allows him to freeze enemies by throwing ice balls at them, and the Penguin Suit, which allows him to move freely on ice or through water, gives him a nifty ground slide. All are worthy, fun additions. Returning abilities are also welcome: the wall jump, the triple-jump and the ground pound provide variety to Mario’s acrobatic repertoire. But some new abilities suffer from forced motion controls. The Spin Jump, which delays falling ever so slightly, can only be triggered by shaking the Wii Remote. As the Spin Jump is an essential move for speed runs and advanced play, it would have been better as a button press. So would picking up and throwing items, for that matter. You need to press and hold the 1 button and shake to pick anything up. It works, and the motion sensing technology is sensitive enough to always detect your input, but it’s not as instantaneous as it could have been.

New Super Mario Bros. Wii is a wonderful 2D platformer, and an essential purchase for all Wii owners, but the addition of multiplayer doesn’t live up to its billing. And why is there no online? If Nintendo can make it happen with Mario Kart Wii, why not here? No, four-player Mario brothers isn’t as good as sliced bread. Critics might say the single-player experience is essentially a 20-year-old game, but when that 20-year-old game is so eternally pleasurable, that’s no bad thing. New Super Mario. Wii is hard, old school and great fun. Who says Nintendo doesn’t make games like it used to?