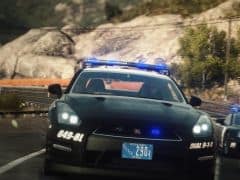 I want to love Need for Speed Rivals. The driving feels fantastic: fast, responsive, intense. Whether cop or racer the crazy action continuously had me out of my seat. But for every instance of exciting mayhem, I can name more of utter frustration.

Let’s start with the good stuff. The game looks great. Rivals’ day/night cycle has amazing detail thanks to the Frostbite 3 engine’s lighting effects. The dynamic weather is incredible: rain pounds down naturally, leaves blow up as you drive past, and small pockets of dust clouds blow by as you head into the more rural landscapes.

Sliding cars around the highways is a thrill, and Rivals does a good job of making both cop and racer experiences engaging. Except, that is, for the cop’s lack of risk. As a racer, the longer you stay on the road, the higher your ‘Heat’ level, making police more likely to hunt you down. You keep driving because you get a bigger multiplier, earning more Speed Points to upgrade cars, Pursuit Tech and buy new vehicles. However, if caught, you lose all accumulated points.

This is Rivals at its best: in the heat of the chase, cops on my tail, car damage critical. Heart-pounding doesn’t begin to describe it. Cops don’t have an equivalent gamble, lessening the impact of letting racers get away.

AllDrive is the new ‘always online’ feature for Rivals. Sadly, it doesn’t really work. The maximum number of players in one session is six, hardly enough to occupy the vast open world. I rarely ran into others, and when I did, I was already in an event.

There’s also a lack of dedicated servers, which severely affects your experience. If the host leaves while you’re mid-event, you’re dragged into a load screen, and brought back in at a point where you’ll need to restart, even if on the cusp of victory. I ended up playing single-player exclusively, hardly the point of AllDrive.

Rivals has the potential to be excellent, but too many issues get in its way, diminishing the obvious quality of the driving itself.

Reviewer’s note: I advise anybody picking the game up on Xbox One to turn Kinect off in settings before playing it. You can’t switch off Kinect commands in-game, and if you like to chat with friends while playing, you’re in trouble. Many times Rivals mistook my conversation for commands to change view, look behind and look around, leading me to scream obscenities and lose thousands of SP.