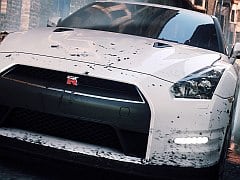 Like the cold metal girders and sun-glinted glass panels that make up Fairhaven’s skyscrapers, Need for Speed: Most Wanted is as mercilessly rock solid as it is stylish. There’s none of that “turning car lovers into gamers” stuff here. In fact, despite the class that Most Wanted’s stunning garage exudes, Criterion has made a clear distinction between the materialistic superfluousness of games like Forza Motorsport, where the focus is very much on your love for cars and the desire to curate a digital garage, and the thrill of the race itself. The result is one of the smartest, most enjoyable racing games of 2012 – one that slams emphasis directly on the race itself. Even better, it doesn’t require you to give a toss about Top Gear in order to love it.

Fairhaven, the diverse metropolis that acts as your racing playground, is a construction of weaves and webs starting from its bustling industrial core and spiralling outwards into wide-open mountain tunnels and stretches of highway. More than just a network of roads for you to plaster with burning hot rubber, Fairhaven holds Most Wanted together with a tight embrace. This is absolutely essential for a game of this type: Criterion’s desire for thrilling freedom would be nothing if its host was a bore. Exploring every area of this dense, spectacular world warms you with a satisfying way to spend time, from the discovery of luxurious cars dotted across every corner of the map to the constant stream of information about nearby races and your online rivals.

As well as the return of Criterion’s social platform Autolog, Most Wanted’s jazzed up GPS – dubbed Easydrive – knits the game together with its player. Like Burnout Paradise, Easydrive is mapped to your D-pad to allow quick, easy navigation of standard menus. Discovered events can be accessed immediately, whereas the game will plot a course if you’re yet to take part in it – the right balance between immediacy and discovery, if you ask me. You can also switch and jump straight to cars, swap upgrades and head into multiplayer. The unobtrusive menus of Easydrive helps keep the action prescient, unless you decide to fumble with settings midway around a particularly merciless corner.

But Most Wanted is not always that simple, and its core structure may confuse thanks to Criterion’s scrapping of standard car classes and the genre’s usual event-based career progression. Without a typical garage, the emphasis is entirely on you to discover new vehicles. Every car in the game – apart from the ten you’ll net from tackling the boss-like Most Wanted challenges – is available from the start, but only after you’ve found the vehicle in the world. From classic open-top Ford Shelbys to sleek Aston Martins, the roster is just large enough that you’re getting a decent chunk of desirable automotive excellence. This isn’t Forza or Gran Turismo by any means, but there’s enough to keep even the most studious petrolhead happy.

Most importantly, racing the 40-odd cars is where Most Wanted cements itself into the genre’s upper echelons, with Criterion’s innate style mixes with an engaging substance: the camera bumps and slams around as you crash back to earth after a jump, slinging a Ford GT into a drift drums up a cacophony of sound, and the game’s breakneck pace makes navigating through the bustling traffic a challenge harder than diamond nails. And, yes, you will crash. A lot. And it will often make you cross. But the satisfaction when you emerge from a packed tunnel unscathed, often zooming away from a pile-up worthy of Michael Bay’s most erotic desires, is without comparison.

As well as their volatility, each car feels suitably weighty, but with its own individual nuances – a vintage Lamborghini controls nothing like a tuned Nissan. The flow of racing is more streamlined, too. Takedowns no longer interrupt the action, and instead just give you a satisfying on-screen message that doesn’t rip you out of a pursuit. Criterion’s directorial control of the action and presentation is often stylish, but random hiccups like being spawned the wrong way round after a collision do break the illusion of seamless racing.

Once you source a ride, each vehicle has five unique events associated with it. Instead of falling lustfully in love with a new BMW that you’ll upgrade and tamper with for the duration of a lengthy career, Most Wanted wants you switching out between vehicles quickly to keep things varied. This is somewhat frustrating if you have an affinity with a certain automobile, but chopping and changing is vital considering the limited number of event types. None of them are dull, but there’s a surprisingly rigid restriction to standardised modes like circuit races, speed runs and one-on-one chases.

As you win each car-specific race, you’ll unlock a new upgrade for that car. Different boosts, different chassis types, different tyres; each car quickly becomes a more alterable beast. This makes them far more deadly in races, and the more adventurous and daring amongst us will even use Easydrive to switch from a chassis that allows for higher top speeds on the straights, to heavier framework that’ll allow for greater shunts in the more aggressive wheel-to-wheel competition. Failing an event multiple times (it will happen, sorry) spurs you to think about how you can switch loadouts to better your results.

Everything from winning races, smashing EA-branded billboards (later replaced with the profile pictures of your Autolog buddies) and bursting through secret gates rewards you with Speed Points. Amass enough points and you’ll unlock one of the 10 Most Wanted challenges. These challenges – a prolonged one-on-one race while up against some of the fiercest police opposition – are amongst Most Wanted’s toughest events, but it’s surprising how quickly you can progress to the top once you start raking in points.

Criterion has made no attempt to disguise the fact they’re making a game designed to be played socially, so it’s no surprise that Most Wanted only gets better once you party up. The game continually keeps you in the loop about what your friends are up to, but inhabiting Fairhaven with a party is a more soulful way to play than just waiting for a pop-up notification that someone bettered your race time or zipped past a speed camera faster than you. Set-lists comprise of races and challenges for you and a group to undertake, whether it’s drifting, jumping the farthest or navigating to a particular spot in the city. Standard races are par for the course, but it’s the more exploratory stuff that makes Most Wanted shine. This is a game where darting around the city breaking billboards is enough to keep you entertained for hours, simply because there’s so much enjoyment fused into the driving itself.

Need for Speed: Most Wanted’s greatest achievement is how it sets such a firm focus on racing. Criterion set out to make an open-world arcade racer where competition is king, and succeeded in pretty much every respect.

Need for Speed: Most Wanted's greatest achievement is how it sets such a firm focus on racing. Criterion set out to make an open-world arcade racer where competition is king, and succeeded.
9 Racing is exhilarating Fairhaven is an open world racing heaven Easydrive and Autolog work in perfect harmony A lack of race and upgrade types