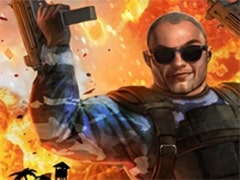 Narco Terror is the best fun you can have with drugs for £8. I’ve never tried drugs – not knowingly, at least – but I can imagine that must be the case. There’s no way you’ll ever be able to buy as much cocaine as is featured here for that amount of money anyway, and you certainly wouldn’t be as excited to blow it all up in a gulf of fire and destruction.

When it comes to Narco Terror, then, drugs and destruction are literally the name of the game, which ought to give you enough of an idea about how stupid it is. It’s a ludicrously over-the-top twin-stick shooter with all the hallmarks of an 80s action flick and more clichés than this review. There are drug cartels, mountains of explosive barrels, rainforests, slow-mo action shots, exploding helicopters, and corny one-liners. The only thing missing is Arnie, and I’m not convinced he doesn’t pop up somewhere.

Mechanically speaking it’s fairly reserved, borrowing heavily from arcade classic Mercs and recent genre-favourite Renegade Ops while giving players just enough toys to keep them entertained. There’s a crude upgrade system that lets players improve their guns after blowing up enough stuff, but it’s the weapon pick-ups and gameplay twerks that prove the most entertaining: frazzling gang members with the laser rifle is the most satisfying, and being let loose with a gunship’s cannons a close runner-up.

There are some minor technical hiccups – the odd audio bug, ropey netcode and visual inconsistencies suggest this isn’t a game that’s had too much thought put into quality control – and its relentless idiocy can threaten to turn tedious.

But a game so brazenly ridiculous as this deserves some equally outrageous statements to be made about it in return. So here we go: Narco Terror is a surprisingly enjoyable old-school arcade romp; it offers some of the greatest fun I’ve had on XBLA this year; and is one of the silliest games you’ll ever play. But once the high wears off, you’ll be left craving for a dose of something a little more substantial.

A goofy blast from the past that lacks substance, but makes up for it in style.
6 Stupid, mindless fun; classic arcade gameplay 'So bad it's good' dialogue and cutscenes Too short Lacks polish and diversity