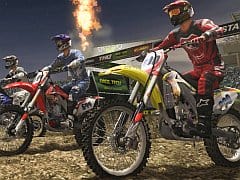 I’ve reviewed five games that feature the words “MX”, “ATV” or a mixture of both in their title, yet for the life of me I’d struggle to explain how any one is different to another. All of them feature muddy tracks, usually set amongst vast open spaces of woodland or indoor custom arenas. The handling is usually always a bit fiddly, it’s incredibly easy to fly over your handlebars and into a wall of tyres and there’s an annoying whining noise coming from the engine between your legs. MX vs ATV Reflex is an attempt by THQ to give the genre a makeover, complete with a slick career mode, reflex rider controls and brand-new terrain deformation. Has all this made Reflex stand out from the crowd?

As in previous games in the series, you’re not strictly limited to MX bikes and ATVs here, with UTVs, buggies, and sport trucks also on offer. If you want to see most of the changes made to this year’s game, though, you’ll want to stick to the vehicles in the game’s title, with the large, enclosed rides not giving you the new, improved Reflex experience.

Terrain deformation is handled well in Reflex, with your vehicles cutting grooves into the muddy track surfaces. These aren’t purely cosmetic, either, with the churned up ground having an effect on your vehicle’s handling, throwing you off course. This is great in the bikes and ATVs, but get behind the wheel of a sport truck and the slightly rough terrain will have almost no impact, making the whole thing feel disappointingly similar to the previous game in the series.

The same is true of the new Reflex handling system. While the left analogue stick is naturally mapped to your vehicle’s steering, the right stick often needs to be used in combination, shifting your rider’s body weight independently to the steering. On a bike or ATV this works brilliantly, giving you the ability to corner more tightly and remain on your ride after a slightly uneven landing. It’s in the bigger vehicles, again, where it doesn’t work as well – simply because you’re no longer playing as an exposed guy on top of a piece of motorised metal.

Part of what makes off-road racing so much fun is the uneven terrain and the seat-of-your-pants bouncing around, but Reflex’s physics system throws in a few unexpected spills that occasionally ruin the fun. You might be skilfully riding over a bumpy piece of track, handling your bike with the precision of a pro, and all of a sudden your ride will flip into the air and spin uncontrollably. You haven’t just ploughed into a rock, but just another piece of track that looked identical to what you had previously been able to skim across quite gracefully. Without any sense to these crashes, races in Reflex can be quite frustrating at times.

In terms of career mode structure, it’s pretty basic stuff, even if the game has made an attempt to bring it bang up to date with a rider profile card. There’s even a voice over man that gives proceedings a Forza 3 feel, but Reflex has none of that game’s effortless cool. There are numerous event types to take part in, including straight up races, trick competitions and open-world checkpoint runs, but none of the courses are especially thrilling to drive and the career ends up feeling like the standard slog to get enough cash to buy new vehicles.

Another problem lies with the trick system, more specifically how tricks are rated. The performing of tricks is handled well, with the moves now mapped to a combination of right analogue stick movements rather than face buttons, but inconsistent rating makes the whole system frustrating. On one run you’ll perform a series of average tricks and score highly, then follow that will some amazing stunts that get a fraction of the credit they deserve. It’s a system that seems almost random and makes for some confused head scratching.

There’s a plethora of online and single-system multiplayer to get sunk into, with 12-player online events and four-player split-screen, but a week or so after release games aren’t easy to find. When you finally find some players, the competition is good fun and runs relatively lag-free, and the various multiplayer-only mini-games (such as the Snake-like event) offer something a bit different.

It’s all a bit been there, done it before, though, and the game’s solid but unspectacular presentation doesn’t help. There’s a decent draw distance on offer, but the environments lack the level of detail we’ve come to expect from modern racers. The frame rate also struggles on PS3 – something that the Xbox 360 version has next to no trouble with.

Despite some effort to make Reflex more than just another MX vs ATV game, it’s ended up feeling very similar to what’s gone before it. The terrain deformation is neat and the Reflex system adds a new level of skill to the handling, but these aren’t features that completely shake up the experience. If you’ve been a fan of what THQ has delivered previously, Reflex will be right up your street, but anyone who has always found the series to be a bit twitchy won’t suddenly fall in love with this latest offering.

Despite some effort to make Reflex more than just another MX vs ATV game, it's ended up feeling very similar to what's gone before it.
6 Reflex controls are a good addition Great draw distances Some weird physics Feels very similar to previous games