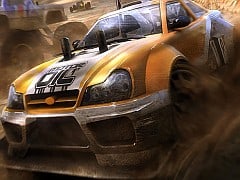 MotorStorm RC is my favourite Vita game. It’s also the cheapest game currently available for the handheld. Those two points don’t sound like they make sense together, but Evolution has really pulled a rabbit out of the hat with this pint-sized gem. In a portable gaming marketplace dominated by iPhones and the App Store, this is exactly the kind of digital-download title Sony should be releasing.

RC’s success is down to two factors: the arcade handling model, and the superb integration of challenges and leaderboards. Although taking the MotorStorm name, using many of the series’ vehicles, and basing the sixteen tracks on the four locations of the previous titles (desert, jungle, arctic and apocalyptic), this doesn’t really feel like a MotorStorm title.

You drive a selection of RC cars by using the Vita’s analogue sticks as if they are controls on a real toy’s remote – right stick handles movement forwards and backwards, while the left is for steering. I found it a tiny bit awkward initially, but settled in to things after a few races. The heavy, trying to steer a boat around a corner while on dry land, physics model of the big-brother MotorStorm games has been scrapped in favour of a nippy, responsive yet slide-friendly model.

The vehicle and road surface both make a difference to the handling, with some combinations allowing for near-top-speed driving around all corners, while others require careful use of the accelerator and brake to ensure you don’t let your vehicle’s back end slip out too far during a slide.

Despite the fun Micro Machines-esque aesthetic, MotorStorm RC requires a great deal of skill and concentration – as proved by the latter challenges that take considerable effort to complete with the highest triple-medal rating. None are trickier than the drift events, tasking you with accruing drift points within a certain amount of time – the highest award essentially requiring you to drift almost continually.

In search of a decent comparison, RC feels how I’d imagine the DiRT series would play if viewed from an overhead perspective – itself a series with handling that varies wildly between cars and tracks – or a kind of modern-day Super Off Road. A birds-eye view isn’t the only option available, but I found the other three cameras (all a lot closer to your vehicle) didn’t offer enough visibility.

Circuits here are short compared to your average racer, with lap times generally in the 20 second range rather than the minute and a half that is more common of the genre. This encourages replaying events, and removes frustration usually caused by failure – if you mess up here, even if you’re playing a 4-lap race event (the easiest to fail on the last lap due to AI driver interference) you’ve only put in a minute or so of time, so there’s no great hardship felt in retrying.

And retry you will, especially when connected to PSN and being constantly told how your friends are beating your fastest times. All events have leaderboards, but more important is a Facebook-style feed that updates you on who’s doing what – simply select an update that says a friend has beaten your fastest time and you’ll be taken straight to that event to try and outdo them, complete with a ghost line that represents their performance.

Add in Facebook and SEN messaging, as well as actionable pop-ups while you’re playing and the sense of being part of a community has rarely felt greater. Boiled down it’s highly similar to what EA did with Autolog, but RC fits the try and try again style of play even better.

At just £4.79 there were bound to be a few concessions with MotorStorm RC, and they are mostly visual. The framerate isn’t as solid as I’d have liked (although rarely a problem) and if you’re expecting detail on par with the PS3 games you’ll likely feel disappointed. Tracks bathed in an orangey sunset light generally look the most impressive, but there’s no comparison between this and current Vita graphics king WipEout 2048. Perhaps thanks to this, loading times aren’t overly long – especially when compared to some of the other Vita games currently available – and crucially restarting an event is instant.

Of all the Vita launch titles, MotorStorm RC is the most natural fit for short gaming sessions. It’s ideal to jump into for a few minutes, but that doesn’t prevent it from being a huge timesink once its hooks are in. Thanks to the excellent leaderboard integration RC – a game without any direct head-to-head multiplayer – offers a greater sense of competition than many standard racing games, and will tug at you time and time again.

MotorStorm RC is also available for the PlayStation 3. If you buy either version, you’ll be able to download the other free via PSN providing you use the same account on both devices. Your profile is synchronised across both versions, meaning progress made on one will carry over to the other. The PS3 game includes extra features, such as four-player split-screen and two-player single screen multiplayer, and high resolution visuals.