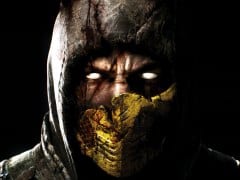 I’ve just punched someone so hard in the crotch their head came off. Johnny Cage has left a signed headshot on the corpse and departed, presumably to fight the next soon-to-be bow-legged victim. This is the Mortal Kombat experience, in one finisher. It has always found itself in the position of “not hardcore” enough to stand alongside the BlazBlues and Street Fighters. Yet the fact that NetherRealm refuses to take itself seriously, while offering something that no other fighter can – a decent story mode – means it’ll hold my attention far longer than any other brawler.

The obvious talking point, as ever, is MKX’s violence: both absurd and spectacularly entertaining. Brutalities, X-Rays and Fatalities are animated in vicious detail, so much so you’ll enjoy repeated viewings, mainly because there aren’t many places where you’ll see intestines pulled through people’s throats outside of some horrendous Reddit thread. MKX also sees the return of the discipline system, where each combatant can choose from one of three fighting styles. It’s a great way to spice up proceedings and give greater tactical variety to the already sizeable roster. Combat itself is typical Mortal Kombat, with simple input commands for combos that won’t induce carpal tunnel syndrome, and even newcomers can flow from one attack to the next to produce entertaining matches.

For more casual players, beat-em-ups can struggle to live long in the memory, but Mortal Kombat works hard to keep you invested when you’re not actually fighting. First, there’s the Krypt. Everything you do earns Koins, which can be spent in the Krypt to unlock new concept art, costumes, Test Your Luck modifiers, Fatalities and more. It works in much the same way as in MK9, with many of the unlocks offering something beneficial to gameplay. While concept art will often be ignored, unlocking new fatalities for frequently-used characters gives you reason to keep popping back to purchase more.

Mortal Kombat X’s story mode stands out as one of its strongest elements. While other fighting games often won’t indulge character lore via an in-depth narrative, opting instead to let the player choose a single fighter who plays through to be rewarded with a short cutscene, NetherRealm does things differently. It tells its tale through a series of chapters: whichever character is the centrepiece of that chapter will be the controllable fighter.

Players always have the choice to skip a fight, should it prove too difficult or simply to move the plot along, and the story is enjoyable enough to keep you wanting to find out what happens next. The cutscenes between fights tend to overindulge in QTEs, but other than that it is an excellent mode, constantly rotating through the fighters and, more importantly, their high-impact moves. It’s the best framework for the series’ strengths: while Mortal Kombat may not be a series that can offer the technical depths of other brawlers on the market, the fact that it is willing to contextualise its roster within its lore in the game itself is something that keeps those like me interested. By creating ‘All-Star’ matchups with a small cutscene, it elevates the fights beyond a simple one-on-one brawl.

One of Mortal Kombat’s traditional modes, Towers, has also seen a revamp, now dubbed Living Towers. Rather than continue as the generic arcade mode of the series, NetherRealm has made it a regularly updated feature which players can return to and post scores for their friends to best. With Hourly, Daily and Premier Towers, players can take on different challenges and see how far they make it. It’s a shame that the strength-based Test Your Might Tower doesn’t receive the same treatment, as after making it to the top, I found little reason to return. Test Your Luck, on the other hand, is the most interesting addition. Fights will see random modifiers generated, such as double speed or random bomb drops, which can serve to create more entertaining or frustrating encounters. It’s purely luck of the draw, but overall it makes fights more interesting. For the traditionalists, the regular Towers remain, too.

With fighting games requiring pinpoint precision and timing, input lag in online multiplayer is a noticeable and disappointing issue. Each of the online matches I’ve played has suffered with input delay. When trying to pull off special moves or X-Rays, having to wait half a second for the command to pay off in the fight is nigh-on impossible to compensate for, and more often I’ll fail to do the attack. It remains to be seen if this will be fixed, but it’s not a great start.

Overall, however, Mortal Kombat X is the most entertaining fighting game on next-gen. It’s bonkers in the best possible way, serving up some eye-watering kills (Cassie Cage’s X-Ray move will make every man wince, every time) and entertaining matches that don’t require great skill to create. Depth lies in learning each character as the story introduces them, which forms a springboard to use them in other modes that surround it. Story mode is engaging enough to keep you plodding through in short bursts, the Krypt offers content that will make you want to earn the Koins to unlock everything, and all other modes change up the combat enough to keep you interested. This is the best Mortal Kombat game, and also the most hilariously brutal.