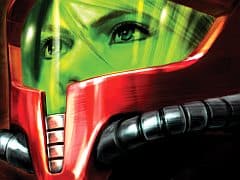 Metroid Other M is one of the best Wii games I’ve ever played, easily bettering the usual dross Nintendo’s waggle console is treated to, but it doesn’t half have its fair share of problems. Developed by Team Ninja, the studio behind Ninja Gaiden, this is Metroid like you have and haven’t played it before. With elements of retro Metroid gameplay, first-person shooting and third-person action, Other M feels both new and old, yet is let down by its more modern touches. It is – shock, horror – a Nintendo game with FMV and voice acting.

Rather than getting bogged down later on with the things that don’t work, I’m going to get them out the way first. The attempt to tell a deep story, with impressive CG work and plenty of voice acting, falls flat almost immediately. The opening sequence of the game is almost devoid of any gameplay at all, packed with awkward dialogue that seems way out of date in comparison to what we’ve seen in other titles released in this generation.

In terms of where Other M fits into the Metroid timeline, things pick up almost directly after the events of Super Metroid, with the intro CG sequence showing the final battle with Mother Brain in the SNES title. Samus escapes from Planet Zebes and ends up on a Galactic Federation ship, before investigating a distress signal on the Bottle Ship – a hulking great vessel the size of a small city.

Things take a turn for the worse when you realise that Samus is joined in the desolate space station by a team of Marines, which means she actually converses with them and they call her things like “Princess”. It’s easy to be a little too precious when it comes to classic franchises, but other than the suit the opening to Other M didn’t seem very Metroid at all. Initially it also seems that Team Ninja, not wanting to disappoint its fans, has focused a little too much on our heroine’s curvy figure, something that should be left in the Dead or Alive series. But things very quickly get a whole lot better.

Other M is played with just a Wii Remote, with no Nunchuck or Classic Controller support. This is odd for a number of reasons, but has clearly been done to allow gamers to switch from third-person perspective to a first-person view – albeit one that pins your feet to the ground, only allowing you to aim.

In third-person you play with the controller held like a classic NES pad, moving Samus with the d-pad, shooting with the 1 button and jumping with 2. Holding down 1 powers up Samus’ gun, and you can recharge her health and refill her missiles by holding down A and pointing the Remote upwards. Pressing A alone transforms our heroine into the Morph Ball, which can lay bombs and is small enough to enter tiny passages. Finally, by pointing the Remote at the TV you look through Samus’ eyes and fire missiles or scan the environment.

Combat mixes all these styles of play, with Samus regularly needing to switch between running and gunning, first-person shooting, bomb-laying, puzzle-solving (read: shooting a switch) and the odd bit of melee combat. Early enemies are easy to tackle, requiring little more than repeated firing, but tougher baddies demand far more competent skills. Samus can dodge incoming attacks with well-timed presses of the d-pad, and perform special finishing moves – leaping onto the backs of monsters and fire charged blasts into their heads

In general the combat is excellent, with Samus leaping around like a gun-toting Ryu from Ninja Gaiden, but when the game more or less forces you to use the first-person view mid-fight, things get a little clumsy. Samus will aim in the direction she’s facing, and it’s very easy to accidentally switch from third-person to first-person and end up facing a wall instead of the enemy. Aside from the scanning sequences (which on occasion require you to find bizarrely-placed objects), Other M would have been a better game without the first-person gameplay. This would have allowed the developer to include Nunchuck support, in turn giving you analogue control in a 3D world. As it stands, it’s akin to controlling Mario in Galaxy with the d-pad. It’s not perfect, but isn’t as much of a problem as I initially expected it would be.

Problems associated with the storytelling and first-person gameplay can be forgiven, as the rest of the experience has been expertly crafted. The classic mechanic of slowly gaining new abilities and weapons, allowing you to access previously locked-off areas, is present and correct, although the way certain abilities – such as a speedy run that lets Samus charge through walls and leap across chasms – are seemingly turned on at will by the commander in charge is somewhat odd. It’s fair enough as a gameplay mechanic, but makes little sense in terms of the story, as these abilities would have been very handy earlier on.

Boss battles are often spectacular, taking place regularly throughout the campaign across all the game’s locations. You’ll generally have to target a weak spot numerous times before performing a deadly strike, but some of your foes take genuine gaming skill to beat. Despite the space station being devoid of other human life, there’s barely a dull moment as Samus tackles wave after wave of nasty beasts or leaps around to traverse the complex structure.

Wii games often fail to dazzle visually, but Other M does what it can with the hardware to create a well-realised environment. It’s often a little drab, but that works well to help create a brooding atmosphere. While the space station is generally a metallic grey, holographic technology has created jungle, lava and snow scenery that is up there with the best we’ve seen on Nintendo’s little console. It’s perhaps not quite as spectacular as Metroid Prime Corruption, but compared to the plethora of other titles released every week, it’s in a completely different league.

Metroid Other M is one of the most accomplished action games on the Wii, but it’s let down slightly by some clumsy controls and awkward storytelling. These issues are by no means game-breaking though, with the classic Metroid gameplay, Team Ninja-style action and 3D environments combining to create an excellent entry in the franchise.

Metroid Other M is one of the most accomplished action games on the Wii, but it's let down slightly by some clumsy controls and awkward storytelling.
8 Great third-person action Classic Metroid feel Storytelling isn't great First-person combat is clumsily implemented

An all-new entry in the Metroid franchise.

An all-new entry in the Metroid franchise.