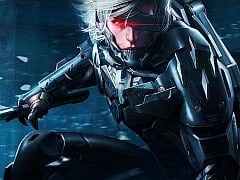 Metal Gear Rising: Revengeance has one of the best opening levels of the current console generation. It’s a terrifically paced piece of spectacle gaming, a blend of brisk, smartly edited cutscenes and fast, slickly choreographed action. There’s a supreme confidence about it, a cocksure swagger that says this is Metal Gear, but not as you know it. This is a Platinum game, not a Kojima game.

It has a few strands of Metal Gear in its DNA, sure, but not its bones. This is Platinum’s forte – a violent third-person action game that sees you move from one combat encounter to the next, and which ends each mission with a gargantuan boss fight. This first glimpse of what is to come is everything you’d expect – and hope – from this talented studio, and more. By the time it’s over you’re left breathless with anticipation for what could be one of the best pure action games in years.

Tragically, it doesn’t quite turn out that way.

Those first two words in the title are part of the problem. The game’s most playful moments, its gags, and sly references (a late game nod to Kojima’s fondness for nanomachines seems destined to become a meme) suggest Platinum relishes the sillier side of Metal Gear. But the po-faced politics, the attempts at serious social commentary, and a disturbing plotline that centres on harvesting the brains of destitute kids never quite sit right.

That unique blend is a series trademark, but Kojima has always managed to find the right balance. There are elements here that work, most notably an examination of Raiden’s capacity for violence that simultaneously touches upon the complicity of the player. But it often fails to strike the right tone, and some scenes are downright embarrassing, notably a series of exchanges involving a young NPC who speaks in subtitled patois.

Few play Platinum’s games for their stories, granted. Yet it’s a surprise to see other elements familiar to Metal Gear – introduced, presumably, to appease the fans – so clumsily implemented. Though there’s that same unmistakeable thrill of a perfectly executed stealth kill, instances of genuinely sneaky infiltration are rare. Not least because half the levels don’t seem designed for it, and at other times you’re merely avoiding the game’s most enjoyable element: its combat. Admittedly, the cautious approach is recommended during certain stages, with motion-tracking machine guns proving a constant irritant when you’re trying to fight.

The sub-weapons, meanwhile, feel almost entirely extraneous. Sure, they might be part of the Metal Gear universe, but Raiden’s a scalpel, not a sledgehammer, and watching him hoist a rocket launcher onto his shoulder looks decidedly weird. Such projectile weaponry is occasionally handy for airborne opponents, but given that you’ll instantly alert enemies by using them, it completely negates the idea of stealth. And when it comes to close-quarters combat, you’ll rarely get the opportunity to use anything: by the time you’ve readied a grenade, or aimed a guided missile at a target, you’ll have an enemy or five all up in your grill. The odd EMP grenade is ok for a bit of emergency crowd control, but otherwise you’re best off simply unsheathing your sword.

Good job, then, that hitting things with a sharp metal blade is such brilliant fun. Normal and strong attacks string together into combos that verge on the balletic, while a squeeze of the shoulder button activates Blade Mode, where the left and right sticks allow you to aim your slices more precisely. On the lower difficulties, it’s self-expression in the manner of a sashimi chef; on higher settings, you’ll need to resort to a bit of tactical dismemberment. Harm an enemy enough with your basic moves and you can start to lop off limbs, but if you slice an opponent in the right place – indicated by a glowing red square – Raiden will reach inside their freshly sliced body and pull out a glowing blue core to replenish his energy. This simple mechanic allows Platinum to pose a challenge from the off, in the knowledge that each enemy vanquished represents a chance to regain energy. They may be deadly, but at the same time they’re all potential walking health packs. It might be no different from a fallen foe coughing up a medkit with his dying breath, but recovering energy has rarely looked so fucking cool.

Larger foes usually require a bit of sword-assisted undressing. A slash here and there removes their armour, and then they’re ready to have their spine ripped out. There’s a great variety of enemies, from Gekkos to disarmingly quick gorilla-like mechs that leap, squeeze and pound. The best form of defence, however, is to go on the offensive- a light attack with the left stick held in the direction of your opponent allows you to block or parry incoming blows, indicated by a red glow: time it perfectly, and you can pull off a counter. A yellow tinge to an enemy tell, however, means you need to sprint or jump out of harm’s way, as there’s no dodge. Bosses are impossibly quick or impossibly large – occasionally both – and while they’re noticeably trickier than the encounters that precede them, they’re mostly entertaining fights with fittingly cinematic flourishes.

There’s one major caveat: the camera. The exemplary first stage suggests it won’t be an issue but a journey into the sewers (the existence of a sewer level should be a warning sign in itself) is particularly problematic. It requires constant shepherding as it struggles badly with walls and certain enemy types – encounters with the aforementioned apelike cyborgs will often see your view jerk up to the ceiling as your simian foe leaps into the fray. Elsewhere, scenery has an annoying habit of getting in the way: one encounter in a tiny room saw me fighting with an obstacle obscuring both Raiden and his opponents with no way of manoeuvring the camera into a better position. It leads to a number of unavoidable hits, which can be fatal on the harder difficulties: the parry mechanic may work brilliantly for the most part, but it’s hard to deflect attacks you can’t see because they’re coming from the opposite direction to where the camera is pointing.

It’s less of an issue on the Normal and Easy settings, but it’s criminal in a game that so prizes efficiency, particularly as it seems you need to avoid getting hit for a coveted S rank. The points you earn after battle feed into a currency that can be spent on upgrading either Raiden’s abilities or the weapons he’s earned from beating the bosses. Each of these has its own particular strengths, from sais that are deadly at close range to a longer, stronger blade, but the staff-like weapon earned from the first boss is the sensible choice: it extends Raiden’s range much further than his standard sword and can be upgraded earlier than the others.

These points can also be used to purchase new moves, yet incredibly, the game doesn’t bother to tell you how to use them. Indeed, it’s pretty terrible at tutoring you in anything. While few players want their hands held all the time, a quick run through the basics would be nice. A range of VR missions that can be accessed at any time is the most useful way to learn the ropes, not least because it teaches you things the campaign keeps quiet about, but otherwise it seems like a game designed to sell strategy guides.

Some will find such niggles forgivable, but they impinged on my enjoyment of a game that could and should have been spectacular. And in its best moments, it genuinely is: Platinum revels in allowing you to participate in the kind of action sequences commonly reserved for cutscenes, and so it’s no surprise that you’re in control when the time comes for Raiden to sprint up the side of a skyscraper, dodging missiles all the way.

When you’re slicing cyborgs apart and spilling the red stuff everywhere, like the world’s most aggressive tin opener going to work on a can of tomato soup, you’ll wish for all games to be like this. But these moments aren’t enough to compensate for the glaring weaknesses that make Platinum’s take on Metal Gear a very good game instead of a wonderful one. Revengeance is pretty sweet, then, but the aftertaste it leaves can be disappointingly bitter.

Niggles keep Revengeance from reaching its full potential, but this is yet another satisfying effort from Platinum
7 Cutting up cyborgs simply doesn't get old Raiden is great fun to play as – fast, responsive and wonderfully vicious Some wonky plot points and terrible dialogue The camera is hopeless at times