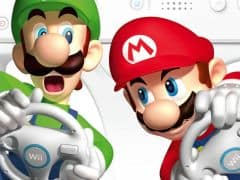 A Mario Kart game on a Nintendo console is about as unexpected as Peach being kidnapped by Bowser, but that doesn’t make the arrival of Mario Kart Wii any less exciting. Anyone old enough to remember the SEGA vs Nintendo War will likely have fond memories of at least one Mario Kart game, even if the GameCube’s Double Dash didn’t really live up to the series’ strong heritage. With more than a little to prove, Nintendo has really gone to town with its Wii entry in the series, with features that will please hardcore gamers and newcomers alike. But has this resulted in a halfway house of a racing game or arcade racing perfection?

What’s immediately obvious is how accessible the game is. Mario Kart has never been a deep game in the traditional gaming sense, but Mario Kart Wii’s inclusion of the Wii Wheel peripheral is a masterstroke. Although little more than a shell for your Wii Remote, being able to turn a wheel instead of using an analogue stick (or even tilting a controller) is immeasurably better for a novice gamer. The key is that it actually works. Motion control in racing games has been patchy at best, even in previous Wii titles, but here it’s brilliant.

It’s not brilliant to the extent that hardcore gamers should choose to use it over Wii Remote and Nunchuck controls though. The game places a big emphasis on power sliding, and although this is perfectly possible on the Wii Wheel, it’s far from ideal. Using the Nunchuck’s analogue stick to steer your kart is simply a lot easier, especially if you’ve been playing games that way for years. In a similar system to the power slides from the Nintendo 64 game, a held power slide will give you a mini turbo boost, effectively letting you turbo out of every corner. Hold the slide even longer and you’ll get a Super mini-turbo, which boosts your vehicle for even longer.

Turbo boosts come from other sources too. By flicking the Wii Remote (or wheel) up, down, left or right just as you jump off a ramp your character will perform a stunt, which gives you a boost on landing. Tail another racer and you’ll gain speed by being in their slipstream. It’s fair to say that the best lap times on the Time Trial mode are clearly going to come from players who make most use of the boost system. Although the game offers an auto power slide option, which is great for newcomers, it removes your ability to jump and therefore prevents you from power slide boosting.

Also new to the Wii game is the ability to race bikes. Far from being just a superficial addition to the series, bikes handle significantly differently to karts. They’re far more nimble around the tracks, able to corner sharply, especially when activating a power slide which results in a turn so sharp you’ll likely go flying into the road-side obstacles unless you’re careful. You’re limited to mini turbos while on a bike but this is countered by being able to perform wheelies at any time, which make you travel faster than normal. While performing a wheelie your steeling is severely limited and you’re vulnerable to barges from other vehicles, but it’s worth the risk.

If anything it’s a shame that the core Grand Prix mode found in Mario Kart Wii isn’t as hardcore as many gamers would like. Once again, weapons play a big part in each race’s outcome, and the usefulness of these pick-ups depends on your position in a race. If you’re near the back of the pack you’re quite likely to be given one of the most disruptive weapons, such as the lightning strike, auto-pilot-like battering ram Bullet Bill and POW Block, which spins any vehicles travelling in front of you. If you’re at the front you’ll be lucky to get even a red homing shell. It is of course designed to keep the pack close together, but unless you rethink your racing strategy (perhaps hanging back until the last few corners) you’ll repeatedly be hit by shells and other nasty weapons.

As with Mario Kart games over the years, you’ve once again got the usual 50cc, 100cc and 150cc races, although this time the latter mixes bikes in with the karts. 50cc isn’t going to be much of a challenge to experienced players, but 150cc can be extremely tricky and quite infuriating. It’s the plethora of unlockables that will keep you plugging away though, with vehicles, characters and reverse track layouts to race for. Each character is classed according to weight, which in turn gives them differing Acceleration, Top Speed and Off-Road stats. Your vehicle choice will also affect handling and performance, so it’s not just a case of picking the kart or bike you think looks the nicest.

The track choice in Mario Kart Wii is likely to divide opinion. With 32 tracks in total it’s by no means short on content, but half of these are remastered versions of tracks from Mario Kart on the SNES, Mario Kart 64, Double Dash on the GameCube and Super Circuit on the DS. For fans of those tracks they’re a great addition to the game, but others will be left asking where their favourite tracks are – Koopa Trooper Beach on the N64 for example.

Visual quality also varies wildly, with the SNES remakes looking basic in the extreme, while the brand new tracks are full of detail. Running at a fairly consistent 60 frames per second during the single-player game, Mario Kart Wii isn’t ugly by any means, but there’s a definitely lack of cohesiveness between the tracks. Audio is largely what you’ll expect from a Mario Kart game, with many tunes carried over from previous titles. At times the gleeful music can be quite maddening, but it’s Mario through and through.

Multiplayer is really the biggest draw of any Mario Kart game though, and Mario Kart Wii is no exception. As always, you’ve got basic four-player split-screen support for solo or team races (no two-player support in Grand Prix mode sadly), although the frame rate is slowed considerably with the screen split into four and the graphical quality is reduced significantly. While disappointing it’s not a huge problem, with the game remaining more than playable. Aside from racing you can compete against others in a classic-style balloon bursting battle mode or play in teams to collect the most coins. Balloon burst doesn’t feel as good as it did in the SNES or N64 incarnations of the game, but it’s still fun for a few wasted minutes here and there.

Online you can race against a maximum of 11 other players (including a friend playing split-screen on the same console), and the overall implementation is far and away the best Nintendo has ever done. You’re still going to have to put up with the game specific friend codes and invites, but once you’ve got all your friends listed it’s not a problem. In fact, playing with randomly selected players isn’t bad either, primarily down to the lack of voice chat – the one thing that often ruins online games on other systems. The Mario Kart Wii Channel is icing on the cake, with leaderboards and downloadable time trial ghosts. The functionality isn’t up to par with something like Forza 2 or PGR4, but it’s more than good enough for what is essentially a fun arcade racer made for everyone.

Mario Kart Wii is an excellent return to form for the series and tremendous fun when played with friends in split-screen or online. The often infuriating Grand Prix mode is likely to polarise gamers though, with some loving the unpredictability of it while others will simply give up after being taken down at the last minute by yet another Spiny Blue Shell. Other than online play, which to be honest isn’t anything over and above what the majority of racing games include these days, Mario Kart Wii is pretty much more of the same fun gameplay, with the addition of a brilliant wheel that will do wonders to encourage newcomers to give the game a try.

Mario Kart Wii is pretty much more of the same fun gameplay, with the addition of a brilliant wheel that will do wonders to encourage newcomers to give the game a try.
8 Online is brilliant Some depth to the racing Great fun Infuriating at times