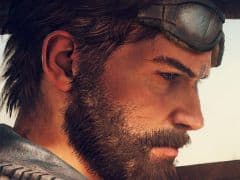 The spider diagram of derivatives and inspired-bys between the 1979 Mad Max film and the 2015 Mad Max video game would be a horrendous thing to navigate. The movies, particularly the first sequel, kicked off many of the tropes that creators of post-apocalyptic worlds now rely on as visual and cultural touchstones. A desert pebbledashed with burnt out cars; an angry, poorly-fed population cutting about looking like they’ve just arrived fresh from the London punk scene in 1977. This is Fallout, this is Metro 2033, this is the future bits in the good Terminator films. And the bad ones, I suppose.

Coming full circle like this, the wasteland feels far too familiar. There’s little about this world that’s notable now, aside from the nagging sense that these people spend far too much petrol on blowing things up for a society which is meant to have collapsed due to a fuel shortage. Also at first, compounding the problem, it feels rather empty. Most of the enormous open-world map (and it is enormous – this is an Avalanche Studios title after all) is taken up by vast expanses of dusty, beautifully lit nothing.

But after a few hours, you realise why; half of the game happens at 100mph. The car combat is fantastic. Much of the thing sees you getting into scraps with hostile vehicles, dispatching them with various combinations of ramming, deft harpoon work, shotgunning tires and numerous other tactics.

Clearly sharing some DNA with the signature weapon of Just Cause 2, the harpoon will be your go-to weapon, as it is the only one that doesn’t consume ammo and can stop an enemy rig in its tracks pretty easily by yanking out the driver and smashing him into some rocks. Which never, ever gets old. You’ll be using the harpoon constantly throughout the experience, as in addition to its role as a weapon, you also need it to pull down the various structures that need, er, pulling down, open all the gates that need to be ripped open, and catch all the flying loot drops that are spawned when you’re caught in one of the deadly storms, which occur at random – although not often enough to be annoying – and will kill you if you don’t scarper pronto.

All of this occurs at high speed – one battle can easily take you halfway across the map. Aside from random encounters, many story and side missions require you to hijack vehicles with which to complete specific tasks later on. It adds up to a lot of driving.

The world needs to have lots of empty bits for all this nonsense to work, and it works brilliantly. Taking direct inspiration from Mad Max: Fury Road, the road battle system is set up to provide that same kind of vehicle-exploding spectacle, and is by far the game’s best component. The rest, however, is a mixed bag.

Mad Max is a sort of dumbed-down Far Cry 3 with cars, except Far Cry 3 had cars, and was dumb, but listen. In addition to the car combat, the meat and potatoes of the experience involves capturing outposts. There are loads on the map, and there are a few standard types – oil pumping stations, oil transfer stations, strongholds of particular lieutenants – and one or two unique ones that pop up in story missions. The process is essentially the same for all and vaguely Far Cry-esque. You scope out the camp from afar to mark your targets, decide on a strategy, and have at.

It’s a popular gameloop, one even adopted (and perfected) by Hideo Kojima for Metal Gear Solid V, which is quite the endorsement. The issue here is that the ‘decide on a strategy’ part of the sequence tends to boil down to ‘which gate do I smash open first’, if there’s even an option. Most of the time there’s only one gate. There are sometimes hidden entrances, but using them makes little difference to the ensuing sequence of events.

All the outposts are essentially linear areas, which you work through methodically – batter the men, collect the stuff, explode the thing. There are of course variations in the layout of the camps (as far as I can see they’re all unique areas, despite using all the same assets), and the objectives often require bit of hunting around to actually find. But essentially, you’re doing the same thing every time. The on-foot combat here is another variation of the Batman: Arkham Knight combat we’ve seen hundreds of times now, but it works, and a good number of unlockable skills along the way ensure that new tactics are always being thrown into the mix.

It’s mostly a case of hammering square to punch folk, but tactical use of your, for example, shotgun and shoulder charge abilities can quickly turn the tide of battle. Tedium can easily set in after doing it a dozen times, and if you want that 100% completion, you’ll have to do it a lot more.

There are other things to do around the world. Death races are fun, with twists like having a bomb strapped to your car that goes off if you don’t complete the course in time. Side missions given to you by various NPCs are reasonably varied, ranging from find-the-thing and explode-the-thing to kill-the-man or break-the-man-out-of-prison (although the latter may only happen once).

Everything you do provides opportunities to earn scrap, either directly as a result of completion or incidentally as a result of finding it on the floor of wherever it is you’ve been sent to blow up something. Scrap is the main upgrade currency of Mad Max, and the process of levelling your car, your Max and his equipment drives everything in the game. All tasks feed into the levelling hook. Captured outposts generate regular scrap. Completing challenges gives you upgrade points that allow you to augment Max himself with more health and higher damage stats, and these challenges are often things like ‘kill ten men with a gun’ or ‘drive a car’, so you’ll be completing them without even trying for the most part.

The story feeds off this levelling/upgrading lark too, because essentially the plot is ‘Mad Max needs a new car, but like, a really good one, so off you go’. That said, it’s actually not too bad. The writing, acting and direction of the numerous but mercifully short cutscenes isn’t going to win any awards, but they’re perfectly satisfactory, and miles ahead of those found in stablemate Just Cause. The story takes Max around the wasteland to buddy up with the warlords that control different regions, exchanging favours and back-scratches to get bits for his car, or constant supplies of ammo, fuel and water. The main story and side stories can seem convoluted, but the focus never drifts from what’s established in the first five minutes of the game: Max needs a new car.

It’s so gloriously stupid, and all the better for it. I dread to think what would have happened if they’d tried to take it seriously.

It’s also quite the looker when it wants to be. The lighting is gorgeous, generating many radiant nuclear sunsets that glint so beautifully off the rusted husks of long abandoned cars that they almost force you to fire up photo mode to show off your digital photography skills on Twitter. Avalanche have nailed beauty from desolation. On paper, this world is depressing and ugly. In motion, it’s exquisite.

Mad Max, the game of Mad Max, the game of the films, except not really (the game of some of the themes from the films?) is derivative of so many things, it’s hard to play it without making a list in your head of all the other titles it reminds you of. Aside from the obvious Fallouts and Borderlandses, the game I keep coming back to is last year’s Shadow of Mordor, from the same publisher. Both are tie-ins of popular film franchises. Both are mostly devoid of truly fresh ideas, and both are open-world romps filled with samey tasks to do. But crucially, they’re both a lot better than they have any right to be, given the previous points.

In Shadow of Mordor’s case, it was easy to point at its Nemesis system as the flash of brilliance that elevated it above much of the rest of the genre. That single innovation made a mediocre action adventure into an exceptional one. In the case of Mad Max, what makes it is rather more complicated, but I think it’s got a lot to do with competence. Every component of Mad Max is at least satisfactory: at best, fantastic. While it mostly relies on a tried and tired Ubisoft-open-world formula, the exhilarating car combat, the gleeful punk-rock absurdity of its world and the characters that populate it, and its almost flawless presentation make it something more than the sum of its well worn parts.

The best summer drought game ever speeds into view at precisely the wrong time.
7 Exhilerating car combat Looks smashing Very Ubisoft-y, full of samey tasks Nowhere near as clever as the films it's inspired by