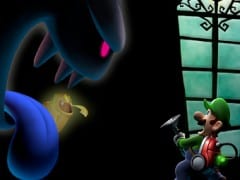 Being the less recognised half of a duo is tough. What do you do when your brother suffers from a mega case of short-man syndrome and an insatiable thirst for the spotlight? Naturally, you back away into sheepishness, left to snatch at any leftover scraps of fame. There’s a reason why it’s Luigi’s Mansion and not Mario’s, after all. If it were up to the red guy, he’d strut in, chest puffed out like a pigeon and the job would be done in 15-minutes. Game over. May as well trade it in, mate.

Luckily, that’s not the case. The game’s basic setup is simple: the Dark Moon has shattered, releasing hordes of ghosts to run wild, and the barmy Professor E. Gadd has called in Luigi to help. Armed with a Poltergust, a Strobostrobe and a Darklight – a modded Dyson for capturing ghosts, a flashbang bulb for stunning them, and a UV ray for discovering hidden illusions – it’s Luigi’s job to venture into each mansion, collect the Moon shards, piece it back together and restore order to Evershade Valley.

As an exclusively Luigi affair, the game is packed full of the bashful appeal that’s synonymous with the less-seen brother. Each of Luigi’s little characteristics adds another neat touch to the game’s personality. The way he hums along to the soundtrack to distract himself from being scared; the way he calls out to see if anyone is lurking in the shadows. Meticulous attention to great animation and character details brings the game to life.

This is true of the mansions, too. Each has its own neat idiosyncrasies, mixing fresh and clichéd ideas but never succumbing to over-familiarity. The first is a classic haunted house while the second is more eccentric, with a huge tree growing through the centre. Later locations edge away from the aforementioned haunted house vibe, but are still firmly grounded within Mansion 2’s aesthetic. Everything looks gorgeous, with the cartoony design acting as a great fit for the 3DS’ limited hardware, while the lighting effects accentuate the spooky atmosphere. The 3D effect is also impressive, although retaining that ‘sweet spot’ can be difficult when battling a handful of spectral nuisances.

Plodding around dirty houses with a vacuum cleaner might sound laborious, but it’s far from it. Luigi’s Mansion 2 is more objective-based than its predecessor, and each stage has you trekking after an item or chasing down a target ghost. Despite being less free-form, it’s still wonderful to play. The objectives provide strict aims, but you’re free to explore each mansion as you please. Investigating every nook and cranny almost always reveals something interesting, funny or rewarding. The amount of stuff hidden just out of sight, just out of reach, means that you feel more like a detective than a cleaner. I was still stumbling across hidden rooms on my third retread of some of the initial missions; credit to the brilliant design of each mansion.

To catch ghosts, you stun them with your strobe and then suck them up with the Poltergust until the health bar hits zero. This is a case of pulling against the spook, like a supernatural tug-of-war. Fighting Greenies, the basic foe fodder, never becomes that challenging, but as more complex types are introduced you’re pushed to be more tactical, and combat develops into something much greater than the sum of its parts. Later ghosts are extra devilish, popping in and out of visibility, forcing you to utilise the Darklight to reveal them. This switching back and forth between torches adds yet more depth, with the risk and reward factor of flashing a quick burst on one ghost, or charging a more powerful ray to stun multiple spooks for a larger prize. The detailed environment becomes integral to combat, too, and you have to keep an eye on any beds, bookshelves, and even a grand piano, in order to hunt down your targets. Being surrounded by multiple types of ghost, each doing their thing, and managing to slickly pick them off one-by-one, dodging all damage heading your way, is deeply satisfying.

The controls are surprisingly well adapted to the 3DS, too, and there were only a couple of times where the lack of a second stick felt like it was hindering progress; occurring in sections where a trio of particularly tough ghosts get in your way. It’s frustrating to have to restart the entire mission again if you die, but for the most part Luigi’s Mansion 2 is one of the handheld’s best and most intuitive examples of single-stick controls.

Each mansion is a trove of collectibles and hidden cubbyholes; a hive of things to fight, secrets to find and puzzles to solve. This is a 15-hour long game, but you could easily extend well beyond that if you want to discover every hidden gem, catch every Boo mini-boss, or improve your star rating for each stage. A time-trial ghost hunt is unlocked for each mansion once you catch a Boo in every level, and although the bonus stages add nothing more to the narrative, you’ll want to find every Boo because snooping around is constantly rewarding. Once combat and exploration gel together, rummaging around becomes second nature, and the addictive routine of checking rooms from top to bottom restrains you from rushing through and missing the game’s hidden treasures. That the game manages to entice you into its world with such simple mechanics is proof of the creativity on show here.

The ghost hunt extends online in a trio of co-op Thrill Tower modes. Hunter sees you chasing spooks against the clock, Rush is an intense search for a hidden hatch before the half-minute limit runs out, and Polterpup has you tracking down undead pooches. The latter of the three modes is the most fun, but the others still provide interim enjoyment. Each implement competitive elements, awarding bonuses to the best ghost hunter and so forth, adding something more engrossing than each mode’s basic objective and providing an incentive to be the best on the team instead of slacking behind.

There’s also an assumption that you’ve become pretty savvy with your tools, especially in Rush where you have to quickly coordinate with your fellow Luigis and find the hidden hatch or it’s game over. Teamwork is essential here, whereas you can mostly get away with being a lone wolf in the other modes, wandering off to try catch the most ghosts to snag those all important end-of-level bonuses. Single cart download play also features, which is an absolute boon if you’ve got friends who haven’t yet bothered to buy a copy.

But they really, really should. Luigi’s Mansion 2 is a joy, showcasing a love for characterisation and wonderful attention to detail that gives the game an inimitable personality. It never outstretches the limitations of the 3DS, but continuously proves the system’s lofty capabilities. Its few minor missteps don’t manage to detract from what is one of the best games on the handheld. If Luigi was a cockier guy, he’d be bragging like Mario, but we all know that’s not his style, and we’re luckier for it.

Completed single-player on normal difficulty in 15 hours. Played multiplayer for around 2/3 hours.

A few minor missteps don't manage to detract from what is one of the best games on the system.
9 Loads of stuff to find Brimming with character Great control scheme Abrupt level endings, lack of checkpoints