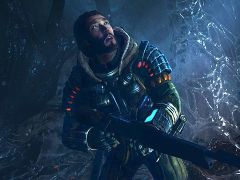 A mech without guns is like a fry-up without the bacon. You think it’ll be alright, but when it comes down to business it feels wrong. Your mech in Lost Planet 3 has no guns. IT HAS NO GUNS! It’s also slow, fights like a Real Steel robot controlled with Kinect, can’t fly, and breaks down more often than Britney Spears. But hey, at least it can turn into a fixed drilling platform so you can fight in dull Horde Mode-like sequences in the latter third of this prequel set on icy Akrid-infested planet E.D.N. III.

Lost Planet 3 isn’t purely a first-person melee mech-combat borefest, also offering third-person gunplay in the frozen wilderness and inside numerous outposts that might as well be ripped straight out of Aliens – you even get to turn on gun sentries and fight off scuttling creatures that nip about with the irritating speed and menace of say… Face Huggers. Other foes come in much larger sizes, and most feature classic weak orange body parts. Sadly, apart from a nasty bug that attacks like a porcupine off its face on antifreeze, standard Akrid never impress like those in the 2006 original.

Boss battles should have made up for this, but most aren’t big enough to wow, and the one that is enormous is used so often I was sick of the sight of it. In fact, every major boss returns at least once, bar the foe faced in the final encounter, which is a shame as the climactic battle is the only one I genuinely enjoyed – which after 14 hours on the game clock isn’t a great return.

Spark has made its best game to date, but fails on so many levels the end result is still only a notch above a complete washout. Enemies are dull, weapons are lacklustre (the shotgun is one of the worst I’ve ever used and the melee attack is appalling), the mech isn’t fun, and the multiplayer is blighted by similar issues that real-life foes can’t fix. More Kerry Katona than Heston Blumenthal.

Spark has made its best game to date, but Lost Planet 3 fails on so many levels the end result is still only a notch above a complete washout.
5 At times the sights are pretty The mech is boring Boss battles are tedious Weapons and melee attack are poor

Capcom’s sci-fi franchise returns under the leadership of a new development team.

Capcom’s sci-fi franchise returns under the leadership of a new development team.