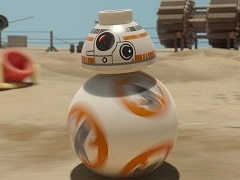 Lego Star Wars: The Force Awakens is the latest Traveller’s Tales Lego game, in a long series of such games, based on the popular Star Wars franchise film The Force Awakens. This sentence will already contain enough information for a lot of you; the Lego games are a bit of a one trick pony. It’s a good trick, don’t misunderstand me there, but how much mileage you give each successive performance is naturally going to vary.

This time around the pony (and for the purposes of this painfully extended metaphor it’s a plastic pony) is wearing a spangly new Star Wars costume. Lego TFA does, to its credit, capture the spirit of Star Wars – that swelling feeling of heroism and adventure – really well. It’s down in part to smart use of the film’s original score, but also to a galaxy map allowing you to travel between worlds and the wide central hubs those worlds have, which are bigger than ever before. They have characters going about their daily lives, and others giving little side quests to carry out in the area. These are some of the best parts of the entire game, with lots of weird little things to discover that, amazingly, give a genuine sense of exploration.

This can also be said of the levels themselves, albeit to a lesser extent. There’s a fidelity to the film, but the stages are expanded enough to make it an actual adventure for the player, and the story is fleshed out with bonus levels to unlock and play that add context: rescuing Admiral Ackbar from a Star Destroyer; capturing rathtars with Han and Chewie. Plus, and I don’t want to speculate on what Hollywood contracts were signed in whose blood, they managed to get the principal cast to voice their own characters. Imagine my surprise when, impressed by the accuracy of whoever was doing an impression of Han Solo, I discovered that notorious grumpy carpenter and owner of magical oranges Harrison Ford had actually voiced himself.

So far, so Star Wars, but in terms of the actual mechanics of the game there are still those grates that only small characters can fit under, still those rope lassos, still those climbing points that need a character with some species of stick. There are the same collectible items to find, the same terrifyingly large roster of minifigures to unlock. Luckily it’s also kept the tradition of working in weird jokes, even if it kept everything else as well, and there are some genuinely funny bits resulting from it. Kylo Ren’s bedroom is revealed to be that of a teenage boy having a fan freakout over Darth Vader, a Stormtrooper congratulates her peer for setting a new base record at target practise with 3/10 hits, and Rey’s land speeder has a ‘BB on board’ sticker. There is, of course, the usual nonsense with errant bananas and broomsticks that you expect from one of these games as well.

It’ll all feel very familiar if you’ve played a Lego game recently, and although there are some new additions to spice it up, they don’t always work. There are boss fights to round off some areas, but half of them boil down to quicktime events with non-specific triggers and are as tedious as watching the Star Wars prequels. In some arenas the cover shooting segments really work, but in others they become janky speed bumps in the middle of an otherwise well-paced level. It’s frustrating when all it would take to fix is a small change in the layout of the level.

This kind of ‘this could be great if only…’ conflict comes up more than you’d hope. The flying sections are fun, but the ship controls like Poe Dameron is swiping wildly through Tinder with one hand. Two-player works well, but the AI in single-player, trying to help you as best it can, can populate your selection wheel with two BB-8’s or four different iterations of Rey, and while they may be people’s’ favourite part of The Force Awakens film it’s unsettling. One can’t help but imagine them having an existential crisis on a tiny, Danish-made scale.

Lego TFA is good if you like anything Star Wars, it’s good if you want something kids can play too, and it’s good if you just bloody love these Lego games; if you’re the intersecting point on the Venn diagram of all three then it’s probably your game of the year. For the rest of us it’s polished, good looking, and pretty well designed, but ultimately a toy that’s becoming formulaic and a lot of us are probably tired with by now. If only there were a consumer product it was easy to compare it to.

It captures the spirit of Star Wars, but will feel very familiar if you've played a Lego game recently
7 Great adaptation and expansion of the film Open areas are especially fun to explore The Lego games are sadly formulaic at this point Even the added mechanics don't work that well