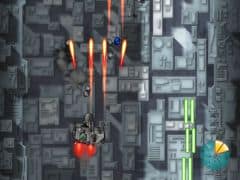 If someone can tell me the point of Lego Star Wars: Microfighters I’d really appreciate it because I tell you… I don’t get it.

Lego games have always been somewhat simple, aimed at a younger or family audience, mostly, in order to cater for a relaxed, light-hearted experience. Yes, there are older individuals who get a kick out of them, too, be it for the license or an obsession with collectables. I’m pretty confident, though, that no one plays them to have their ass kicked. Even if you tried, it’s just not possible.

With that in mind, why has someone made a Lego title in the mould of a shoot-’em-up? Admittedly the idea behind it is to recreate some of Star Wars’ biggest battles and put you in control of them, but I bet my ass they weren’t this dull. If they were, Wes Antilles would’ve quit within weeks of getting the gig. He’d be a chef now… or something.

Regardless of what’s in the background – and Microfighters will take you through both the original trilogy and prequels – all you’re asked to do is move a ship around by touching your finger to the screen. Weapons will activate automatically, leaving you to just navigate your way through the oncoming enemies.

It all handles as you’d expect – although it has a tendency to be finickety and difficult when trying to manoeuvre precisely – and being in the Lego mould tries to give as much leeway as possible (in this instance you can ‘lose’ and have to start a level again, mind). However, it’s all so boring. The colour palette and vehicles you’re hoisted in may change, but it’s always a case of wash, rinse, repeat. The appeal of any game within this genre, surely, is the challenge, so why would you play this?

‘Because I love Star Wars’, you say. Okay. That makes sense. But do you also love being criminally unentertained? If so, then ignore everything I’ve said. We’ve found the game for you…

Lego Star Wars: Microfighters is a very boring iOS game. That's all there is to it...
4 Star Wars, innit. Never changes. Really quite dull. No challenge means no reason to keep playing.

Choose to fly for the Rebellion and Galactic Republic, or turn to…

Choose to fly for the Rebellion and Galactic Republic, or turn to…