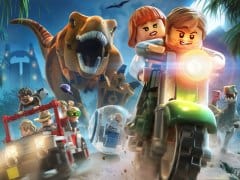 I’m torn. There are parts of LEGO Jurassic World that work incredibly well. Some of the movie quartet’s most iconic scenes are combined with clever one-liners and visual gags, but these moments are often outside of gameplay. The game itself is a less combat-heavy version of the same stuff we’ve been playing for years, this time with fewer characters of note and a less than thrilling open world to explore once you’re done with the story missions. It’s a bit like how I feel about the Jurassic Park movies as a whole. I really like some of them, but the rest is one big pile of shit (well, not quite, but otherwise the joke doesn’t work).

Although titled to make use of the hype train around the new film, all four movies are recreated here, each offering around three hours of gameplay. To begin with you’ll have access to Jurassic Park and Jurassic World, with Lost World and Jurassic Park 3 unlocking as you complete the previous film campaigns. You also get all the main locations from the four films to roam around, which is neat if you’re a big fan.

Jurassic World takes the tried and tested (and somewhat disappointing) approach to gameplay that practically every game in the franchise has used. You wander over to a highlighted area in the world and press the action button. The character will either perform the task triggered, or shrug and suggest you switch to another member of your party. You then switch characters, walk over to the highlighted area, and press the action button. It’s all so simple even Tim could handle it, and is definitely becoming rather dull.

Jurassic Park and Jurassic World (if you’ve seen the movie) are the pick of the bunch, mainly because they are the better films and as such have more memorable moments to relive – Jurassic World also seems to tell its story in more detail, which isn’t entirely surprising given it’s the focus of the package. The third film is easily the weakest of the games, with numerous bland environments that blend into one – even if there are often some cool dino fights going on. I won’t spoil how the best film scenes are recreated, but on the whole they are handled with a great sense of humour and also skirt around death to make the whole package extremely child friendly.

All four games feature escape sequences where you run away from rampaging dinos, nicely breaking up the fairly sedate pace of the normal missions, but most the time you’re bashing things and rebuilding them into something else, shooting targets, chopping vines, or lassoing hooks. The films aren’t really built around fighting, so naturally the dev team has focused on puzzles, but due to the nature of LEGO games these are more a case of doing a set of simple tasks in order. Kids might not care, but for adults looking to reminisce about those dinosaur movies they liked, it’s all a bit too formulaic.

Collecting everything after the credits have rolled is always a key part of any LEGO game, and it’s the same here, but I found the explorable islands and parks less enticing than doing similar in LEGO Batman 3. Part of the issue is the mundane tasks (such as the dino races through checkpoints) but also the fact that the majority of the characters you can unlock are people you probably won’t care about. I was apathetic towards almost the entire cast from Jurassic Park 3, so the many staff you can acquire feel like filler of the lowest order.

Playable dinos should be the saving grace, with loads of the prehistoric beasts unlockable. The only problem is that to get them you must find the corresponding piece of amber from within the game’s story missions. Once you have access you can use them to smash or burn objects that had previously been impenetrable by other characters. Fun to begin with, but soon the banality of the tasks hits home.

As much as parts of LEGO Jurassic World are very enjoyable and provide some gentle laughs, it’s hard not to feel, once again, that LEGO games are in need of a shake up. It can’t help that there are so many of them, and a slight roughness to Jurassic World in the form of hard crashes and dodgy audio (samples from the first three films all struggle to blend in) makes it seem a little rushed out the door. Having a licensed Jurassic Park game be this good yet also so disappointing is strange. Sadly TT Games, after some consideration, I’ve decided, not to endorse your park.