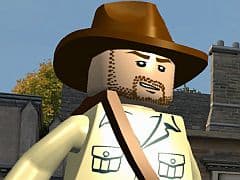 It’s another Lego game! Wooo! That isn’t the reaction I had when we received Lego Indiana Jones 2: The Adventure Continues in the office. With the numerous Star Wars games, the Batman game, Lego Rock Band and the previous Indy title, it does feel like we’ve already had our fix. Yet, they keep on coming and will probably continue to until people stop buying them. On the face of it Lego Indy 2 feels like more of a cash-in than the rest, with only one new movie to work from, but there’s more here than you might think.

Importantly, none of the levels found in the new Lego versions of the original films are the same as those in the first game. This means that there is a reason to play through them again, although the storytelling feels like it’s suffered as a result. Unless you’ve seen Raiders, Temple of Doom and Last Crusade you’ll have no chance of understanding what’s going on, especially as the Lego games always take slight liberties with the plot anyway. These three episodes are also short, leaving the bulk of the action to the recreated love it or hate it Kingdom of the Crystal Skull, which gets three chapters to itself.

Much of the gameplay remains more or less as it was in the original, with plenty of smashing up Lego bricks, building things to progress past obstacles, riding in vehicles, and working together with a partner (AI or human controlled) to solve simple puzzles. New here is the ability for Indy to freely aim his whip, but it’s not really anything that drastically changes the feel of the gameplay. Your whip is used a lot to tackle boss characters and reach objects you can’t normally access, but most of the time you’ll be smashing enemies into bricks using brute force.

There’s nothing wrong with the simple action on offer here, but it’ll be hard for most people to get as excited as they did when playing through the first three movies in the original game. Crystal Skull just doesn’t have the same appeal, nowhere near as many memorable moments and no nostalgic value whatsoever. The development team has still crammed in as many funny moments as possible, but it simply doesn’t feel as entertaining when the source material isn’t so well loved and iconic. Kids who loved the most recent movie are likely to see things in a different light though, with the focus on a more familiar film being exactly what they’re after.

Each of original three movies and the three chapters of Crystal Skull also get their own hub level, replacing the single hub area found in the previous Lego Indy game. These levels are much larger than before, and each offers plenty to do, see and collect. Previous Lego games let you access bonus levels by replaying completed sections of the game with new characters, but this mechanic has been dropped here. Bonus stages are now accessed through the new hubs, meaning there’s less of a reason to replay previously completed levels. Some may find this to be a disappointment, but the new hubs are massive and add a lot of game time to the package.

Playing with a friend on a single system returns, and it’s been improved to make for a less restrictive experience. Move away from one another and the screen will split in half, as it would in a standard split-screen two-player mode, so you can wander much farther than you previously could. The split also shows the direction your partner has headed off in, so it’s easy to get back together once you’re done exploring.

Lego games have never had the most stunning visuals, but Lego Indy 2 has a certain charm to it. The PC and next-gen versions all look a bit shinier and have some decent depth of field effects, but even the Wii game benefits from the generally blocky art style that doesn’t rely on well modelled, detailed objects. The Wii version also has some waggle controls here and there, but it’s pretty minor stuff and adds little to the game over simply using normal controller buttons.

One of the more exciting aspects of Lego Indy 2 is the creation tool. All the objects and blocks used throughout the game’s level are included, and by wandering around you can build levels as if you were a Lego brick layer. Triggered devices and switches can be created, and it’s all built on top of those sheets of Lego flooring that people of a certain age will be familiar with – my main memory comes from the massive board of the stuff at my local doctors’ surgery. You can create some pretty cool stuff, but – and here’s the big but – you can’t share anything you create. It’s a massive disappointment and lessens the value of the tool considerably.

Lego Indiana Jones 2: The Adventure Continues was always going to feel a bit desperate, making the most out of a small amount of new content, but Traveller’s Tales has done a decent job. There’s nothing repeated here from the previous game, but the versions of the original trilogy are confusing and the Crystal Skull will appeal mainly to younger gamers and not nostalgic old-timers. So while it’s not quite up there with the best in the Lego series, The Adventure Continues is still a fun romp, especially if you plan to play with some younger family members.

While it's not quite up there with the best in the Lego series, The Adventure Continues is still a fun romp, especially if you plan to play with some younger family members.
7 Classic Lego action gameplay Improved two-player mode New film is an acquired taste Can't share created levels