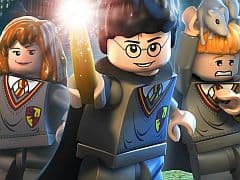 We had a bit of a discussion here in the office just a few days ago: what other games could translate well into a Lego title? Lego Call of Duty? Lego Twilight? How about a Lego fitness game… OK, I’ll be quiet now – developers could be listening. Either way I imagine that over in Warner Bros. HQ there is a big list, surrounded by dollar symbols, with every future Lego title that can and will be made. The next one to be struck off is Lego Harry Potter: Years 1-4, a magical universe loved by children and adults alike, and as we have come to expect from the Lego series, it’s seriously good fun.

Years 1-4, eh? Sequel confirmed, then. Here we follow the story of the world’s favourite young wizard and his friends, through their first four years in Hogwarts School of Witchcraft and Wizardry. It’s obvious to any Harry Potter fan that the foundations of the game are rooted in the films rather than the books – there’s no appearance from Peeves the Poltergeist, and the unnecessary moving staircases are ever-present. But in terms of capturing the magic (excuse me!) of Harry Potter, developer Traveller’s Tales has nailed it.

As with previous entries in the Lego series, the meat of the story is told through a number of short, light-hearted cutscenes. Again, all voice acting is conducted with grunts and nonsensical gibberish, but the often hilarious interpretations of these iconic moments mean that you generally get the idea of what’s going on, and what to do next. One part that particularly tickles me is the moment when Harry and Hagrid walk into Gringotts bank for the first time so that Harry can withdraw some wizard money. They approach the desk of a menacing-looking goblin knuckled down in his paperwork, and present Harry’s bank key (complete with a little Lego Harry Potter keychain). The goblin goes back to his work, obviously eager to finish it before he goes to help. As the camera pans behind him, he steps out of the way to reveal a child-like crayon drawing of a house, stick-people and an enormous yellow sun.

It’s this kind of inoffensive humour that really speaks to me; just a light touch of funny without taking anything away from the story being told. You can expect to see one of these pre-rendered shorts every 15 minutes or so, neatly wrapping up the key plot points so you can get on with being a wizard, or rather a wizard in training. In order to learn Harry’s full arsenal of spells you’ll need to attend all of the necessary lessons. These take the form of short demonstrations followed by a simple challenge to use the new technique, after which it will be added to the spell wheel on your HUD.

Potion-making becomes a game in itself as you hunt down the three separate ingredients for your recipe, usually requiring you to move, build, or demolish objects before the necessary items are revealed. Gradually more and more of Hogwarts School will be opened up as you unlock the skills, charms, potions and characters required to negotiate the variety of obstacles in your way. There are layers of gameplay here; series of micro-tasks make up the pieces to larger puzzles, which in turn are the building blocks of the grand design. The school is massive once it opens up, so it’s a neat way of easing you into your life as a wizard without dropping you straight in the deep end.

As with previous Lego titles the fun isn’t limited to the story. Collectables are found everywhere, awarded for tasks like magically turning on all the lamps in a room, rescuing a student in peril, or simply finding all the missing Lego pieces from a broken object. Rewards come in the shape of Hogwarts crest pieces and gold bricks, and since there are a great many of both (more than 200, in the case of the bricks), completionists may find themselves in some kind of magical heaven here. Even more so than previous titles, just about everything detonates into a shower of gold and silver studs when hit with a well-aimed attack spell. You will often find yourself forgetting about the task at hand in favour of simply bulldozing through the level, sending hexes in every direction, just to collect as many of the pick-ups as possible. Collect enough studs to match a level’s requirements, a number often in the hundreds of thousands, and you will be awarded True Wizard status, complete with another gold brick – phew!

Sadly, I’m one such sucker that isn’t satisfied until I have checked every last corner of a level for collectables (it’s a curse, I know). Thankfully there will always be one of the Hogwarts ghosts patrolling the school’s corridors, heading in the direction of your next objective. As an added bonus, these characters drop special ghost studs that rack up for extra achievements. So if you want to just get on with the story, or your memory of what happens next in the book is a little hazy, these supernatural citizens become more than a little useful.

You’ll usually play as Harry, with the likes of Hermione, Ron, Hagrid and even Madame Pomfrey available to switch over to at the touch of a button, depending on the party. The various characters carry unique items and abilities, such as Harry’s invisibility cloak, or Ron’s pet rat, Scabbers, who can negotiate small tunnels to collect objects and unlock sealed entrances. At the very least it encourages you to use someone other than Harry each time, and it’s always amusing to see how the different students react to given situations: Hermione, for example, can barely stay on a broom as it bucks and turns in an attempt to boot her off, while Harry is naturally something of a pro. Don’t be surprised when you get to the end of the game and find that you’re only around 50 per cent complete. If you really want to find every last item then you’ll need to replay levels in Free Play mode, using the unique talents of the unlockable characters to reach previously inaccessible areas.

Upon completing each level you are given the option to continue straight on with the story or to head back to the Leaky Cauldron, with access to the famous Diagon Alley. Here you can spend your studs on bonus material such as new spells and characters. I personally recommend purchasing the big head hex and then firing it at your friends, resulting in their ballooned bonces hitting the ground, temporarily anchoring them to the spot.

It’s things like the big head hex that make the two player co-op mode so much fun. It’s a tried and tested element of the series, something that any Lego game would feel incomplete without, and perfect for the Harry Potter universe. Many of the collectables require a bit of teamwork, perhaps with one person on a floating platform while the other charms it to move around the level. In short, it’s nothing that we haven’t seen before in the Lego titles, but it remains a vital part of the gameplay. If you have the opportunity of playing with a Potter-savvy friend, you should absolutely take it – this is an experience that needs to be shared.

Sadly, the slightly bizarre split-screen format returns from the more recent Lego games. Here the screen’s dividing line rotates to accommodate you and your friend, depending on where you both are within a level. While the constant shifting is rather jarring at first you will find yourself warming to it, but it would be nice to have the option to switch it off, requiring you and your buddy to stick together – that’s what friends do, right? Regardless, this is the kind of co-op game that will have you forever shouting and laughing with your mates as you help one another out, or screw each other with bulbous heads and trip jinxes.

Everything is a challenge, everything does something, and there’s never a moment when you can’t interact with the world around you in some way. Objects will come crashing down as you freeze and shatter troublesome Doxies, opening up yet more tasks for you to complete. Jumping on a sofa might spit out a student stuck inside it, or perhaps reveal a character stud, unlocking another of the 160 playable students, teachers, Death Eaters and much more. Not only has Harry Potter and Hogwarts School been perfectly captured and recreated in Lego form, but four entire novels of adventure are contained within its walls. It’s been boiled down to a potent, magical concentrate – one that will entrance children and adults alike. Lego Harry Potter: Years 1-4 proudly lifts the trophy as the best in the Lego series… until you smash it for more precious studs, that is.

Not only has Harry Potter and Hogwarts School been perfectly captured and recreated in Lego form, but four entire novels of adventure are contained within its walls.
8 Hilarious cutscenes Brilliant fun in co-op Tons and tons to collect Story can be hard to follow