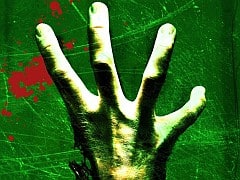 It’s amazing how quickly a situation that’s completely under control can elevate into one that will cause even the most veteran FPS gamers to panic. In Valve’s first-person shooter co-op survival horror it only takes a split second, a slight lapse in concentration, and your four-man team is on the end of a zombie nightmare. I’ve never played a game that requires such a reliance on your fellow gamers, with your life more often than not in their hands. Left 4 Dead isn’t just a great survival horror game; it’s the best example of cooperative gaming you’re going to find anywhere.

L4D isn’t complicated. There’s been an outbreak of a virus that turns humans into zombie-like crazed killers (very 28 Days Later) and you must battle to survive long enough to get rescued. Presented as four separate movies, each with the same cast of four characters, you essentially get 90 minute to two-hour chunks of gameplay, each throwing thousands of infected at you, arming you with a small set of weapons and is never the same twice – while the level layouts remain the same, something Valve has named the Director decides what infected to unleash, from where and in what numbers. A corridor of tranquillity in one game may well be the most hellish moment of your gaming life the next time you play.

Each of the four movies is split into zones, with the goal being to reach a safe room that acts as both a checkpoint and way to stock up on ammo, change your weapon and grab some health packs. Health packs in L4D are scarce, with your character only able to carry one at a time, along with a temporary booster in the form of pain killers. The odd health pack can be found throughout each level, but you can go for a long time without seeing any at all. The lack of replenishing health, which has become the norm in modern first-person shooters, is a key design decision, making every health pack count – and who to use them on something that needs to be discussed.

You’re able to use your own health pack to heal yourself or a team mate (downed team mates can also be given a temporary 30 per cent health boost if revived from an immobile state without using a health pack), which is something that isn’t quite as clean cut as it might seem. During my time playing cooperatively in the office the decision was always fairly simple. If one of us was near death and without a health pack their health become a priority, with one of the group administering a health pack. When playing with randoms online this decision making often factored in other things. During one online game, student Zoey (accompanied by loud mouth Francis, systems analyst Louis and Vietnam vet Bill) wasn’t doing her bit for the team, so when she called out for help (in a rather manly voice), having fallen foul of a vicious attack, my two other survivors demanded that I leave her there to bleed out, for fear that I’d take too much of a hit if a rescue was attempted.

I felt conflicted, but they were right. Zoey had been holding us back since the beginning and we only had to survive another five minutes until the boat arrived to take us to safety. My health could be vital in our survival, so I agreed and left her lying on the ground floor of the house we’d found ourselves in, helplessly shooting while immobile on her back. There’s absolutely no question that L4D is more fun when played with friends, but playing with randoms online will throw up unique situations that make it a very different experience. Even playing with one or two AI characters changes things considerably, with their will to heal others even when on the brink of death themselves often reaching Samaritan levels of kindness.

A horde of crazed infected would have made for a fun, hugely enjoyable experience, but it’s the special enemies that raise L4D to another level. They’ve been designed with the express purpose of forcing the team to work together, helping one another out. You could survive an attack from standard infected without too much trouble, but these special enemies can completely immobilise you until a friend steps in to help you out.

The Hunter, a leaping enemy that pins you down and repeatedly smashes your skull in, can only be taken down by one of your team mates once it has you. Smokers grab you round the neck with a long disgusting tongue that drags you to its location while strangling you. The effect is sudden and shocking, and unless you shoot them instantly you’re helpless, left to shout out for help and hope your team mates spot your location (which the game does a good job with, thanks to a handy colour coding system and outlines that can be seen through walls). The Tank is a massive beast that appears to have a steroid abuse problem, able to smash you clean off your feet. Taking it down without too much incident requires a team effort. The Boomer, a fat, bile-filled nasty, acts as a as laser targeting system for the infected horde. If it manages to mark you (charmingly done by puking all over you and smearing your vision with green goop), there’ll be a sudden scream of: “It got me!”, or most likely something far less family friendly. As soon as you hear one it’s essential you pinpoint it and take it own before it has a chance to do its business, or you’ll be on the end of a sudden torrent of infected coming from everywhere.

Perhaps the best enemy and the one you should be most fearful of is the Witch. This innocent looking crying girl will send chills down your spine when you hear her, and the accompanying soundtrack does little to help. She hates light, so it’s vital you don’t spook her with your flash lights, and it’s best to sneak around her if possible. Don’t do what we did on one occasion, and try to be smart with fire. Having spotted her we thought we’d throw a Molotov on her then all pummel as many bullets as possible into her. Bad idea. It seems being set on fire isn’t something she enjoys, so she proceeded to go absolutely mental, running around and unleashing fiery hell on us all. It’s a moment I won’t forget in a long time.

Valve’s Director means that you can’t approach a level knowing what’s coming. Whereas in lots of shooters you can learn what works best in each fire-fight, in L4D you have to react on the fly, using whatever buildings you can to take shelter and hoping you’ve got the weapons best suited for the job (we found the assault rifle to be a good all-rounder, but the uzi, shotgun and hunting rifle all do well in the right hands, and the pistol is a good secondary weapon especially when doubled up). Your character can also carry one explosive weapon, with the Molotov cocktail and pipe bomb each proving to be great weapons in the right situation. The pipe bomb attracts the brain dead enemies to it before exploding in a shower of blood, but be careful to watch out for flaming infected if any survive a Molotov attack.

The co-op mode is really only half of what L4D has to offer. There’s also a versus mode, in which one team play the four survivors, while another four players take on roles as the four most lively special monsters (Hunter, Tank, Boomer and Smoker). With the Director still calling the shots with regard to what it spawns and real people controlling the other nasties, it’s a game like nothing you’ll have played before. There’s an almost sadistic pleasure from sneaking up behind a group of players as a Boomer and puking over them, then retreating and watching as your team mates attempt to pin down other survivors at the most opportune moment. Although not all the co-op campaign maps are available in versus, hopefully more will be released over the coming months – along with new movies to play through too.

Built using an enhanced version of Valve’s Source Engine, L4D looks good, but isn’t quite up to the standard seen in other high profile shooters released this year – although the PC version can look considerably prettier than the Xbox 360 version when running on a high end PC. Although it lacks the sheer beauty of something like Gears of War 2, it more than makes up for it by throwing an obscene amount of enemies at you and is full of the usual Valve attention to detail – scribbled writing on the wall being a particular highlight. For the most part it runs well too, with the frame rate only dropping during the most crowded scenes that also happen to have a raging fire in shot.

There are games you want everyone to play, just so they can experience what you’ve such a good time with, and Left 4 Dead is one of them. It’s unlike any other game I’ve ever played and demonstrates the true power of cooperative gameplay. It’s worth noting that the experience is somewhat dulled if played alone, but if you’ve got online friends or are happy to play with randoms, Left 4 Dead is a game you simply can’t pass up. Just make sure you’ve worked out what you’d do in a zombie outbreak before you start playing, as you won’t be able to make anything approaching a sane decision with a screaming witch bearing down on you.

There are games you want everyone to play, just so they can experience what you've such a good time with, and Left 4 Dead is one of them. It's unlike any other game we've ever played.
9 Brilliantly playable Co-op works superbly Many different experiences Not all levels are playable in versus