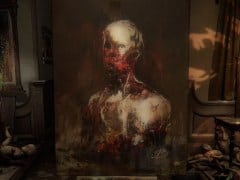 Layers of Fear is a haunted house ride for the modern era. While travelling fairs have to make do with little carts, smoke, mirrors, dodgy props and spooky music, video games can be a whole lot smarter with their scares. While this effort from Bloober Team doesn’t really take the creepy horror genre anywhere new, it hits the right notes with accomplished frequency and offers a heart-pounding (my heart was pounding. I felt it. This isn’t just some lazy PR speak I’ve included because I can’t be bothered to think of anything better) experience.

Cast as a disturbed painter (not exactly horror 101, but stick with me), you roam around an often dimly-lit house in the 19th century. As you might be expecting, things aren’t quite normal, and strange events start to occur. Will you find out why the protagonist is slowly losing his mind over a painting? Why are there so many weird dolls all over the place? Is this just a P.T. knock off?

Chances are you will find out answers to these questions as Layers of Fear isn’t a difficult game to get through in a gamey sense. Other than the odd slight puzzle (I did get stuck on one but managed to brute force the answer without too much trouble) there’s no challenge here other than overcoming the terror; a terror that is pretty substantial. This is a bad place, that much is certain. A very bad place indeed.

Bloober has created a game that not only features plenty of unnerving imagery and audio, but plays around with the world brilliantly to make sure you’re never at ease. Rooms completely change, doors disappear, floors collapse, and more messed up mind-bending nonsense occurs in the name of freaking you out. It feels smart and it’s tied into the gameplay at points in effective ways, helping elevate the whole experience above simple P.T. clone fodder.

In short, Layers of Fear is a game that will fuck you up if you get scared by things. I don’t jump up and down screaming like a baby every time a ghostly figure appears in a corridor, but I felt plenty on edge throughout large parts of the game’s 4-5 hour running time.

Somewhat aping the style seen in the ill fated P.T. from Kojima, Layers of Fear goes for a realistic style and for the most part pulls this off with aplomb. It’s not quite as shiny as P.T. but the lighting is great and used to create a wonderful, eerie atmosphere. What isn’t great, at all, is the frame rate. Tested on PS4 (but also apparent in the Xbox One build played last year), from the moment you first move the camera, things stutter.

As the game currently stands it’s one of the worst performing PS4 titles I’ve played, which is a real shame. The dev team certainly aimed high, but with performance this bad you should be aware before going in. This isn’t a game that runs mostly at 30fps with occasional drops, it’s a game that frequently chugs, occasionally dropping to completely unacceptable levels.

The saving grace is that Layers of Fear isn’t a game that requires skill or reactions, and generally you wander about at a sedate pace, so the frame rate can be tolerated. Fingers crossed a performance update is released as there’s no doubt it hurts an otherwise impressive looking game.

Layers of Fear is a fun ride. If you can live with the poor frame rate you’ll find a horror game that relishes the chance to mess with your head, delivers plenty of scares, jumps and heart-pounding moments, and wraps it up in a bizarre yet intriguing storyline.

Layers of Fear is a fun ride. If you can live with the poor frame rate you'll find a horror game that relishes the chance to mess with your head.
7 Looks great Scary Smart design Frame rate is terrible