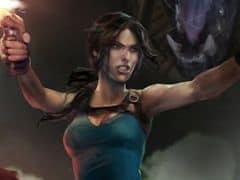 Lara Croft and the Temple of Osiris Review

Fan of Tomb Raider games where you actually raid tombs rather than perform shotgun facelifts on the population of Sweden? Then Temple of Osiris is for you. Don’t let the isometric angle put you off: LaCro and the ToO’s (as it will never be referred to again) presentation belies its ability to deliver the purest Lara Croft adventure in years.

Whereas Tomb Raider (the reboot) drew flack – and not a few fans – for its graphic depiction of ultra-violent survivalism, Osiris eschews the Bayhem and tiresome narrative pretensions for an experience more in line with classic adventure gaming. The setup is as basic as they come: Lara, along with fellow artefact hunter Carter, accidentally get sucked into the underworld after waking the Egyptian god Set. While there, the two team up with Horus and Isis to recover the scattered pieces of Egyptian god Osiris’ body so they can resurrect him, defeat Set, and go home.

Early impressions are underwhelming, seldom hinting at the potential the game soon realises. Jumping, of all things, feels a little loose, with each character sliding slightly each time they land and take a step, leading to unnecessary deaths even with a huge position indicator. Shooting, too, lacks both kick and either a compulsive scoring system (even if there is a multiplier, which affects overarching challenges) or engaging enemies to really get players going. There are only so many scarabs or skeletons you can kill.

Osiris succeeds, however, by combining weak or average individual elements into a package far stronger than the sum of its parts: one that rewards exploration, teamwork, and presents players with huge tombs to fight, swing, and climb through. Using a hub system, Croft and co. will pad around the overworld collecting gems (used to open loot chests), before entering various themed dungeons to collect yet more gems and try not to get viciously killed. Each of these require a large amount of physics-based problem solving (especially if working alone) or good teamwork to navigate out of.

The tombs themselves are each intricately built and detailed, furnished with both impressive micro details as well as imposing larger features (sheer drops, running waterfalls, gigantic sculptures, etc). It’s adept at creating a genuine sense of scale: the forced perspective seems limiting at first, but it does a superb job of rendering Croft and friends as small elements of a large world. This is especially true of the boss battles – always a highlight of any tomb, their outlandish nature combined with disproportional size make for intense encounters.

The environments are all as fantastical as each other, succeeding in their aim of making the player believe they’re actually on an adventure, as opposed to a safari. None of the places you’ll visit are particularly innovative, either aesthetically or mechanically – there are gigantic rotating platforms, collapsing walkways, arrow barrages to avoid, fire-spewing turrets, all that noise – but it works in selling, Indiana Jones style, the notion that you’re in the middle of something far larger than yourself, in both literal and figurative terms.

The puzzles – which outweigh the shooting by a large margin – are enjoyable enough when playing alone, but one of Osiris’ main selling points is that it supports multiple players, and concessions have been accordingly. If more than one participant is involved the powers that Lara wields when on her own are split between the group, and the levels adapted to fit. So, Horus or Isis will use the staff that controls certain mystical elements of the world, while Lara or Carter retain more physical attributes, like grappling hooks. (Both use guns, because guns.)

Either way it’s a lot of fun, requiring a mix of logical thinking and physical dexterity that’s been missing from the main series. The only real gripe is that sometimes it’s possible to miss some of the puzzle signposting which, coupled with the fact you can solve some of the more physics-based head-scratchers in ways I presume the developers hadn’t intended. (An example – when navigating a series of spinning wheels it’s possible to use the game’s collision to jump on each and not actually have to ‘solve’ the other part, which is raising platforms in between.)

There’s also the slight issue that, should you have played the game in single-player and then invited other players in, Temple of Osiris isn’t great at flagging up your new and diverse abilities. Neither of these are huge concerns, especially not compared to the experience as a whole. Those who found themselves a little burned out by nu-Tomb Raider’s overwrought theatrics will embrace Temple of Osiris with open arms, and everyone who enjoys a good, old-fashioned adventure should take a look.

Every time you enter a tomb your main goal is to recover a piece of Osiris (who has been rended into parts by Set so he cannot come back to life), but there are also mini-challenges to beat as you traverse each stage. One is usually besting a set time limit; other common goals include achieving three different score levels. Then there are specific trials: run between the legs of a boss, for example, or kill three enemies with a single bomb.

Temple of Osiris is already fairly big for what it is – clocking in at around the five-six hour mark – but the challenges ensure you’ll have something to come back to. Completing them gifts rewards in the form of weapons or combat buffs: bullets that fire in spreads, rounds that set ablaze as they take flight, explosives with extra damage radius, etc. Like the game as a whole, it’s nothing new, but it is implemented very well, complementing the rest of the experience. The tombs themselves would be good enough to carry the game without challenges, but they add an extra layer of difficulty for completionists. If nothing else it should make for some exceptional Twitch runs.