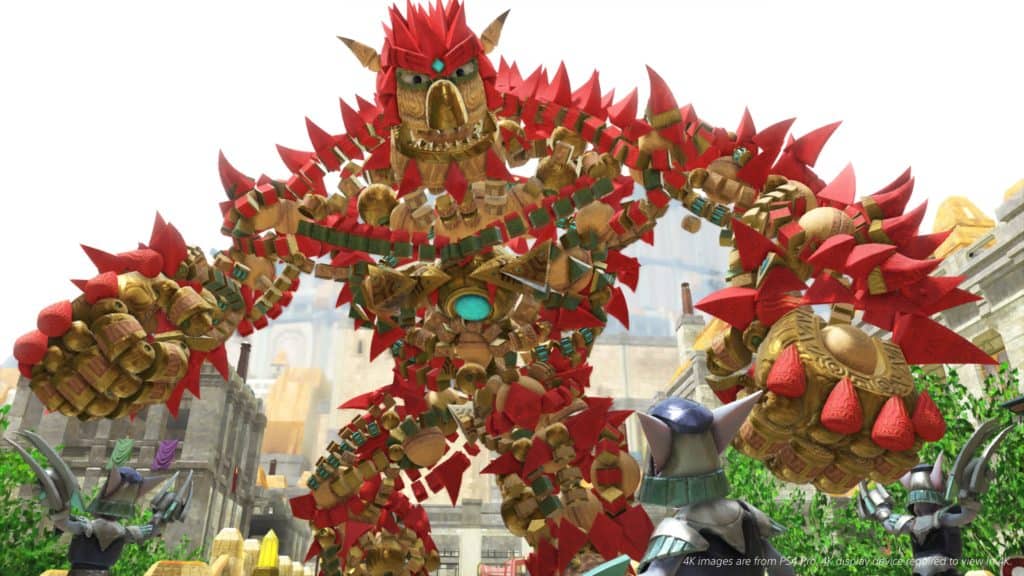 Much like Knack, I’m not entirely sure who Knack 2 is for. It looks like a kids TV show — one of the ones with high production values That Adults Can Enjoy Too! like Guillermo del Toro’s Trollhunters on Netflix — but I still suspect that neither demographic is going to entirely enjoy it, which is exactly the issue the first Knack game had.

Knack, if you weren’t aware, is the name of the game and the character you play as. Knack is a collection of Relics, which are old, magical carved rocks in various different shapes, all floating around a central circular one to form the shape of a humanoid monster… thing. Knack is quite pointy. The more Relics Knack is made of, the larger he is, which also increases his hit points and strength.

This remains true in Knack 2. You can switch between big Knack and teeny Knack at the push of a button, shedding Relics on the ground around you, but your upper limit depends on how many Relics you manage to find in the level. Because being a giant Knack who lays waste to everything before him makes the game too easy, it only allows you to become 30ft plus every so often.

In his first adventure, Knack was fighting against goblins, who were waging war against humans. Knack was created by a human, so he’s on their side. For Knack 2, those goshdarn goblins are at it again, this time powering up war robots left lying dormant on centuries old battlefields (because goblins and humans fighting one another goes way back). So Knack, his best mate Lucas, and Lucas’ Indiana-Jones-adjacent uncle Ryder — who has, by the way, been harassing his ex girlfriend to the extent that she created robots with laser swords to keep him away — must platform their way to saving humanity once again.

It does look more polished than Knack, of course. The colours are brighter, the textures more detailed, and the physics on Knack’s constituent parts is better. It has a jump-in jump-out co-op system, where Knack duplicates himself into a blue Knack for player two. It’s easier, which is good because the first one was weirdly very difficult. It’s got better checkpointing, and Knack has more moves, apparently having realised that he has legs he can use to hit enemies with now as well.

But then other things have been shuffled around to become baffling. Knack has a skill tree where you can buy new moves for him, but its four sections can only be opened up one at a time, and after you’ve fully levelled the previous part of it, and none of the abilities upgrades seem to particularly match the section they’re put under. The new abilities come with new controls, but they can be ridiculously unintuitive: square is punch and circle is kick, unless you want to do a heavy punch, in which case you need to hold the kick button down.

Environments and enemies may be more lush and spectacular, but they also look very uniform. From city to mountain, desert to jungle, you get the nagging feeling that they’ve all been clicked together with pieces from the same box of Playmobil, which then contributes to an already too long game feeling interminably so.

The platforming is at least very well done, especially in the sections calling for you to shrink Knack down or leave piles of relics in different places, and the different abilities Knack gains when incorporating metal, ice, or stealth crystals are still fun enough. It’s a decent mix of moving hazards that makes you feel good for getting your timing right, and Knack’s jump isn’t annoyingly floaty. Neither is the fixed camera an issue, although it takes some getting used to. You’ll never miss a secret or fail an area because the camera wedged itself behind a tree. There’s also a smattering of QTEs; not so many that they get annoying, but enough that Knack punching stuff in slow motion is pretty cool. Then suddenly you have to a vehicle section, or do some actual sneaking and hide from enemies looking for you, with no real explanation, and it feels a bit weird and abrupt.

It’s a kid’s game that’s not fun enough for a kid, and doesn’t have any slightly grown up jokes that pantomimes and Pixar films throw in as a nod to the parents. I still have no idea who this game is for, although if you have a child you’d probably enjoy playing through it together by dint of (hopefully) enjoying spending time with them. The thing I found most interesting was the discovery of a goblin city, at which point I, as a giant, terrorising Knack, had to smash my way through actual suburbs and market places, as citizens looked on and/or threw stones, and the game might not even have been making that point intentionally.

Knack 2 doesn’t have exactly the same problems as Knack, it’s just moved things into different places and ended up mostly the same. Which is at least emblematic of Knack himself, I suppose.

Knack 2 doesn't have exactly the same problems as Knack, it's just moved things into different places and ended up mostly the same. Which is at least emblematic of Knack himself, I suppose.
5 Good platforming Updated visuals Bizarre control choices Long and repetitive 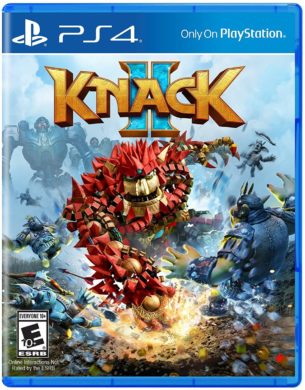