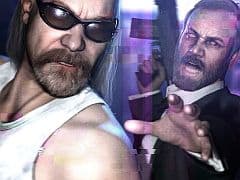 You’re running starkers through a city, your skin cut to pieces, a gun in your hand. Your buddy is also naked and bleeding from numerous wounds all over his body. This is the crazy life of Kane and Lynch, gaming’s most unlikable leading men; psychos who just can’t stay out of trouble. With the original game failing to be a critical success, developer IO Interactive’s sequel has a lot to prove. Are these guys simply blood-thirsty killers or is there more to them?

Without spoiling the plot of this sequel too much, Kane and Lynch bodge a job, resulting in the death of someone with connections to a huge criminal organisation in Shanghai. With an army of goons out for blood what follows is an often unpleasant tale of revenge, torture, murder and the ramblings of a psycho and his mate. This time around you play as Lynch, although the slightly less unhinged, but still more or less a psycho, Kane is always at your side.

Dog Days is, at its core, a fairly simplistic cover-based third-person shooter. You can now hide behind objects by pressing a button, rather than the awkward auto cover system the original game employed, and the controls feel tighter too. Environments this time around have been designed to allow for better use of these basic mechanics; you’re never far from a handy waist-high crate or wall to take shelter behind, but be careful, as some cover will be ripped apart by enemy gun-fire.

With enemies dropping guns and ammo all over the place, and a plentiful supply of explosive canisters and crates, you’re never short of ways to dispose of foes. As is often the way, the shotgun (in various forms) was my weapon of choice, but the sniper rifle and various automatic weapons came in very useful too. At one point you even get to man a gun turret inside an army helicopter, in what is one of the game’s most action packed sequences.

The duo’s fairly brief murderous adventure is unquestionably full of intense shoot-outs, but memorable moments are few and far between. The naked scene alluded to at the start doesn’t deliver anything new in terms of gameplay, but the events were shocking enough to make me feel a bit uneasy. Equally, a level set inside an office block under attack from a gunship is full of things being shot to pieces, but it still somehow lacks spectacle.

Dingy levels merge into one rather depressing whole, with the various Shanghai environments doing little to sell the Chinese city as a hot tourist destination. This if of course exactly what IO wanted to achieve with Dog Days’ visuals. Combined with an excellent shaky cam and internet video-style pixelation, no other game has ever looked so deliberately miserable while simultaneously being Michael Mann cool.

Audio work is equally impressive, with the excellent voice acting paired superbly with ambient sounds from the city. Fire fights send bullets ricocheting through your surround sound speakers, while our heroes constantly bicker with each other. The lip synching could certainly have been better, but on the whole the performances of each virtual actor make a basic story very entertaining, and one you’ll want to see through to its conclusion.

Sadly very little is made of main protagonist Lynch’s mental state. He’s almost always shouting something that only an unhinged man would, but his unique characteristics don’t translate into the gameplay. He appears to be gradually slipping more and more into an un-medicated, dangerous condition, but you wouldn’t know if not for the one-liners and his actions in cutscenes.

A rather unsatisfactory ending to the psychotic double act’s ordeal sours things somewhat. I was left expecting the pair to return to the screen after the closing credits, but there was nothing of the sort. There’s no question that the door has been left open for a sequel, but that could have been done in a more satisfactory manner.

Co-op play, via split-screen or online, adds in an element of working together, but the only differences are enhanced flanking abilities and being able to revive your buddy if he’s downed by enemy fire. Split-screen is also vastly inferior to online co-op, with the reduced viewing area seriously impacting the visibility of enemies.

The campaign feels a few hours short, but you do get a very decent multiplayer component, with game modes that test your skill with weapons as much as they do your morals. Stabbing people in the back for the riches is the idea, but it’s not nearly as straightforward as you might think. I’ve only been able to test out the multiplayer through the solo Arcade mode and briefly against other people online, but the three game types on offer deliver some incredibly tense bouts of loyalty and backstabbing. Fragile Alliance, returning from the original game, is still the best mode, making players tread a fine line between being a complete git and a goody two shoes.

Another mode sees one player taking on the role of an undercover cop, trying to play as part of the team while sneakily taking out unsuspecting allies. It’s a neat variation on the Fragile Alliance game mode, and makes for some of the most paranoid gaming on the market. Finally there’s a more straight forward Cops Vs Robbers mode, which pits teams of six players against each other; the robbers must steal the loot, while the cops must defend it. Pretty simple stuff, but fun all the same. For more on the various game types, check out our multiplayer hands-on articles.

Kane & Lynch 2: Dog Days is one of the most visually unique titles I’ve ever played, glossing over a fairly by the numbers third-person shooter. The deranged duo’s return is worth experiencing and is far more accomplished than its predecessor, but the gameplay on offer still doesn’t match the quality of the characters IO has created.

The deranged duo's return is worth experiencing and is far more accomplished than its predecessor, but the gameplay on offer still doesn't match the quality of the characters IO has created.
7 Multiplayer still feels unique Stylish visuals Great audio Gameplay is fairly generic