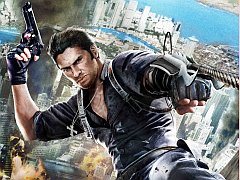 Sometimes the simplest things can bring about the most fun. Just Cause 2, while giving you a lengthy campaign of missions to play through, excels primarily because it gives you the tools required to have a good time – a rather explosive one at that. Avalanche’s open-world sequel is silly, doesn’t handle gunplay all that well and features the worst voice acting I’ve heard in a very long time, but once you learn the ins and outs of Just Cause 2’s grappling hook, it’s hard to stop messing about.

Don’t buy Just Cause 2 expecting the kind of involved story you found in GTA4. Playing once again as secret agent Rico Rodriguez, you’re sent to the islands of Panau to hunt down a rogue agent. That’s the basic plot, but soon things become much more than Rico had bargained for, so you’ll need the help of Panau’s factions if you’re going to survive against a trigger happy military regime.

Structurally the game is similar to Saints Row 2, in that story progression missions are only unlocked once you’ve completed a number of side-missions and racked up Chaos points. Chaos in Just Cause 2 is handed out for completing missions and for destroying government property, with the game informing you how close you are to unlocking the next mission every time your overall total is increased.

Completing faction missions not only rewards you with Chaos points, in turn getting you close to the next Agency story mission, but also widens that faction’s area of influence. These factions will provide you with support should you run into trouble, as long as their influence stretches into the area you’re fighting, so despite appearing as side missions they are essential for your safe passage throughout the game.

At times this system results in an island map completely devoid of missions, leaving only the cash-rewarding race events to take part in. As these don’t hand out Chaos points, you’re left to cause as much damage to government property as possible until you cross the required points threshold to unlock a new mission. It’s a tad tedious at times, but the wanton destruction is usually great fun. Just be aware that you won’t be able to focus purely on working through the story.

Mission structure then isn’t going to be ideal for everyone, but something that few will be disappointed with is the insane stunts Rico can perform. These are built around his ability to skydive, his parachute and grappling hook. Just Cause 2 isn’t a realistic game, and as such can get away with some insane moves. The thrill of skydiving out of a plane thousands of feet in the air, then ripping the pull chord on your parachute inches from the ground is just brilliant, while being able to tether yourself to all objects means you can traverse large distances with a neat grappling hook/parachute combo.

There’s always a normal way to climb up to the top floor of a building, but why bother when you can just grapple up the side? Why shoot an enemy when you could pull him from his perch with a click of a button using your grappling hook? Is a pursuing enemy vehicle causing you trouble? No problem. Just tether the Jeep to the road and watch it spiral into the air as if from a Hollywood action movie. Why not attach a solider to a gas cylinder and watch what happens when you pop a cap in the tube. These are just a fraction of the ways you can have fun with the tools in Just Cause 2, and the reason the game is so much fun.

Vehicles play their part too, with over a hundred ready to be hijacked in the game. These range from bikes and cars, sometimes manned with helpful faction solders, to boats, attack choppers and fighter jets. Not only are these a great way to get from point A to B, but also as a way to cause complete mayhem. While some vehicles aren’t equipped with weapons, get in one that has a gun turret or rocket launchers and you’re a death dealing machine. It’s not easy to remain unnoticed, though, so you’ll likely have a small army on your tail before too long.

Scattered around the game world are pick-ups, either giving you new weapons, cash or upgrades. These provide a worthwhile reason to explore, with the upgraded items more or less essential during the game’s trickier encounters. A Black Market trader can be called in at will, offering you weapons, vehicles and travel for a fee, although the rather sedate speed at which he arrives gets a little annoying. It’s worth thinking about what you’re buying too, as spending cash on a vehicle that’s going to get shot down moments later doesn’t make great financial sense.

Speaking of annoyances, the gunplay in Just Cause 2 isn’t great. It’s a lot better than that seen in the original game, but it still comes up short compared to the best third-person shooters. Guns feel bizarrely weightless, yet send enemies flying into the air on impact, while the standard aiming mode is far too floaty and imprecise. Vehicle handling, at least on the ground, is also somewhat disappointing, with cars in particular too willing to spin out of control. These issues don’t make Just Cause 2 a poor game, far from it, but do prevent it from being a truly excellent one.

These problems, along with the mediocre story and terrible voice acting, would cripple most games, but not Just Cause 2. It only takes another skydive and grapple into a helicopter moment, or a few minutes of jet fighter chaos to put a smile back on your face. Jumping into an aircraft to explore or to rain bullets down on enemy bases never loses its appeal, and thankfully you’re never far from what you want. It’s also worth commending Avalanche for putting together story missions that aren’t just glorified fetch quests. There’s real variety here, not only in mission objectives but in the locations, with Panau offering dense jungle, tropical waters, snow covered mountains and vast open deserts.

It all looks amazing too. It’s the sheer size of the world and the draw distance that makes Just Cause 2 so special to look at. Soaring through the sky in a helicopter as you make your way over a sun-soaked mountain top, only to see a vast expanse of land stretch out in front of you is just an incredible sight. On the ground things look brilliant, too, but character models aren’t the best we’ve ever seen and there’s some odd clipping now and again that sees objects pass clean through each other. If there had been full-on destruction, ala Red Faction, and a bit more civilian activity in the more built up areas we’d have had a new benchmark for the open world genre.

So, Just Cause 2 is a gorgeous, fun, rollercoaster of a game. It’s far from perfect, but its best qualities shine through, leaving the lacklustre gunplay as more of a mildly unpleasant aftertaste than a meal ruining disaster. It’s a game that begs to be messed around with, for you to discover new ways to use the tools at your disposal and to take it all in the light-hearted way the developer intended. Chances are you’ll forget why Rico was on Panau in the first place, but his exploits should live long in your memory.

Just Cause 2 is a game that begs to be messed around with, for you to discover new ways to use the tools at your disposal and to take it all in the light-hearted way the developer intended.
8 Looks gorgeous Grappling hook is awesome Great mission variety The voice acting is terrible