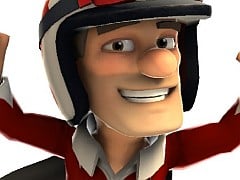 As a child, I always used to doodle a wicked sweet pair of shades and a massive grin on the sun, forever beaming comforting Crayola rays in the background of my picturesque scrawls. I grew up with age. Guildford-based Hello Games, thankfully, did not: Joe Danger’s cardinal rule seems to be that if you can draw a smiley face on something then you absolutely must.

Joe Danger is a bright, saccharine game and those used to the monochromatic will probably need to wear sunglasses while playing until their eyes adjust. But, really, who hasn’t missed the days where big red springs and chunky spike pits were major design features?

This XBLA-exclusive Special Edition, released over a year after its vanilla PlayStation Network counterpart, arrives with a surprisingly candid confession on behalf of its development team: Joe Danger, the motorcycle aficionado dubbed in-game as the world’s most determined stuntman, was released last year because the team ran out of money.

Joe Danger: Special Edition, then, arrives with the promise of refinement – the original’s jagged edges have been smoothed over. Quite literally, in fact; tweaked innards help the game run with 4x MSAA and a sharp reduction in load times, and the game’s pleasing rhythms of trial-and-error now culminate in a leaderboard screen that actually pops up with gusto.

While Joe Danger initially looks and feels like a retro homage, it’s actually more of a celebration of youth in all its exuberant buoyancy. This isn’t a title simply trying to ape the spirit of the 90s, then, but a game made by a team collectively imprinted with the memories and experiences of growing up with the SNES, Mega Drive and original PlayStation.

Joe Danger clicks after a couple of hours, but even after multiple sessions with the game the amount of actions can occasionally prove overwhelming. Yet the game’s charm and design ensure that you’re never far away from having another go – while the game is unashamedly trial-and-error, its main priority is to ensure you have fun – and the gradual difficulty curve helps keep Joe’s motor running.

It helps a lot that each of Joe’s individual components are cleanly incorporated, such as the simple but engaging trick system mapped to each bumper, where increasingly intricate flourishes can be achieved by tapping and holding them in various combinations. Even the showy boost button is subtle and considered, presenting tender little squeezes of raw horsepower to assist in pulling off the more advanced moves on offer.

New to the XBLA version is the Special Edition badge, awarded on specific levels when you accomplish all of their varying objectives in one smooth, unbroken run – this is Joe Danger at its most technical and demanding. It also affords the game a sharpened focus, letting you cruise through each stage collecting the distinct objectives individually, which awards you coins that are spent to enter later events, before you pluck up the courage to take on the grander challenges.

While the crust of the game revolves around collection, combos and speed, there’s plenty of variety added in offshoot events like races against the nefarious Team Nasty, puzzle challenges, or even the odd spot of tenpin bowling. Then there’s The Laboratory, a set of 25 bonus levels concocted to sharpen and subsequently challenge your understanding of the game’s more advanced mechanics.

There are still failings within the core game, however, such as the inability to save or view replays of your best death-defying adventures – an option that was patched into the PlayStation 3 version of the game. It is almost painful to pull off that once-in-a-million run and then immediately have to consign your masterwork to little more than human memory, forever unable to effectively showcase its potent majesty to your friends.

Local multiplayer is also offered, in the form of a diversionary two-player split-screen mode across multiple race events. Here the game loses some of its finery by sacrificing framerate, and it’s unlikely to hold your attention for long; the real multiplayer challenge will take place on the leaderboards.

After the initial confusion wears off, then, Joe Danger becomes an absolute hoot that’s packed full of entertaining content. Joe Danger is a heady mix of multiple objectives, but each objective is worth your time. The colours, the speed and the sheer vibrancy of it all are both overwhelming and delightful, and it is all too easy to surrender yourself into a cheery loop of restarts and retakes in pursuit of that perfect run.

Joe Danger: Special Edition is a charming triumph, an absolute joy to play, and a fresh modern title that effortlessly manages to play the same notes as the best video games of the 90s.

Joe Danger: Special Edition is a charming triumph, an absolute joy to play, and a fresh modern title that effortlessly manages to play the same notes as the best video games of the 90s.
9 Fun Challenging Charming Replays can't be saved

Joe Danger you take on the role of Joe, the world’s most…

Joe Danger you take on the role of Joe, the world’s most…