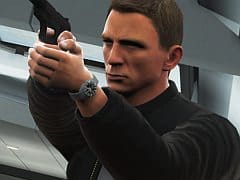 Blood Stone starts alright, I suppose. There’s a chase, some explosions and a bit of shooting right after a cutscene where Bond parachutes out of a plane and kicks somebody to death. You’ve got some jazzy opening credits – just like in the movies – where Bond punches people so hard they pop into diamonds, and Joss Stone also does a bit of singing. There’s even a virtual rendition of how Dame Judi Dench would look if somebody made a scale copy of her face out of Play-Doh, and then accidentally dropped it on the floor. It’s all very okay.

But then it all goes completely tits up. By the end of the second level, Blood Stone has shown its true colours: not content with being slightly – ever-so-slightly – above average, Bizarre Creations has worked hard to create a befuddled mess – one that haphazardly scrambles its way across a few locations for the course of an afternoon before closing on one of the most ridiculous, unexplainable and tedious endings I’ve ever encountered in a video game.

Bond spends his precious 5 hours trying to work out why the game is called Blood Stone (though nobody ever attempts to fumble up an explanation) while gunning his way across the globe, sometimes taking the time required to shoot waves of identical henchmen in the forehead – usually from behind the cover of a chest-high object. And while 007 might act like a spy he moves like a truck, with a wide turning circle and sticky, finicky controls working together to make the game’s staple cover-to-cover navigation gummy and cumbersome.

While a selection of near-identical SMGs and assault rifles help perforate the villains, Bond’s signature P99 shows up as the mandatory sidearm. Enemies are weak and brittle, and usually a quick squeeze of an automatic weapon will put them down – though the henchman army does adopt Kevlar and helmets later on, which requires a second tug on the trigger. The end result is always the same, however: traverse a dull corridor, kill a dozen bad guys, repeat.

Bizarre attempts to mix up the combat by adding in a flimsy stealth element and one-button melee kills; the latter recharge one of three ‘focus’ slots which act in much the same manner as Splinter Cell Conviction’s Mark and Execute system. It’s simple stuff, but Focus is an interesting idea that is almost never, ever, required at any point whatsoever.

At least you can take in the sights. Bond gets his (probably fake) passport stamped at Moscow, Tunisia, Bangkok and Burma, yet Bizarre manages to take the globetrotting superspy – with all his class, decadence and penchant for finery – and strip out any sense of luxury. He might be driving a sports car which costs more than I’ll earn in a decade, but his day job is about as exciting as a weekend team-building conference in Lowestoft.

The action is brisk and punchy but painfully generic, and all of the game’s major set-pieces and confrontations are delivered via cutscenes. All the player can do is run from one tedious passageway to the next, blasting away at the goons.

It’s as if Blood Stone was pitched on the idea that being plainly pedestrian was somehow acceptable, or that a game which sort of ticks some of the boxes will be enough to satisfy. Whether its many failures stem from a developer out of their depth, or a team placed under unrealistic time constraints, the finished product is so overwhelming bland it’s actually tiring to play. It’s like eating an entire plate of rice served completely on its own.

I would say it tries hard but falls flat, but with Blood Stone you get the distinct impression Bizarre isn’t even trying. Every now and then you’ll do a bit of driving, for instance, which is an area you’d think the respected racing developer would be able to comfortably handle. Sadly, these bits are just as grim as the rest of the game: dull, lengthy sections designed solely to pad out the third-person shooting sequences. They might look suitably daring, with plenty of fancy bits of scenery collapsing, smashing and exploding, but these vehicular chase sequences are obnoxiously scripted – preventing you from catching your adversary until you cross that all-important invisible barrier.

Attempting to keep you from the Checkpoint Reached notification are various pitfalls: one level has you driving over ice, for instance, with bits of the frosty flooring predictably giving away every now and then, usually throwing a spanner in the works. The most frequent danger is other vehicles, and scripted traffic will often bunch up in certain formations, causing you to drive head-first into the Mission Failed screen until you memorise the layouts.

The combination makes for a particularly easy equation: average shooting and average driving make for your average licensed video game. But Blood Stone goes one step further and even sullies the license it’s basing itself around, especially surprising considering the top-tier talent – and Joss Stone, inexplicably – Bizarre drafted in to work on the game. The game forgets the charm of the character, using Daniel Craig’s decent performance as a springboard for banal blasting. Oh, and there’s also some late-game philosophising: after gunning through virtually inexhaustible human cannon fodder for the past five hours, the game concludes with an elevator ride and some needless prattle from Mr Nemesis (over a PA system, no less) about the nature of Bond’s life and profession. Seriously, Bizarre?

Occasional glimmers of hope with Blood Stone are killed by an unwavering torrent of mediocrity – I haven’t even mentioned the throwaway multiplayer mode, for instance, and I think that’s for the best. While a crippling lack of ambition serves to dampen any fledgling hopes of entertainment, even the cutthroat aspirations of Katie Waissel couldn’t hide the fact Blood Stone is a product built on shaky foundations.

Occasional glimmers of hope with 007: Blood Stone are killed by an unwavering torrent of mediocrity.
5 Good voice cast. Generic driving. Generic shooting. The smartphone is annoying.

Players will experience full-throttle, behind-the-wheel action on land and sea while using…

Players will experience full-throttle, behind-the-wheel action on land and sea while using…