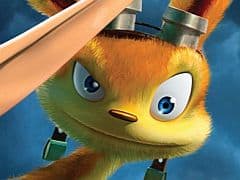 There hasn’t been a Jak and Daxter game for ages. After the duo made such an impressive debut on the PS2 back in 2001, the series dropped the “and Daxter” part of the title, went darker and placed a larger emphasis on using guns. Developer High Impact Games, the team responsible for the PSP Ratchet and Clank games, has taken over the reins from Naughty Dog, picked up after the events of Jak 3, and put Daxter back in the title. The result is Jak and Daxter: The Lost Frontier, the studio’s best PSP game to date.

I don’t think I’ve ever fully understood the plot of the Jak (and Daxter) games, but it’s all got something to do with Eco; goo found in numerous colours that has the power to do wonderful things. In this PSP adventure our duo are involved with Sky Pirates, meaning much of the game is spent roaming the skies and then landing on islands below to continue your journey on foot. The two distinct styles work well together and give this PSP game an identity of its own.

In The Lost Frontier, Eco grants Jak new abilities essential to making it through the game’s many platforming and puzzle challenges. Red Eco, for example, lets you fire off a ball of energy that can be shot and detonated, causing a great deal of damage to enemies and breakable objects. Yellow Eco lets Jak use a rocket hover jump, letting him reach high platforms, and there are more to discover.

Early levels don’t ask much of you, more or less making it obvious which Eco power is needed, but things do become more interesting and challenging as you progress through the story. You’ll eventually need to use a combination of powers, and while it’s never taxing to the degree that your brain hurts, it’s enough to make you feel smarter than you were a few moments earlier. Eco can also be used to purchase new moves and enhanced abilities, giving Jak more options while fighting off enemies.

The Lost Frontier, like its series predecessors, features a mix of platforming and combat – both melee and projectile-based. Jak is pretty nimble, able to jump from platform to platform, clamber up onto ledges, swing across beams and generally navigate through each of the diverse locations with ease. He’s also quite nifty with his fists and doesn’t shy away from guns. Melee attacks are fairly basic, but there is a combo system for more advanced moves – not that this ever reaches true hack ‘n’ slash levels.

Gunplay comes from the modifiable and upgradeable Gunstaff. If you want more brute force, switch to the shotgun-type mode, while more mindless firing can be achieved with the machine gun add-on. The game never reaches the heights of the weapon upgrades system and diversity found in the Ratchet and Clank games, but it’s certainly a neat mechanic.

For some the gunplay will be a little unrefined. There’s no lock-on ability or target switching, meaning aiming can be a little awkward at times. Jak will simply target whichever enemy is closest and in front of him, which works well enough most of the time. PSP games often suffer due to the handheld’s limited control options, but apart from the odd aiming difficulty there’s little to complain about here. The camera’s smart enough to show you the best view of the action and you can manually move it around using the shoulder buttons.

Daxter is the star of his very own game now (the excellent and imaginatively titled PSP game “Daxter”) so he’s not content to simply sit on Jak’s shoulder for the duration of the adventure. Daxter has his own set of levels, making use of Dark Daxter, a Dark Eco mutated version of the lovable guy that looks like a cross between the Incredible Hulk and the Tasmanian Devil. These levels see Daxter smashing and crashing through enemies and environmental objects, activating switches to solve minor puzzle elements, and generally causing chaos. His tornado spin is the most deadly of his attacks, and also the most fun, letting you leave your brain at the level’s start as the enraged beast goes crazy. As fun as these sections are, they do become a little samey after a while and it’s a shame Daxter doesn’t get to take part in the adventure in a more traditional fashion.

In between the on-foot action you’ll be flying around in sky ships, in what feels remarkably like the classic Crimson Skies series. This dogfighting, which takes place in open (to a degree) environments and more closed tunnelled sections, is great fun, with an easy to use targeting system and a ship upgrade mechanic. Some of the collision detection at points seems a little off, with the game indicating you’ve hit an object when it appeared to pass you by, but it’s a minor issue and one that rarely causes trouble.

High Impact Games has been working on the PSP for some time now and it shows. The Lost Frontier is a stunning-looking handheld game, mixing highly detailed models with huge environments that stream without any mid-level loading. Audio work is also superb, with some small pauses in sound as data is accessed from the UMD being the only thing worth complaining about. There appears to be a massive gulf between the presentation in the triple-A PSP games and the rest, and The Lost Frontier is most certainly near the top of the pile.

The wait for a new Jak and Daxter game has been a long one, and we’re still waiting for the series to arrive on the PS3 (blame Uncharted and its success for that), but this PSP outing doesn’t disappoint. The adventure is fairly short if you don’t include the optional side missions, but it’s always enjoyable and mixes its various gameplay styles successfully. High Impact Games missed the mark with its Ratchet and Clank spin-off “Secret Agent Clank”, but The Lost Frontier more or less nails the Jak and Daxter formula.

High Impact Games missed the mark with its Ratchet and Clank spin-off "Secret Agent Clank", but The Lost Frontier more or less nails the Jak and Daxter formula.
8 Superb visuals Impressive mix of gameplay styles Gunplay could be better Campaign is short

Jak and Daxter: The Lost Frontier

Jak and Daxter: The Lost Frontier