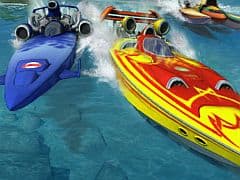 If you owned a Dreamcast and didn’t love Hydro Thunder you are probably dead inside, or at least starting to rot. Back then arcade games were still cool and the sight of them running on home consoles was thrilling. Midway’s water-based, turbo-charged racer was one of the best, boasting incredible graphics, breakneck speed and some of the biggest vertical drops in video game history. If you suffered from a fear of heights then the leaps of faith on offer were probably best avoided. Now, more than 10 years later, the speedboat racer has received an Xbox LIVE Arcade sequel.

Calling Hydro Thunder Hurricane a back to basics racer would be doing it a slight disservice, but it’s certainly using the mould created by the classic arcade titles of the 90s. The single-player mode is divided into four categories: Race, Ring Master, Gauntlet and Championship.

Race is you against 15 others, all competing to get to the finish line first; Ring Master is a time trial in which rings litter the course, each one missed adding on time and resetting your boost; Gauntlet is just you against the clock, with the added problem of explosive barrels to avoid; and Championship is a collection of the other three event types bundled together into a series. I found Gauntlet to be a tad annoying after a while, but the others are great fun.

That’s your lot, but each successful finish in an event or championship earns you credits, which in turn unlock new tacks, boats and events. Early on you’ll breeze through, but later events require an awful lot of credits before they’re made available, so you won’t be unlocking all the content until you’ve invested a lot of time. Various difficulty modes add to the challenge, but you’ll only feel truly in control once you’ve mastered the boost system.

Each of the water craft have their own attributes, making them feel different on the water, but it’s the use of the boost that will separate the pros from the novices. A simple use of the turbo to zoom past opponents is one thing, but using it to help corner is a lot trickier, boosting in air to avoid walls is a neat trick, and boost jumping (which propels your boat into the air) lets you reach pick-ups and access secret areas.

A boost meter determines how much of the juice is remaining, with large pick-ups on the track and in the air replenishing it. Initially it’s fair to say that Hurricane just feels like a fairly bog standard racer, but the boost system adds far more depth than is initially apparent. Learning the best route is also essential as every track can be tackled in a number of ways once you’ve learnt the layouts.

Outside of playing solo you get a suite of multiplayer options. On a single console there’s four-player split-screen, which is great fun providing you can handle the reduced visibility from the small windows. Online provides races and a neat rubber duck mode, with a maximum of eight players. You can even get four players on a single console and then head online to recruit four more. Rubber Duck is similar to the classic PGR Cat and Mouse game mode, with the goal being for your team to get its rubber duck (a slow boat) across the finishing line first.

Hurricane doesn’t have the production values of a full retail release, but judged against other XBLA titles it’s damn impressive. The frame rate is more or less rock solid, the tracks are huge and well designed and the water effects are excellent. It doesn’t have the same impact the original Dreamcast release did back in the day, but it definitely doesn’t feel out of place on the Xbox 360.

1200 Microsoft Points might be seen as a lot by some people, but there’s really a lot of content here, all wrapped up in some of the slickest presentation seen in an arcade-style XBLA release. If you want some nostalgia with a modern feel, take Hydro Thunder: Hurricane for a whirl.

1200 Microsoft Points might be seen as a lot by some people, but there's really a lot of content here, all wrapped up in some of the slickest presentation seen in an arcade-style XBLA release.
8 Multiplayer is fun Great visuals Old-school arcade feel Quite basic at heart