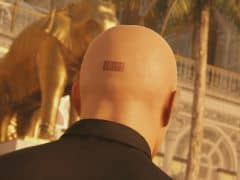 In Hitman’s newest mission, Club 27, Agent 47 finds himself – or can find himself – in a penthouse bedroom, sitting behind a modest dressing screen, having performed the rather immodest act of shooting a young man in the back. Whether or not Jordan Cross (played by it’s-not-him-but-looks-exactly-like-him Jared Leto) has had his six is unclear, but what is clear is that it’s one of the more striking moments in the entire series: a man in an easy chair, gun in hand; another, deader man in front of him; an incriminating recording, which lured Cross into the trap, still playing on a laptop near his head. For a series built on agency, wit, great escapes and best laid plans, quick thinking and quicker action, it’s an unusual chance for reflection: you can sit there all you like. No-one is coming.

It is one of the best moments in one of Hitman’s more interesting levels: another hotel, yes, but one filled with the tricks and traps, cute deceit and clever infiltration that makes this 2016 series so strong. More than that, it’s one of those Hitman missions where your target – or one of the bastards, at least – isn’t an arms dealer, or a rogue general. Nor is he a people trafficker, and I can’t say that he’s involved with paedophiles either, like some of your previous targets. No, Jordan Cross’s crimes are presently having a man bun and formerly killing his girlfriend, generally by accident and specifically because he’s a coddled toddler. Still, it is implied that his most heinous crime, aside from being a vegan, is that he used his famous father (Richard Branson, or not) and his father’s billions to cover it up and evade justice: it’s intimated that he didn’t mean to kill anyone, as redundant as that may be.

Cross, then, joins the list of corpses that aren’t necessarily in league with evil, just occasionally touched by it: part-timers, soon to be Short-Timers. Like Blood Money’s Swing King (misdeed: accidentally killing kids through negligence), Cross is another victim who doesn’t need to be destroyed: no world will be saved or lost on his living or dying. Instead, his demise is predicated on simple revenge, and that ultimately he just can be killed, and he must be killed. It lends a delicious twist to a game already in love with the idea of macabre professionalism. Personally, I always like these targets: it gets rid of the sheen of a moral imperative, a greater good, and exposes the truth: you’re a murderer in these games, a good one at that, and you like it.

It’s something to ponder, at least, as you explore the grounds and interiors of the Himmapan hotel in Bangkok, a nice aesthetic change to the interesting if drab chrome and steel meets desert setting of Marrakesh. There’s life in every nook and cranny of the Himmapan: beautiful plant life, a wonderful atrium, the bustle of hotel staff and the hustle of coked-out rockstars recording a new album on the upper floors. It’s not as dense as Paris, but just as nice to tool around in, to experiment with. Oh look, a birthday cake, that could come in handy. Oh, a convenient third story balcony: sounds dangerous. And just who put this faulty microphone in the vocal booth?

Club 27 has a variety of ways to kill your targets, and it may be one of the best implementations yet of the opportunities system: multi-part hits involving pest controllers, mass poisonings, secret rendezvous, and at one point the amusing scene of 47 actively working for his target. (Sometimes pathfinding and AI trigger issues crop up, but they’re unusual, or were in my time with the mission.) Unlike Sapienza or Marrakesh, the hotel isn’t sprawling: it’s big, big enough to slip through the cracks, but it’s also tightly wound, logically plotted. For the player, it’s also something familiar. It’s a hotel, after all, no matter how grand, and you can feel that IOI has been having some fun with player’s familiarity with such matters. So of course you can call room service to have them come up and stock the minibar or make the bed – bringing their disguises with them – or leave a message at reception to lure a target out. It’s what makes the opportunities here work so well: the player already knows the hierarchy of the building. But how to exploit it?

Bangkok feels naturally more immediate, more knowable, than Italian coastal towns or Swedish consulates, and it’s dense and devious even if it doesn’t quite hit the heights of Sapienza: that familiarity moves against it eventually, and for all its good work there’s not quite the feeling of discovery as found before. But it is a delightful mission, in the way that smothering people in birthday cakes or hitting them, Torrance-style, in the chest with an axe ever can be. It’s also a welcome change of pace: with nothing at stake beyond the killing of a lawyer and a man-child rock star, it soon feels like you’re just another cleaner in the hotel, albeit one with deadly – and at times disquieting – rounds to make.

Agent 47 heads to Thailand for his latest contract.

Agent 47 heads to Thailand for his latest contract.