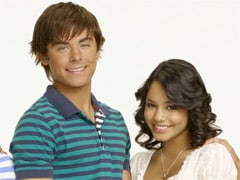 If you’re not familiar with High School Musical, then chances are you’re not a girl, you don’t have a girlfriend or wife, and you don’t have kids. Because if any of these three do apply, then odds are you’ll have come across this Disney phenomenon. For those not in the know, High School Musical is a movie which – and Disney can feel free to correct me if I’m wrong – was an attempt to recreate for the 21st Century what the 20th Century teenagers got in the form of the Travolta/Newton-John classic musical, Grease.

So it’s a boy-meets-girl story set in some Hollywood scriptwriter’s idea of what American High School would be like in an ideal world, which is about as far removed from reality as you can get. Ie: absolutely everybody’s happy, there are no guns, no drugs… oh, and people solve their problems through song. When I first heard about the film, every fibre of my being wanted to hate it for the shameless commercialised Grease rip-off that it surely had to be, but then my girlfriend made me sit down and watch it… and so help me I found myself enjoying it!

The reason for this is simple: everything about this movie is crammed chock-full of feel-good factors, from the cute teens in the bright, clean, sunny school setting where the worst that can happen to anyone is a half-hour’s detention, through the romantic boy-meets-girl, boy-loses-girl, girl-turns-up-at-boy’s-school plotline, to the incredibly upbeat and cleverly crafted songs and choreographed dance routines that will have even the most cynical amongst you tapping your toes to the beat. Manufactured, utterly unrealistic escapism schlock it may be, but in the dark and pessimistic world of today where terrorists and drug-dealers lurk around every corner, pretty-much anything you eat can give you cancer and even just having a shower is ultimately contributing towards global warming and the death of the planet, a little escapism is what we need! And that, my friends, is why I’m not ashamed to say that I enjoyed watching High School Musical.

Since the original High School Musical last year (probably showing back-to-back all weekend on the Disney Channel, in case you missed it) there has already been a sequel (the cunningly titled High School Musical 2 – wonder how long they took to come up with that?) plus a live stage show, and now – inevitably – we’ve got the video game. And being based on a musical, it’s hardly surprising that the game takes the form of SingStar-style karaoke affair.

Rather than go down the live-action music video route favoured by the Singstar titles though, the visuals for this game are provided by virtual set-pieces reminiscent of those in the Guitar Hero games. Each song finds one or more digitally recreated characters from the movie in one of the locations from the film (more of which you unlock as you play through) and as your singing prowess increases, so does the excitement and behaviour of the virtual audience (much like, again, Guitar Hero). This is a small touch that most probably won’t be that fussed about – for me, the joy of SingStar is always witnessing my friends’ hideous attempts at staying in the correct key, rather than the game itself – but it’s a nice feature for the kids.

With 10 songs initially accessible, taken from both High School Musical 1 and 2, you can opt to jump straight in and try these in either Quick Play or Party mode (the latter offering up to 8 friends the chance to challenge each other) or choose to play through the game in Story mode either solo, or as duets with a friend. Story mode, as you’d expect, takes you through what is basically a summary of the plot of the movie, told through voiceover narration from one of the characters with stills from the film, and each chapter basically sets the scene for the next song. If you’re not a fan of the film, these narrative interludes won’t do much for you, but then if you’re not a fan, you’re probably not going to go out of your way to play the game in the first place, so it’s probably a moot point.

Once the song starts, it’s pretty-much standard SingStar procedure – follow the words as they appear on the screen, try and hit the right key – if you do then the audience cheers you on, if you don’t, they don’t. Your performance is scored, and as your score tots up song after song, you start unlocking new tracks, which are then available to you in Quick Play and Party mode, up to a total of 30 in all.

And that, as they say, is that, aside from a few other bonus bits and pieces like alternate costumes for the virtual characters, and a few bundled video clips that look to have been ported across from the High School Musical DVD release, including cast interviews, behind-the-scenes footage and a ‘dance-along’ option which the kids will no doubt love as it teaches them some of the dance moves from the movie.

At the end of the day, if you’re not a fan of the SingStar games, then this is NOT for you. But if you like to swap your joypad for a microphone every now and then, and you don’t mind tackling some highly cheesy tunes (many of which you’ll find yourself humming for weeks to come – they really are that catchy) then you really should give this a chance. And if you’re looking for that perfect stocking filler for your girlfriend, wife or kids, then look no further… just don’t expect to get anywhere near your console over the Christmas period once they’ve started playing!

If you like to swap your joypad for a microphone every now and then, and you don't mind tackling some highly cheesy tunes, then you really should give this a chance.
7 Various unlockables to keep you crooning Nice variety of modes Features 30 different, upbeat songs Not everyone's cup of tea

Sing along to your favourite songs from the hit musical movie.

Sing along to your favourite songs from the hit musical movie.