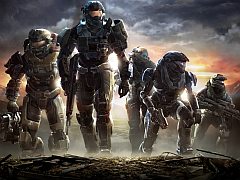 If ODST showed the Halo series could survive without Master Chief taking centre stage, Reach shows that planetary defence would probably go a lot smoother if he did. In his stead are the six-strong Noble team, a band of rugged SPARTANS dutifully tasked with driving warthogs, using melee attacks and being far too cool to ever look at any the many explosions they cause.

And, yes, Noble Team are a competent alternative to the stoic, one-man-army antics of Master Chief, the squad often going about their business by splitting off into smaller groups and kicking naughty Covenant bottoms. When it comes to acting as a posse of AI sidekicks, they certainly know how to get the job done. But Halo: Reach is billed as an emotional experience, and Noble Team have about as much collective personality as a bag of potatoes with faces drawn on. Watching their tumultuous downfall carries absolutely no sentimental weight whatsoever.

Part of this comes from one of the biggest examples of dramatic irony practiced in recent years. Reach’s downfall is preordained, and its very destruction segues into the opening sequences of the original Halo: Combat Evolved. Given that Master Chief was introduced as the last surviving SPARTAN, you know Noble Team’s activities aren’t going to go exactly to plan.

This doesn’t translate to an experience anything less than stellar, but if you bought into the belief of Reach showing the emotions of those giant superhumans, the ones living underneath those shiny visors, your expectations will need to be readjusted. Their role in the game is staunchly as support, with all their supposed expertise and offensive potency going up in a puff of smoke whenever the black bars roll away and the shooting begins.

Jorge is the useful one, a thunderous man-mountain who struts around with a minigun and actually manages to Get Things Done. On the other end of the scale you have Emile, who’s all bark and no bite: the skull painted onto the front of his visor hides the fact he’s utterly useless the one time he takes to the stage. In the middle you have chatty sniper Jun and the po-faced seriousness of deputy Kat and bossman Carter.

They all exist to make way for you, however. Noble Six, whose only identifiable shred of personality comes from getting chewed out at the start of the game for having some lone wolf tendencies in his top-secret file. Six’s background is classified, and his opportunities to speak are scant. He, like Master Chief, is almost entirely a blank slate, existing solely to facilitate the player’s submersion in the world.

What this does, though, is allow Reach to reassume that oh-so-familiar Halo mould. But because that formula is so regimentally established, and Reach’s demise such a guaranteed certainty, Bungie is left with few opportunities to add characters and rewrite a list of features that would dramatically advance the narrative and action beyond previous games.

Where the game excels from former titles in the series is in its unremitting tide of embellishments, regarding both design and function, which stops Reach from falling down some familiar pitfalls. Over the course of the game’s nine levels, there are no recognisable instances of cut-and-paste corridor design, no excessively long sprawls through regurgitated mission objectives and no lengthy backtracks through previous landscapes. The significance this has upon the overall campaign is huge.

When it comes to the process of riddling your foes with bullets, the most noticeable feature to the game comes in the form of Armour Abilities, which function like the Arbiter’s cloaking in Halo 2 – represented on-screen as a circle that must be recharged in-between uses. These can be swapped out with others when found in single-player, and allow you to do things like sprint, use a jetpack, drop a shield or generate a hologram. The system works a lot better than Halo 3’s slightly cumbersome equipment.

The weapons, too, have all been tweaked and balanced to create the most consistent loadout yet, including a new Covenant needle rifle (get a few hits in quick succession and they’ll explode) and UNSC target locator (locks onto tanks, then blows them up) alongside familiar pistols, machine guns and assault rifles.

The real star of the show is unquestionably planet Reach itself, the game packed to the rafters with gorgeous sweeping shots of a tumbling, cracking and dying planet on its very last legs. Take the ice-tipped peaks of one vignette, complete with deep green skies and crisp blue surfaces, or the one that follows a few hours later when the sky (now a regular blue) is intertwined with rippling waves of enemy Banshees.

The first half of the game is essentially a tour of the planet’s primary industries – farming, mining, hydroelectric plants and so forth. These rather drab areas are, of course, livened up a bit by the unwinding realisation of the Covenant armada’s surprise attack. This is the Covenant as they used to be: mean, cruel and without any bits where you learn about their culture or jump on a chair and punch someone to death.

An interjection halfway through the game takes you through Reach’s atmosphere and into a Covenant frigate – the game’s only opportunity to have you explore anything non-human in the game. To do this, you pilot a Sabre spaceship and take to dogfighting in the stars in a surprisingly adept sequence that puts many dedicated flight games to shame.

As for the rest, the aesthetic is human architecture on another world: a hospital looks like a hospital, for instance. There are very few ornate alien artefacts to unearth, although the surface of Reach offers plenty of variety and a distinct look far removed from the lush playgrounds of those elusive Halo rings.

Bungie perfected their ‘thirty seconds of fun’ philosophy iterations ago, and by the time we’re traipsing around the shiny, Apple-esque city of New Alexandria there’s the leering sense the developer is basically phoning in the level design: have some grunts run around for a bit, a few elites pop in and then, bam, a couple of hunters every other level to cause all kinds of problems. We’ve seen it, been there and, if you’ve ever had a look at the clothes selection at a branch of Gamestation, probably bought the t-shirt.

Again, though, it’s hard to begrudge these familiar sequences when they’re so technically accomplished. It’s the usual Halo story, but it’s easily Bungie’s best campaign to date, though the later levels are guilty of existing in the slipsteam of the early game and the grand finale could have been a little more, well, grand.

Still, it’s a clever balancing act on Bungie’s part. The central conceit to the plot of the game is that Team Noble are, for the most part, powerless to stop what’s going on around them. Whereas Master Chief would be running and gunning through Covenant high command, probably to blow off the finger of the person in charge of killing the planet before he hits the switch, Team Noble are thrown into the epicentre of the conflict, forced to see colossal events unfolding without the aid of briefing screens, intel or a friendly A.I. for exposition.

Still, some bits come across as slightly odd. A lavish, first-person scuffle with an Elite, which follows a sequence that’s perhaps the best use of night vision since the Paris Hilton sex tape, puts you so close to your enemy you can see the slime on his quadruple-hinged mouth, though this is very near the start of the game and kicks off a trend that’s never repeated.

It’s also telling, perhaps, that Bungie has trimmed off much of ODST’s (and gaming in general) superfluous features. The screen is never graced with an Achievement tracker, and Reach’s surface isn’t littered with a bounty of collectible audio logs. It simply focuses on the campaign, and Halo: Reach is all the better for it.

Then, of course, there’s multiplayer. Firefight makes its return, tweaked and buffed so that it supports user-set rules – such as only running for a limited set of rounds – alongside Xbox LIVE matchmaking. Six maps are available and the idea is, as before, to blast away packs of enemies as a team, using a shared pool of lives and weapons, but it’s certainly a more robust implementation compared to its foundling state in ODST. And its co-op trappings are just as compelling as ever.

Forge World, too, beefs up Halo 3’s Forge mode by turning an entire Halo installation into a series of moveable blocks and pieces, allowing users to create DIY versions and gametypes on-the-fly with other players. You can fiddle with a coast, quarry, coliseum and even a cheeky inclusion of the iconic Blood Gulch. It might not be for everyone, but it’s hard to fault the wealth of options Bungie has provided to budding modders.

Traditional adversarial modes now feature oddball-esque Headhunter, where you hoover up as many skulls (generated by killing foes) as you can get your hands on. Stockpile has you carting multiple flags back to your base zone and then nipping into enemy territory to nick off with some more. These slot very nicely into the map rotation, alongside traditional Team Slayer, King of the Hill and CTF.

Invasion brings a touch of objective-based multiplayer to the series, pitting Spartans against Elites (each with their own abilities) and having them take on various tasks that usually involve standing around in big packs waiting to be picked off by a few cheeky grenades. There are now so many playlists padding out the multiplayer screen it’s amazing the box doesn’t have stretch marks over it. And don’t even get me started about the inevitable waves of DLC.

Actually, playing multiplayer is a treat. The weapon selection is better than it’s ever been, and trimming out things like dual wielding has allowed Bungie to pare the experience back and keep it regimentally focused. The DMR, which serves as the replacement for Halo 3’s oft-abused Battle Rifle, is still potent without ever feeling nearly as cheap, and even taking someone out with the standard assault rifle is more satisfying than it’s been in the past. Melee remains satisfying, too.

Armour abilities slot into the mix in the form of prescribed loadouts, easily determining your starting gear and allowing Bungie to keep control over the creative options available on each map. Other weapons are strewn across the maps, as always, and ardent players will quickly find that mixing both together is the key to developing long-term strategies.

Tying both single and multiplayer together is the XP system, doling out rewards after accomplishing pretty much any in-game action and allowing players to dress up their SPARTAN (across all modes, including campaign) from a hefty selection of boots, helmets and shoulder pads. You can even unlock Master Chief’s voice for Firefight, if you’re prepared to invest a gazillion hours.

The robust and extensive suite of features make for a compelling overall package. It’s an incredible campaign, and its less bombastic plot and clear-cut story stop it from getting bogged down in the sense of being overworked. Bungie has clearly proven it can step out of Master Chief’s gigantic shadow, although I’m not so sure Microsoft will be able to do the same. Anyone following the Halo series for the last decade couldn’t ask for a better game, as Bungie has exited its most precious series with one almighty, planet-shattering bang.

The story from the beginning

The story from the beginning