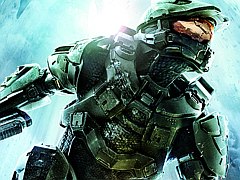 Dealing with your expectations can be tough. “I thought you’d be taller,” says new-fangled SPARTAN-IV captain Sarah Palmer when meeting up with Master Chief for the first time in Halo 4. Yeah, ain’t that a kick in the head: I thought he’d be tucked neatly away in the cryo chamber for a lot longer than five years.

But the fact Cortana couldn’t even wait for the next Xbox before defrosting Master Chief never really feels like a disappointment. Lavish and meticulous, this is easily one of the most expensive games of all time – and it feels like it, too. As an early cutscene shows a gargantuan starship falling out of the sky, you can actually feel the full brunt of Microsoft’s enormous wealth smashing down to the surface of planet Requiem.

Halo 4’s campaign is at its most comfortable when working overtime on visual spectacle, conjuring up deft, sweeping sci-fi scenes of nearly unrivalled bombast. You’ll see entire Covenant armadas blasting streams of gunfire across detailed skies, the wondrous expanse and jutted ledges of majestic Forerunner engineering, and the strongest ever show of UNSC force in this exceedingly armed conflict between huge warships, colossal tanks and monolithic alien structures. The engine underpinning this grand exhibition has also been on the receiving end of some serious upgrades, its lines of code and script producing what will likely be the Xbox 360’s most luscious visual spectacle.

There is simply no restraint in 343 Industries’ vivid and saturated vision, and the game is ceaseless and utterly conclusive in its attempts to win you over with lavish sights and sounds. With all this decadence on display, however, and perhaps constrained by the fact many of us are now intimately familiar with this universe, Halo 4 never quite manages to capture that initial wonder of first encountering the solemn, understated threat of Installation 04 over a decade ago.

But the planet Requiem is not without its own scenes of wonder, and one of 343’s most successful gambits is the game’s ability to play with the series’ conventions. One trip to the forest could initially fit right into the opening level of Halo 3, for instance, but before long the bright skies turn dark and the player starts spiralling upwards around dense foliage and twisted treelines. There are, however, occasions where 343’s reverence feels more like emulation, and a weary and prolonged ride on a Forerunner gondola feels like it was included because of a checklist rather than out of genuine desire.

Over the course of the eight levels and six hours it takes to play through the campaign, dubbed the opening chapter to the Reclaimer trilogy, you’ll quickly realise that this is not Bungie’s Halo. The game’s design loops and combat rhythms are studious replications of what has come before, and much of the game feels like a greatest hits compilation for the series’ best moments. Halo 4 plays like Halo 3, 2 and 1, then, but it doesn’t feel like a Bungie game. 343 Industries has shifted the tone in the game’s presentation, narrative and set-piece design.

Bungie’s Halo, for instance, is a five-game compilation where pretty much everyone you ever encounter ends up dead, a series about exploring alien worlds marked by a sense of wondrous isolation as Master Chief single-handedly cuts through entire armies without comment or consideration, but an occasional pithy remark. At the end of Halo 3 he is stranded in a desolate pocket of a vast, unexplored universe; as Halo 4 commences it feels more like he was just twenty minutes down the galaxy from Earth this entire time.

What of isolation? Halo 4 builds a 4-mile space cruiser – the UNSC Infinity – and packs it full of Spartans, creating a new iteration of gaming’s quintessential supersoldier that have faces, names, and families and act like the smack-talking marines from films like Starship Troopers and Aliens.

Silent no longer, Halo 4 is a game full of talking – even the stoic Master Chief feels the need to spout off lines of conversation every thirty seconds, his tone now so conversational and breezy that I initially assumed 343 Industries had hired a different voice actor. The overarching plot plunges Chief and Cortana (and it could quite easily be argued that she is actually the main character of this game, though any discussion here would be a spoiler) deep into the slightly weary and broad space opera that defined the series’ middle titles, as opposed to the crisp and simple sci-fi bookends of the original Combat Evolved and Halo: Reach. You’ll also notice that there’s a lot less humour in 343’s Halo, exemplified by the fact the Grunts have lost much their squeaky-voiced comedy, and the tone of the game has been aligned with the po-faced seriousness of its novels and comics.

Much of this narrative posturing comes from the return of the Forerunners and a script that attempts to deal with the nature and history of mankind itself – subjects that find themselves a bit of a hard sell in a game where the overblown explosions that result from well-thrown plasma grenades often make for its best stories. Yet it’s also a very telling sign of 343’s design mentality, and their cast-iron desire to control and focus the experience of the player, that the game’s first and last confrontations are both played out via cutscene and QTE.

The joy of Halo is still resolutely in its metred flow of scrappy open combat against the plucky AI, where hunting down fleeing Elite for that crucial finishing shot is still as resolutely entertaining as ever. Mixed in with the returning Covenant forces are now Requiem’s robotic Forerunner guardsmen, a mix of quadruped attack dogs, floating sentinels and the aggressive Knights, a slow moving nuisance complete with menacing exoskeleton and thick carapace who take the role of the game’s brute force counterpoint to those slippery Elites.

The new enemies allow the game to mix-up its combat configurations, deftly switching from moments of claustrophobic swarm to more thought-out encounters and then back again. 343 takes a slightly more linear approach than the series’ old stewards, but Halo 4 still allows for multiple tactical options and is comfortable with its genre-leading organic combat. There’s no cheeky and unexpected bait-and-switch, no sudden Flood-like reveal, and Halo 4 keeps a far more consistent and expected pace throughout.

With a new class of enemy comes new weaponry to scavenge, though most of the Forerunner efforts feel like orange-tinted variants of standard FPS moulds – you’ve basically got a flimsy pistol, peppery submachine gun and an anarchic shotgun with a wide spread and the (admittedly showy) ability to dissolve enemies. These new weapons function, but they don’t excite.

Much of the Forerunner weaponry will take a backseat to the old favourites, then, and when it comes to the existing armoury Halo 4 opts for a kitchen sink approach, throwing in both the DMR and Battle Rifle while streamlining the Covenant offerings by strengthening the Needler and bringing back the Carbine. Closing the gap between enemies is made easier thanks to a permanent addition of a sprint, and the armour abilities introduced in Halo: Reach also make a (mostly unchanged, though Armour Lock is long gone) return. Halo 4 also opts out of dual-wielding and the balancing nightmare it would have inevitably created.

Clocking it at around 6 hours on Heroic, Halo 4 is a slightly shorter but tauter campaign than many of its predecessors. It’s a satisfying, energising return for Master Chief, and proof that 343 Industries is more than capable of keeping the component parts of enormous series in good working order. But it’s also designed to be anything but standalone, and its co-op and multiplayer modes are an aggressive effort to compete in today’s slightly galling service-led culture.

Primary amongst 343’s efforts is Spartan Ops, a scenario-based co-op mode which emulates the serialised nature of boxset television to create a season of ten episodes revolving around the SPARTAN-IV’s of the UNSC Infinity. Each episode contains five combat-heavy scenarios, mostly requiring your four-man squad to clear out a heavily fortified location. At time of writing only the first episode is available, but this initial taste suggests that the Spartan Ops campaign will be packed with functional but not stellar combat – a far cry from the intricate settings of the campaign. Hopefully later episodes will include some more thoughtful and inventive chapters.

Halo 4 has also inherited the series’ broad and engaging multiplayer combat, and has finally conceded to the unstoppable popularity of Call of Duty and its ilk to include customisable loadouts, ordinance drops for good behaviour and a heady breadcrumb trail of systematic unlocks across its suite of default modes. This is the most fundamental change to the series’ multiplayer in a generation, taking the onus off sourcing additional weapons (these are still available, but weapon drops are randomly placed) and allowing players to simply spawn into their game with a Battle Rifle and Plasma Pistol.

Much of Halo’s multiplayer flavour remains the same, however – this series became a battle between Battle Rifles and DMR’s long before today, though it’s impossible not to balk at the screen when the game now tells you to invest dozens of hours into the multiplayer before you can properly customise your emblem. The cosmetic upgrades from Reach make a return, with many of these now locked to both level and a broad catalogue of weapon and combat feats. And while we’re on the subject, the irresistibly addictive sets of daily and weekly challenges are still in place.

Maps, on the whole, feel smaller and less intricate than those seen in Halo: Reach, and many are clearly designed to funnel players directly into combat seconds after spawning. Most popular at the moment is undoubtedly Haven, a small, bright Forerunner base with angular geometry and numerous clear sight lines. It’s the epitome of Halo’s multiplayer design – clean and simple, putting its focus squarely on the jostling players.

There’s your usual set of team-based and solo modes, but these still serve as an occasional distraction from the meat of the online experience – Team Slayer. Multiplayer Halo still retains enough of its unique identity to stand apart from Call of Duty’s throng of imitators, then, and few shooters make you work for your kills with the same determination as this. But time will tell if 343 is prepared to foster and maintain its community with the same passion and commitment of the series’ former keepers, though it’s clear the features are firmly in place.

One fact is clear: this is no longer Bungie’s Halo, but much of what made the series such an irresistible proposition has remained intact for this new beginning. Rich, lavish and often spectacular, Halo 4 is an encouraging first effort from 343 Industries and a deserving entry into one of gaming’s most beloved franchises. Master Chief didn’t need to reawaken so soon, but I’m certainly glad he did.

This review was written after spending 15 hours with the game, the time divided evenly between single-player and multiplayer modes, which were played over an Xbox LIVE connection. Microsoft provided a retail copy of the game for the review.

This is no longer Bungie's Halo, but much of what made the series such an irresistible proposition has remained intact for this new beginning.
9 Combat still shines Gorgeous presentation Packed with features The narrative goes a bit squiffy at the end