While console gamers have been squabbling over which system has the best FPS (the Xbox 360 with Halo 3 if you want our opinion), PC gamers have been quietly waiting for their own FPS masterpiece to arrive. Half-Life 2 pretty much started next-gen gaming back in 2004 and developer Valve has now finally managed to release part 3 of the Half-Life 2 story: Half-Life 2: Episode Two.

Episode One ended on quite a cliff-hanger, instantly making gamers anticipate Valve’s next chapter. Looking back at it though, Episode One wasn’t as great as it could have been. For the most part it was fairly slow, it moved the story on very little and featured one of the most annoying sections of gameplay in any FPS I’ve ever played – I’m scared of the dark at the best of times. Still, its emphasis on play with the AI controlled Alyx served to show that you needn’t play with another human to experience some great co-op moments.

Episode Two is altogether more of a sequel to Half-Life 2, delivering a more diverse, longer campaign that ups the ante in terms of action and moves the story along where Episode One simply filled a gap. In terms of what’s new, Episode Two doesn’t deliver a whole deal, focussing mostly on the characters, weapons and enemies that we’ve been playing with over the past few years, but with the Gravity gun we already had one of the greatest weapons in FPS history, so this is more of a comment than a criticism.

As in Episode One, you play large parts of the game with AI characters, and one in particular proves to be one of the most likable comrades ever programmed. Games like Halo 3 have set a new benchmark in terms of chatter, both from squad mates and enemies, but the speech from your allies in Episode Two is on another level. It serves to flesh out the story and is consistently funny, even in the direst of situations. While most games these days feel rather dated without support for some form co-op play with another human, I can’t imagine Episode Two being nearly as good without my AI chums.

Although Episode Two runs on the Source Engine (the same engine that powers the original Half-Life 2), don’t think that the game isn’t up to much visually. Valve must have been working overtime on the engine, as Episode Two features some of the most detailed and open environments of any PC game to date. It certainly lacks some of the next-gen-ness of Gears of War and Unreal Tournament 3, but the lighting is exquisite and the enemy designs are simply brilliant.

The one new enemy, the hunter, is a superb piece of design, looking like a smaller, more muscular strider, and its animation gives it a sense of life that you’d expect to see in creatures found in our natural environment. As ever, special mention must go to the facial animations of the human characters, which still manage to outclass the efforts seen in practically every other modern game. Occasionally characters will move a little awkwardly, but Episode Two still features the most life-like AI characters you’ll see in an action game.

I’ve been deliberately vague about the experience as a whole, as Episode Two is once again a rather short game. It’s close to what many next-gen games deliver in terms of hours (coming in at around 6-7 if you’re at all decent), but dedicated PC gamers will be able to finish the chapter in one sitting. While disappointing, there’s not a moment of filler in the experience. Every level in the game has at least one incredibly cool moment and you’re never simply ploughing through a level to get to the next. Valve could quite easily have padded the game out to a more accepted 9-10 hours, but it would have spoiled what is a beautifully paced story.

When you do get to the end there is of course some disappointment but you don’t for a second feel short changed. The final hour is full of some of the most breathtaking moments in gaming history, with the end making the wait for Episode Three almost unbearable. As in Episode One, completed levels can be replayed with a developer’s commentary turned on. Markers in the levels work as triggers for the commentary to take over, explaining that section of the game and some of the story behind it. It really is worth playing through the game again as the commentary is not only entertaining, but the slower pace lets you appreciate the work that’s gone into it.

Half-Life fans are going to flip out over what Episode Two has to offer and FPS fans in general should find a finely crafted, lean experience. While Valve’s plan for episodic gaming has fallen a little flat (Episode Two is practically a full-blown sequel) there’s no denying they know how to make a thrilling FPS.

Half-Life fans are going to flip out over what Episode Two has to offer and FPS fans in general should find a finely crafted, lean experience.
9 Superb AI interaction Thrilling storyline Intense fire-fights It's over quite quickly 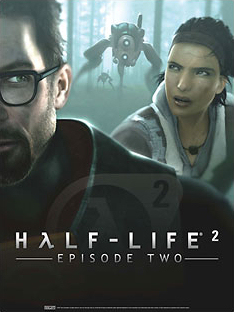 The second part in a trilogy of sequels to Half-Life 2.

The second part in a trilogy of sequels to Half-Life 2.