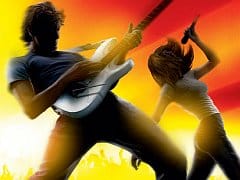 There’s a war going on out there, and it’s being fought with wireless battery-operated guitars: it’s a battle for the hearts of wannabe rock stars. Earlier this year Harmonix’s Rock Band took the upper hand, surpassing the Guitar Hero series with some sleek and sexy presentation, a more forgiving learning curve and a killer set of peripherals. Now it’s time for Guitar Hero to stage its comeback, and with Rock Band 2 strutting about on the horizon, the stakes have never been higher.

Of course, this kind of rivalry has always been a part of the music industry – think Oasis versus Blur, Biggie versus Tupac, Steps versus S Club 7. It’s debatable whether stiff competition helped those guys (it certainly ended badly for the rappers) but when it comes to video games, the consumer is the winner. Neither Harmonix nor Neversoft can afford to alienate all those people who’ve bought their previous games and peripherals; rather than dramatically reworking the established gameplay, they’re forced to polish up what’s already there and to focus on providing new, innovative features. In the case of Guitar Hero World Tour, this situation has resulted in what is easily the most enjoyable rock-em-up we’ve ever played.

So, what has Neversoft done so well? For a start, it’s wisely followed its rival in expanding the variety of instruments available to you, the wannabe rock icon. If you’re not in the mood to play lead or bass guitar, you can now sing into a USB microphone or hammer along on the drums. If you’ve already got the Rock Band drum kit you’ll be able to use that, but if you don’t then you should seriously consider looking at World Tour’s new wireless set. It’s an altogether sturdier and better-designed piece of kit, with three drum pads, a kick pedal and two raised high hats. Not only is this layout more realistic and easier to use, but the actual pads themselves are pressure sensitive – producing a sound that corresponds to the amount of force you use. They feel more solid and more satisfying to hit, plus they’re far less prone to making the loud ‘clacking’ noises that occur when using the Harmonix version. Your neighbours will no doubt be grateful for this improvement, though they’ll still have to suffer the noise of your cat-like wailing as you murder your way through Living On a Prayer.

While the new drum kit is clearly the star of the show as far as peripherals go, this year’s guitars are also really rather swanky. For a start they’re bigger and feel a bit weightier, while the strum bar has been made longer and easier to get at. Like the drums, the guitars now feature a pressure sensitive pad, located further down the neck from the standard buttons; this can be used as an alternative to the standard keys, or to trigger effects in the new studio mode – something we’ll cover later. Finally, there’s a new button near the strum bar which allows you to trigger star power (a kind of bonus scoring mode) without changing your stance – although old-school players can still just raise the neck of their instruments, as in the previous games.

All in all, the new gear is excellent. We’re sure that’s not the news a lot of you wanted to hear, since it might persuade you to fork out more of your hard-earned cash – but the truth is that if you want to stick to the kit you’ve already got, that’ll be fine. You’ll be able to get World Tour on its own or with just a guitar if you’re not fussed about the new toys; if you do want the full meat n’ two veg, it should cost you around £180 in the shops – or £150 if you pre-order. Some retailers are lobbing in a free bass guitar to people who do this, so it’s worth seeking one of these offers out if you’re thinking of going the whole hog.

Without further ado, let’s get back to why you’d want to get World Tour in the first place. The core gameplay remains largely untouched: you pick an instrument and a song, then play along as you watch notes slide down a scrolling vertical track. Hit the notes in time and you’ll knock out a pitch-perfect rendition of the tune; mess things up and your instrument will cut out – incurring the wrath of your audience. This basic system will be familiar to pretty much everyone by now, but for absolute newcomers there’s now a beginner difficulty level where notes don’t matter at all and all you have to do is strum in time. We can’t imagine many of you will be need to use this, but it’s nice to know it’s there all the same: it means that you can jam away like Hendrix on the expert setting, while your gran supports you on bass. Good for Boxing Day, n’est-ce pas?

For all you established Guitar Hero veterans, you’ve still got the progression of difficulty levels from easy to expert. The general consensus around our office was that World Tour is ever so slightly easier that Guitar Hero 3 – although the expert setting still frequently got the better of Seb, our resident rhythm-game guru. At this highest level you’ll now have to deal with more complicated power chord arrangements, whereby you’ll start a note with two fret buttons held down and will have to add a third halfway through. It sounds nasty, but if you’re good enough to play at this stage, you probably have nothing to worry about.

The important thing is that it’s still easy to improve your techniques through sheer persistence: practice makes perfect, and the full range of 86 songs offers a decent variety of challenge at each level. The main career mode now allows you to switch between instruments and difficulty settings at any point, and you’re now given a choice of gigs each time you progress. The end result is that it’s now all but impossible for you to get stuck on a particularly hard song – allowing you to fully focus on honing your skills and tweaking your rocker with new instruments and clothes. You can play the entire career mode by yourself or with friends – even electronic internet friends, if close proximity to other human beings isn’t your bag. Once again, this is a feature that was sorely missing from Rock Band (although in Rock Band 2), so we’re very happy to see it included here.

It seems a little odd that we’ve come this far without mentioning any specific songs. If you’ve been eagerly awaiting World Tour then the chances are that you’ve already seen the complete song list online. Taste is subjective, of course, but we may as well throw our penny into the hat and say that we think it’s pretty damn good. The three songs that everyone will immediately go for are probably Living on a Prayer (Bon Jovi), Beat It (Michael Jackson) and Today (Smashing Pumpkins), but there are plenty of other crowd-pleasers: Everlong (Foo Fighters), Eye of the Tiger (Survivor), Some Might Say (Oasis)… We could go on all day about the full line-up, but let it be suffice to say that there are a lot of top quality tunes, cut from a variety of rock-flavoured cloths.

Between this initial spread and all the downloadable content that Neversoft is promising, you’re pretty much guaranteed to find something you like. Even in the highly unlikely scenario that you don’t, there’s always the opportunity to go and make something of your own, thanks to the somewhat incredible inclusion of a Music Studio mode. You might be expecting this to be some kind of cheap add-on thrown in at the last minute, but the surprising reality is that you’re offered a remarkably deep set of tools. You can jam along with four mates at once, or you can go it alone. You can play along to a set bassline or drum beat, or you can meticulously construct an epic melody from the ground up. You can use your guitar to play the lead, rhythm or bass – or you can use it to play synthesisers, in the form of a keytar. Once you’ve recorded a tune, you can port it over to an editing suit where you can play around with the levels, create loops, and prune your composition note by note. And then you can give it a name, and some cover art, and send the whole thing online to be played and critiqued by the masses.

In other words, you can be a musician. There’s no support for vocals, sadly – apparently this is due to bandwidth restrictions – but apart from this, the Studio has everything you need to create your own songs. No, it’s still not the same as actually learning to play an instrument, but by Jove, it’s pretty damn impressive – particularly when you consider everything that’s gone into the main game. It may be the case that a large percentage of people who buy World Tour will never get into the recording options, but those who do are sure to be extremely happy. In a matter of minutes, we recorded a “freeform electrojazz sense-ballad” (in other words, a load of old twaddle), messed around with the levels, and then played it before a crowd. And because we played it on the hardest setting, there were more notes to hit than when we actually recorded the damn thing. We were booed off stage by a violent crowd because we sucked at playing something we had written mere moments beforehand. How cool is that? And if we had that much fun just messing around, how great is this game going to be once it lands in the laps of people who actually have some form of creative talent?

So yes, Guitar Hero World Tour is pretty darn wonderful. Okay, so the main bulk of it is yet another rendition of a game we all know by now, but it’s easily the best rendition of that game that we’ve seen so far. When you factor in the Music Studio and all the creative doors that it opens, it’s clear that this is by far and away the best rhythm game available on the market today. That’s good news for you lot, but for Harmonix? Well, we’d say it’s got a mountain to climb.

If this game rocked any harder, it would choke to death on its own vomit at the age of 27.
9 It just kicks ass, okay? The music studio is extremely powerful Huge fun, and more accessible than ever before The complete setup will cost you.

Get the guitars out again as it’s time to ROCK!

Get the guitars out again as it’s time to ROCK!