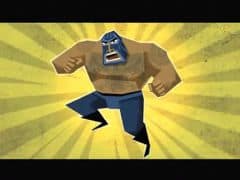 In many ways, Guacamelee! is stupid. The name alone should give you that impression. A loving take on the ‘Metroidvania’ style platformer, within its first few minutes the ridiculous nature of its premise is confirmed. Juan, a going-nowhere Mexican, is tasked with rescuing El Presidente’s daughter from an evil charro skeleton named Calaca. Makes perfect sense… The madness continues when – after being sent to the land of the dead by our boney friend – Juan discovers a luchador mask which, for absolutely no reason, transforms him into a well-skilled Mexican wrestler. He even wears a title belt.

The sole intention of this opening is to let you know Guacamelee! is not going to take itself too seriously, and it succeeds. Drinkbox Studios offers up its concept from the off, allowing you to simply enjoy the world from there on out. It’s hard not to get swept up in it too, given its tongue-in-cheek tone and how exceptionally well everything is presented. The art style is beyond cheerful and environments are littered with references to as many in-jokes that a game such as this can get away with. Rather than feel forced, they exist as background fodder for those who pick up on them to smirk at and feel content they’re not completely out of touch. The nod to Mario, for example, is done with a fair amount of grace.

There are other, more substantial, borrowings from videogames’ most universal star. At its core, Guacamelee! is a platformer, harking back to a time where their popularity was so high, we all had to put up with fodder like Bart vs. The Space Mutants. Rather than repeat horrid pitfalls such as that, though, the challenge laid down ranges from the satisfyingly difficult to the downright maddening. It’s a decision that will anger as many as it delights, the pleasant caveat being that, more often than not, events seem even-handed.

Well, most of the time. Juan is able to inhabit both the land of the living and the land of the dead at specific intervals. Jumping through a tear in the environment will switch up the landscape and the scenery around you, opening up access to previously restricted areas. It’s a simple mechanic that evolves into an utter tyrant where the aforementioned platforming is concerned. On occasion Guacamelee! will ask Juan to hurl himself off one wall, majestically falling through one of these tears, and adjust to the layout of the level as it switches. It’s a fine approach and there’s little doubt how proud you’ll be when you triumph – the sense of achievement is enough to warrant a phone call to your mum. For some, however, including myself, such sections do always threaten to trigger a cloud of red mist. A red mist that demands you hurl the console across the room while declaring that no one will ever buy this horrendous excuse for a game, before you grudgingly play on.

Guacamelee!’s world does go a long way to make up for any such annoyances. In true ‘Metroidvania’ fashion, the slice of Mexico you’re able to explore is to a certain degree open, expanding further as you acquire the tools necessary to bypass any barriers in place. This ties in with the combat too. You can mash your way through with some success, but finding an effective way to juggle fools is where the true reward lies. Throwing in a suplex or piledriver for good measure is just an amusing way to relive those pro-wrestling dreams of yesteryear.

Unfortunately, in almost an identical fashion to how the platforming can enrage, the same can be said for some of the enemies that turn up to beat Juan down. Again, those who relish the chance to test their gaming skill may find it somewhat pleasing, but in this instance numerous battles do feel slightly unbalanced. Constant death just isn’t that much fun.

Guacamelee! manages to paper over many of its cracks thanks to its deft humour and considered mechanics, and for that reason alone anyone who dares to pick it up will find it difficult to be disappointed. Being able to transfer the experience from your PS3 to PSVita, or vice-versa, is no bad incentive either. It’s a game with heart, and shows that Drinkbox has ideas well beyond what it has delivered previously.

Throwing in a suplex or piledriver for good measure is just an amusing way to relive those pro-wrestling dreams of yesteryear.
8 Light-hearted and genuinely funny Easy to love Horrendous difficultly spikes Runs out of steam before the end