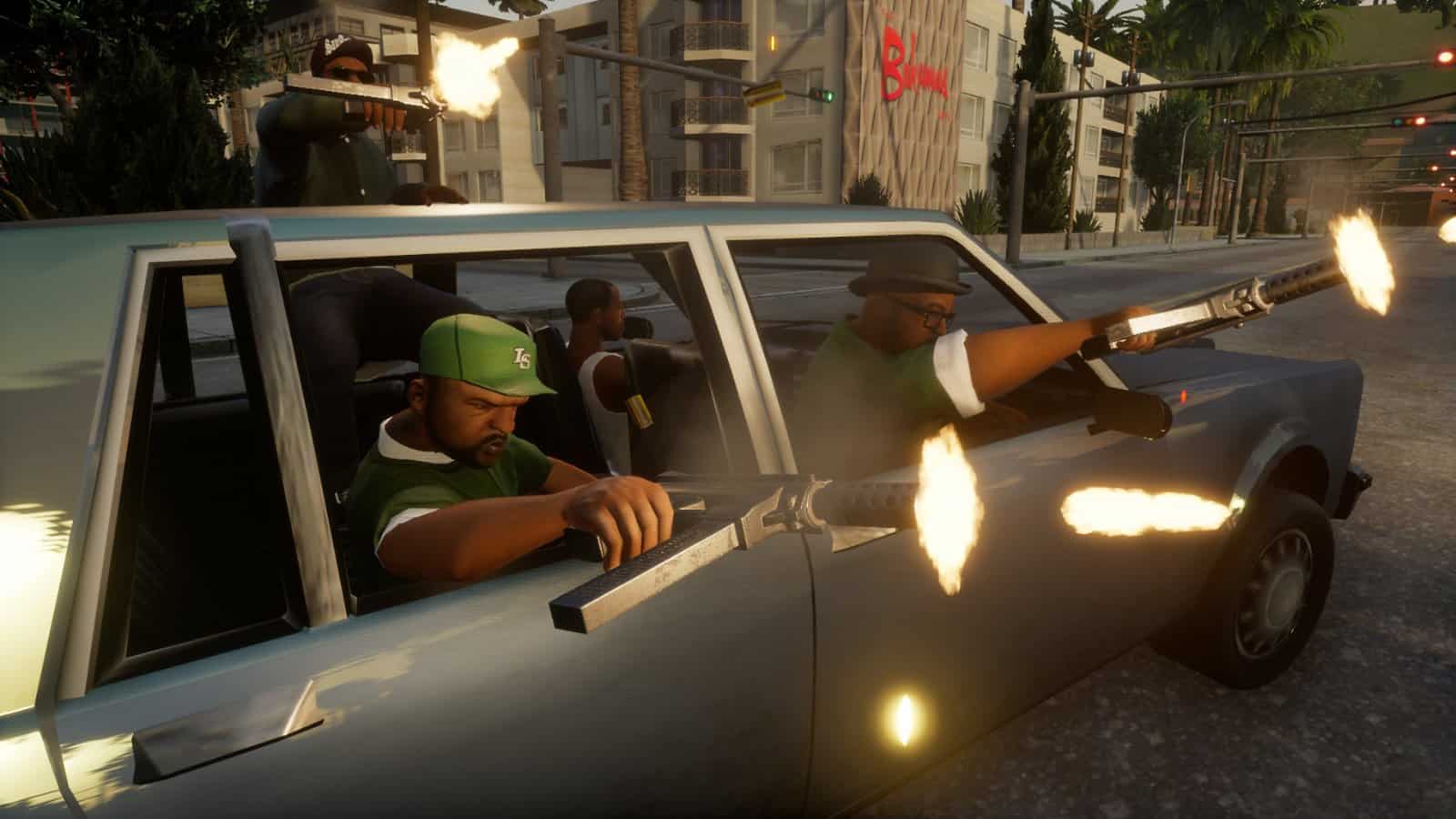 Okay, first things first. Lance is back, and so is his Infernus, as white and gleaming as toothpaste. Ken Rosenberg has had some work done: the bags under his eyes have been balmed to a healthy hue, and the deep creases of worry that held permanent residence on his forehead have been filled in. Tommy Vercetti, who always wanted his fingers in as many unsavoury pies as possible, now has the actual fingers to do it. Over in Liberty City, the floors in Ammu-Nation have been painted blue and buffed to a high shine. And Claude’s cargo trousers have been redyed; they are now a rich olive, with a waxy finish, giving his legs the look of a plastic army man. Furthermore, The sanitation departments of both Liberty and Los Santos have clearly received extra funding, because their pavements are no longer rimed with wind-scattered rubbish.

All of which is to say that Grand Theft Auto: The Trilogy—The Definitive Edition is upon us, and, once you’re done reading the title, you have the chance to venture back in time. Stood together, as if in a lineup, these three games—Grand Theft Auto III, Grand Theft Auto: Vice City, and Grand Theft Auto: San Andreas—are the richest achievement in the history of the medium. No pressure, then. The developer is Grove Street Games, though, in truth, the task of bringing these titles to the public feels less like development than like the restoration of a triptych of religious paintings. Get it wrong, and those who are familiar with every brushstroke will be baying for your blood. But getting it right is as much a technical matter as an emotional one; the real restoration lies in the polishing of every player’s memories, porting them tenderly onto new hardware while patching out the glitches in our recollection.

One problem with this bundle of classics is the claim made within its title. The trouble with putting the word “definitive” in the name, especially when it denotes merely the onward churn of technology, is that you signal a heavy tread—a blithe and indelicate attitude to the past. (I can’t help but think of the colourised version of Casablanca, from 1988, a process which Roger Ebert described as “computerized graffiti.”) Last year, we got Mafia: Definitive Edition, a ground-up remake of a game from 2002, reimagined with sumptuous fidelity; but I still preferred the look of the first, on the PlayStation 2, which was decidedly ground-down. Here, Grove Street Games has tried for something strange and admirable. Each game has been uprooted from RenderWare, the engine that drove them so far, and repotted in Unreal Engine 4—with the hope that they acquire their own bloom. 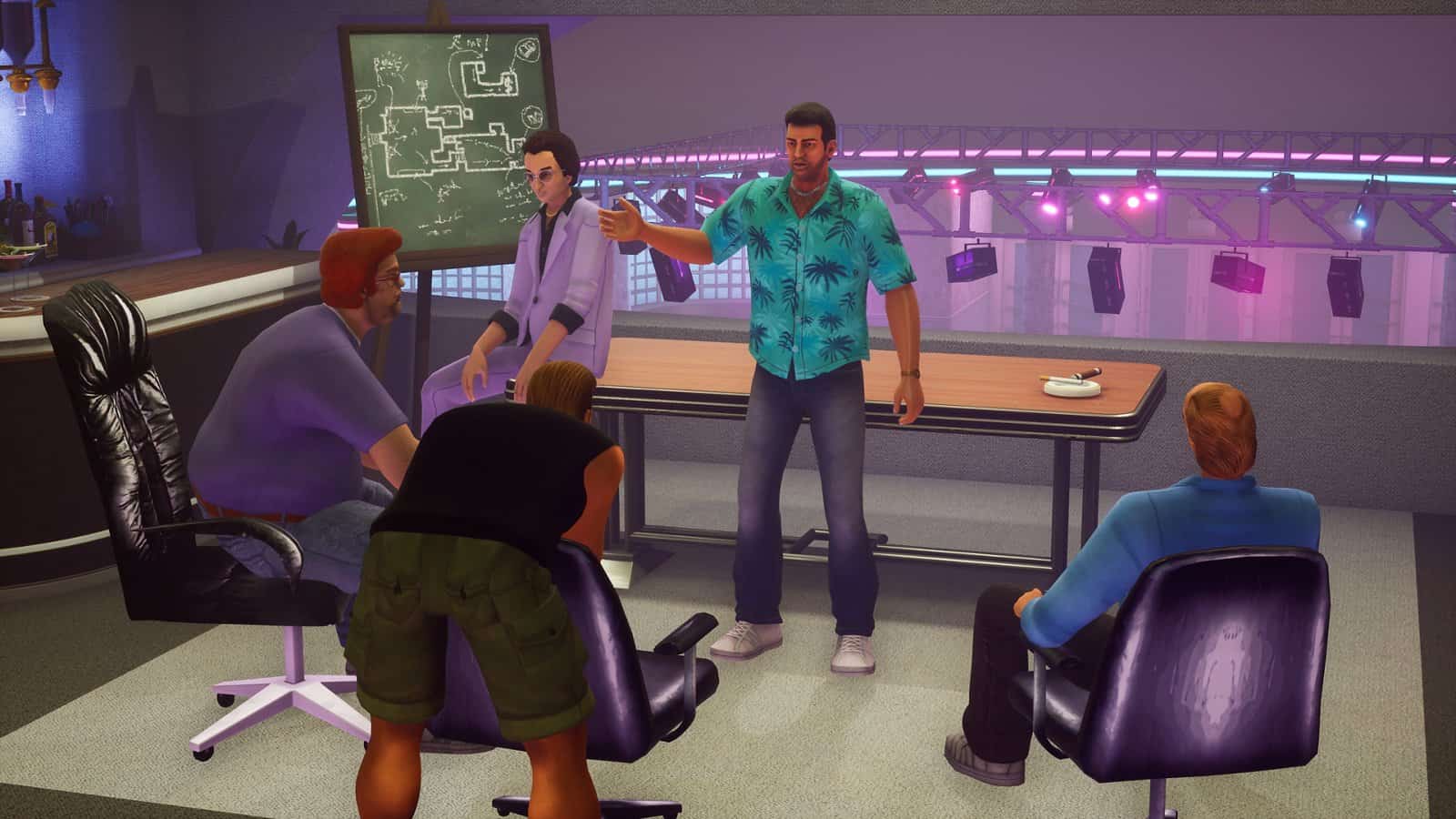 The visual style pays homage not only to the originals but to the illustrations that furbished their booklets and loading screens, which bore the mischievous suggestion that America’s criminal element was ruled by a crazed throng of cartoons. Hence the site of Ricardo Diaz, in the new game, whose frown lines appear to have been drawn on in felt tip. The art direction of the old games, by Aaron Garbut, performed double duty. With its chunky exaggerations, it seemed to slip the cramped limitations of the day’s consoles with fewer scuffs and scratches than would mark a more realist vision. And then there is the matter of moral depravity. Make reality a comic book, and the psychotic cracks that must, by definition, appear in these characters seem more like splashes of dark excitement that leak across the panels of life.

Unfortunately, these editions are not without scuffs of their own. Some minor characters have been less than honoured by the years. For example, in San Andreas, Denise Robinson, a girlfriend of the game’s hero, C.J., now has the wizened and wide-set glare of E.T. (I kept expecting her and C.J.’s dates to end with him, ever the gentleman, escorting her safely back to her ship in the woods.) Then there is Old Reece, the barber, who has been forced to rebrand as Fairly Young Reece, as his hair, previously rumpled and encrusted with salt, is jet black and neatly cropped. Aside from these stylistic stumbles, there is a string of bugs strewn throughout all three games. Naturally, the internet is flaring, and these flaws ought to be ironed out with updates, but what cannot be altered—and what will most pain the devout—are the changes wrought on each game’s texture.

Garbut has long been a connoisseur of light, able, somehow, to gaze at an era—be it the eighties, the nineties, or the mists of the early millennium—and to trap the time in the air. These versions boast new lighting and longer draw distances, but they don’t capture the mood of their forebears. To put it bluntly, Liberty City isn’t dirty enough; the grey-green murk through which Claude swam has drained away. And a similar fate has befallen Los Santos. The beer-tinted haze that drizzled down from above is now thinned and oxygenated, the smog blown clear, and there is something synthetic about the streets. They are awash with computerised graffiti. For my money, Vice City fares the best. Whereas the old game was quite happy to bruise the atmosphere with gusty gloom, and to pearl the camera’s lens with droplets of blood and rain, the remaster keeps things clean. Its pastel tones and lacquered smoothness—as though someone had spritzed the place with hairspray—suit the façades of that decade. It may fall short of its predecessor’s grime, but that is its unexpected coup. It is true to the lie.

While we are on the subject of rain: into each life, some must fall, granted, but does it have to look like an upturned pot of needles, stuck in a permanent glint on the way down? Driving at night is nearly impossible without crunching into a lamppost. I am, however, thankful for the wondrous glitch, while playing Grand Theft Auto III, wherein the showers managed to tumble inside Don Salvatore Leone’s gentlemen’s club—granting us the perfect image of a man  lapped in wealth but caught in a downpour of personal woe.

Set against these shortfalls are the occasions on which the graphical enhancements do speak for themselves—the glare that pools in puddles after a storm, and the foliage, which has been fed with fresh detail—and a slew of quality-of-life upgrades. These include updated controls, aiming systems, auto-saving and mid-mission checkpoints, the ability to add waypoints to your in-game map for both III and Vice City, and radial menus for both your weaponry and the radio stations. Which brings us to the most important, and most painful, point: the missing music. 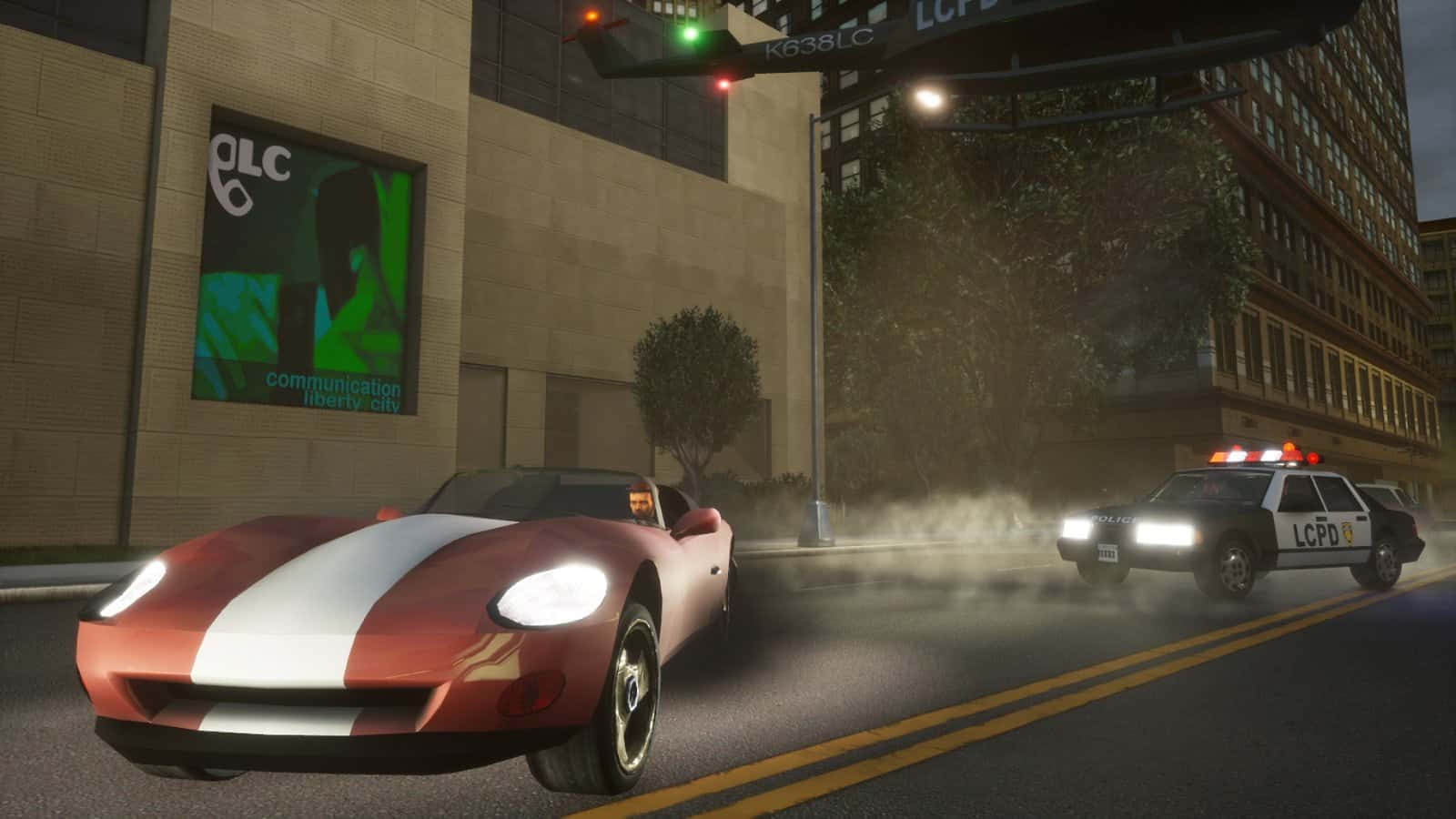 Think of Grand Theft Auto, and I’ll bet that what you see in your mind’s eye is at least an equal match for what rings in your ears. So much of the power of these games—and indeed of Rockstar’s empire—has been built on the giddy pleasures of cars and songs. No other developer has wielded licensed music so effectively in its world-building. For many, myself included, these games were albums. Better yet, they were albums plus context. Not only were you able to tune into hundreds of songs, but the very act of listening was grafted onto the landscape of play. I can’t hear “Express Yourself,” by N.W.A, without flitting, however briefly, back to Ganton, in south Los Santos; or “Billie Jean,” by Michael Jackson, and not see Ocean Drive at night, wreathed in thrumming neon. Both tracks, and over two dozen more, have been cut from Vice City and San Andreas, due to expired licenses. There are those that would argue, quite reasonably, that the loss doesn’t entirely damn the experience. But these are not affairs of reason. For those to whom the soundtracks are inseparable from the countless days spent in these cities, losing songs is akin to losing shards of memory.

In fairness, this is not the fault of the developer but that of Rockstar, the publisher of Grand Theft Auto: The Trilogy—The Definitive Edition. The costs, doubtless, were calculated and the losses deemed acceptable. The truth of that is for every player to decide. If these games shaped or changed you, you might find the notion of their being shaped and changed, in turn, an unwelcome one. I find it tough to have anything but sympathy for Grove Street Games. When it comes to Grand Theft Auto III, Grand Theft Auto: Vice City, and Grand Theft Auto: San Andreas, time, it turns out, hasn’t threatened their status as definitive works. It has secured it.

If these games shaped or changed you, you might find the notion of their being shaped and changed, in turn, an unwelcome one.
6 Three masterpieces Quality-of-life enhancements Missing music Missteps and glitches