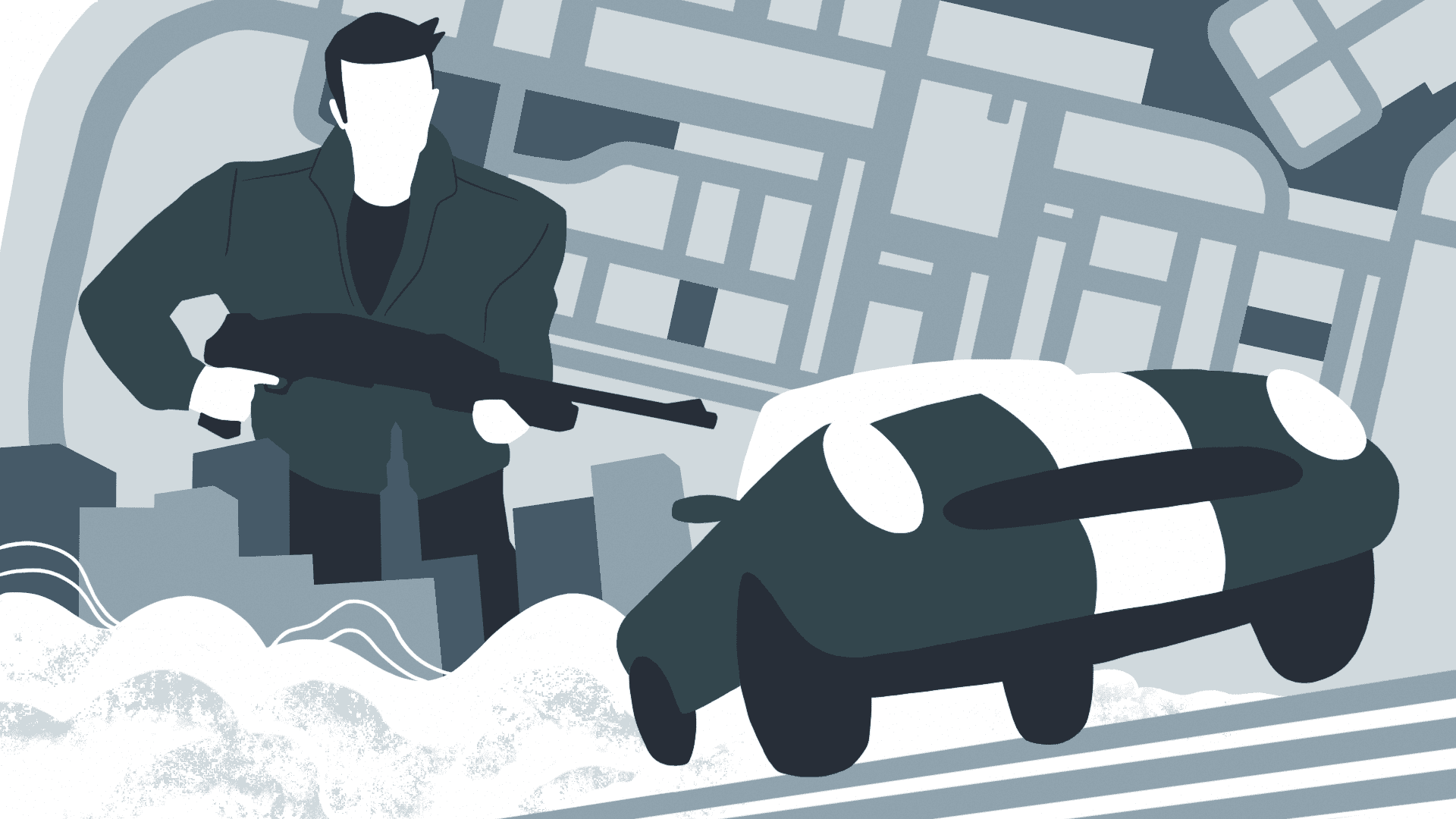 Give Me Liberty: Twenty Years of Grand Theft Auto III

Twenty years ago, a man failed to rob a bank. He was betrayed by his girlfriend, who shot him, took the money, and left him leaking in an alley. He didn’t die, but he was arrested. His story didn’t end there. The police convoy bearing him off to a life behind bars was attacked, and, amidst the confusion, he made a break for it—a figure of jumpsuited orange, slipping away into the rain. He needed to get off the street, and he needed a change of clothes, but he was free. And so were we.

The man was unnamed, though we would later come to know him as Claude. The game, of course, was Grand Theft Auto III, which we would later come not so much to know as to inhabit, breathing in the murk of its streets over the course of many months. In fact, there is a good chance, if you played the game when it first released—and thus had no clue what you were in for—that your memory of it is mingled with an intimate selection of bodily pains. I can no sooner recall Portland, the first of three islands that make up its setting of Liberty City, without feeling a phantom ache in my wrists: the side effect of a hundred mornings that stretched, breakfastless, into long afternoons and nights, where, beached in its urban gloom, my eyes would rust.

Firing up Grand Theft Auto III again recently, I could have sworn that they misted, out of pure Pavlovian hard-wiring, into a fine shade of pink. Maybe it was all the emotion. Two decades is a long while, and, as the years have barreled past—time being the grandest theft of all—the series has grown into a monolith, establishing the open-world genre as the dominant mode of blockbuster gaming and insuring that the pockets of its developer, Rockstar Games, run deeper than God’s. Not a bad legacy for Claude, who achieved this mission with a humble assortment of tools: a pager, through which crackled a stream of criminal opportunities; a mini-map, in which the city’s roads were trapped and yellowed; and a closed mouth, vital in this line of work—communicating the drive of a doer in a world of sayers.

And drive he did. Chief among the game’s revelations was the power to open the door of any vehicle, be it parked or rumbling softly at a red light, and, having deposited its owner tenderly onto the pavement, to shriek ahead through a rasp of rubbery fumes. It is perhaps hard to grasp now how outrageous it was that a mechanic so simple—bound to a single button—would key us into such an array of possibilities. It wasn’t that Grand Theft Auto III created the open world; it was just that it made so many others, in that instant, seem so closed.

Two years before, Yu Suzuki released Shenmue. Its setting was Yokosuka, a Japanese port city, in 1986, and Suzuki took great pains to convince us of its reality: slowing time to an agonising daily tick, plucking real weather forecasts from 1986 and filtering them through the graphical firmament. It was as if he were shaking a snow globe, swirling up flakes of detail in an effort to distract us from the glass. (To describe his game, Suzuki coined the term “Full Reactive Eyes Entertainment,” which sounds like both a twitchy medical condition and a rather laboured attempt to arrive at the acronym “FREE.”) Grand Theft Auto III, on the other hand, may have smeared the facades of its buildings with scumbled textures, as if the game were unwinding through a warm videotape, but it was done in the hope that you would fly by them in a blur of ecstatic mobility.

Strange to tell, Rockstar would arrive at the Shenmue approach much later; as I played Red Dead Redemption II (a game that demands nothing less than our full reactive eyes) and its hero, standing in a general store, held up tins of coffee for close inspection, I thought of Suzuki’s knack for finely ground detail. Mind you, not that such flourishes weren’t already percolating in the minds of those at Rockstar back in 2001. The notion that our impressions of a wider world—playing like colours over the surface of a bubble—might float us away more than the burstable spell of sheer scale was there in Grand Theft Auto III. Hence the radio stations, which soil the air with dirty satire and gust you along with blasts of pop. Or the billboards, which beckon us to watch imagined movies, like “Badfellas,” and, most teasing of all, to ponder flying to the sun-broiled pastures of “Miami” (doubtless drawn up before Rockstar had decided on Vice City, and tightened its grip on the fiction).

The decades have done little to dull the appeal of Grand Theft Auto III. (Often, it’s our memories that acquire the cobwebs, and it’s the games that brush them clean, or blow them away completely.) The last open world I was in, before jumping back into Liberty City, was that of Far Cry 6, and the feeling of relief—of liberating myself from the totalitarian regime of Ubisoft—was intense. I had gone from a game whose greatest fear was that I should be left, for the length of a blink, without the prodding of HUD, hints, and humourless allies to one that summed up the crux of its entire genre in fourteen words—“You can go and see Luigi for more work or check out Liberty City”—and whose idea of guidance came in the form of casual naughtiness: “To earn some extra cash, why not ‘borrow’ a taxi.” Why not, indeed?

The difference, even now, between an open world designed by Rockstar and an open world designed by pretty much any other studio can be summed up by that obligation-free, see-what-you-can-see “why not.” It is as though the company’s first rule of business were to forge places that hummed of their own happily sealed accord, and only then begin to think about how a player might be introduced into the equation—the machine has to be pristine, before the ghost is invited in. To play Grand Theft Auto III now is to be reminded of the bracing thrill of the cold shoulder, of the world that is not only fine without you but has neither the time nor the inclination to celebrate your presence. Most open worlds now seem to bend and bulge to accommodate you; there is no sense that, when you stop playing, they may carry on without you. With Liberty City, there is no sense that they may stop. I could scarcely walk ten feet in Far Cry 6 without a queue of phone calls from my allies; the revolution will be telephoned, but only if you’re there to pick up.

On the question of Why Not, in Grand Theft Auto III, one answer is that there is little use in extra money. Playing it again these last few weeks, I noticed how, for a tale in which our hero spelunks ever deeper into the criminal underworld, the better to finance a personal quest for revenge, we never detect the rustle or the reek of cash. Again and again, the words “Mission Passed” appear on the screen, and the numbers—presumably those of Claude’s bank account—course upward to reward our efforts, but for what? “Experience has taught me that a man like you can be very loyal for the right price, but groups of men get greedy.” So says Donald Love, a media mogul with a collection of unnatural hobbies and a sideline in running the world. But, while Claude may be for sale, it isn’t money that keeps us stuck to the story.

What is it? In a word, America. Or, at least, a cartoon sketch, inked with irony, of its underside. This is Rockstar’s great and only subject. This is why a man like Claude—a cipher, a “snake without a tongue,” as someone describes him—is perfectly suited to the task; all he does is look and listen. (No wonder the storyline of Grand Theft Auto V, with its trio of self-involved heroes, felt trapped and muddied; when it comes to our narrative loyalty, groups of men get greedy.) We work our way up to Donald Love by doing jobs first for the mafia and the yakuza, double-crossing without a care as we go, then for Ray Machowski, a police officer who doles out his assignments, in a darkly funny touch, from a public toilet in Belleville Park. From what better place for the stink of corruption to waft?

It is but a short hop from there to the offices of Love, who is voiced by Kyle McLachlan, and here I must make a confession. I was too young, on first play, to smile at the raft of in-jokes that Rockstar had provided. I got no kick from the character of Tony Cipriani, the wide-waisted mobster with a mother complex—a comic twist on Tony Soprano. I didn’t yet appreciate the cleverness of casting, as Ray Machowski, Robert Loggia—who had occupied a comfy cubicle as a mafioso in a string of movies and, yes, in The Sopranos. And it would be years until I would get the genius of hiring Kyle McLachlan. Who else but Agent Cooper, the bright and Brylcreemed F.B.I. agent from Twin Peaks, could give voice to Donald Love? The last we saw of him, in that show, he was imprisoned in the lounge from Hell, with a floor of black-and-white zigzags and curtains the colour of blood. Now, here he was, lodged in the corridors of power, supplying a concentrated dose of Lynchian perversion. In Liberty City, goodness goes off like milk.

So, somehow, it is 2021. It is October. As I write this, the nights are drawing in, the leaves are dropping, and the air has begun to bite. The most exciting prospect on the gaming calendar, from now until the end of the year, is Grand Theft Auto: The Trilogy—The Definitive Edition. Is this a sad state of affairs? True, it offers us the chance to revisit not only Grand Theft Auto III but Grand Theft Auto: Vice City and Grand Theft Auto: San Andreas, as well. Plus, in the trailers, we have glimpsed the art style that has been lacquered onto these games: Claude has a soft shine, as though he had been reshaped from clay, and the hues, of Vice City in particular, have been cranked up to a neon glow. But surely there are new games that ought to have me buzzing?

It isn’t as though I’m not gearing myself up for Forza Horizon 5, with its garage of thrumming thrills, or gazing at the green vales of Halo: Infinite in honest excitement. It’s just that both feel, illogically, like known quantities. Whereas something about Grand Theft Auto III still feels impossible to pin down. Its portrait of American texture, achieved in slashing strokes—in advertisements, in characters and casting, and in a litany of jabbing jokes—is as swift and sure as anything Rockstar, or any other developer, has done since. (Though, I am in helpless thrall to Red Dead Redemption, which paints, in oils and in earnest, a differing vision of the same landscape.) But it remains elusive, as though it had something yet to impart. Perhaps the reason for this is simple: it aims to hit a moving target. Twenty years later, Grand Theft Auto III is as fun and freeing as it always was, but the world it tells us about no longer exists. Perhaps we turn to the remaster looking for answers, hoping to see ourselves again.