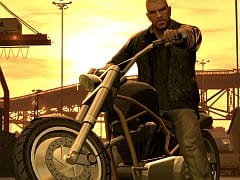 We’ve had a mixed bag as far as DLC goes, with developers struggling to find the right balance between content and price. The early DLC more or less focussed on small additions, like new characters or costumes, but more recently new levels and multiplayer maps have been growing in popularity. For around 800 Microsoft Points we’ve generally received two to three hours of new content, but Rockstar has completely rewritten the rule book.

The Lost and Damned, a new story-driven campaign for GTA 4, will take most people longer to work through than the campaigns of Call of Duty 4 and Call of Duty: World at War combined – all from some new content that costs less than £15. On top of this new episode Rockstar has added to the multiplayer component, included a bunch of new tracks for the in-game radio stations, and even freshened up the TV stations. DLC as we know it has changed forever.

Rather than returning to the life of GTA 4’s Niko Bellic, The Lost and Damned casts you as biker Johnny Klebitz, vice president of Liberty City’s motorcycle gang The Lost. At the start of the game you cruise through the streets of Liberty City with your gang before meeting up with president and all round nut job Billy Grey. He’s spent a considerable amount if time in rehab, during which Johnny has run things. On his return things understandably get a little heated as Billy takes over command and asks Johnny to do some things he’s not all that willing to do.

That’s more or less all the detail we want to go into regarding the story, because how it unfolds is key to the enjoyment you’ll get from the episode. What we will say is that Rockstar has quite brilliantly integrated the new storyline into that of GTA 4, with numerous crossovers with significant moments in last year’s game, returning characters and more. While The Lost only played a relatively small part in GTA 4, with Johnny making more appearances than the other members, those of you who finished the game will know that he’s a fairly significant character. What goes on here fits pretty seamlessly into the overall story (although why the city is free to roam from the off isn’t explained) and gives you a lot more background info on Johnny as a character.

In terms of how The Lost and Damned plays, aside from your improved motorcycle which corners far better than those in GTA 4, it’s more or less business as usual. There are a handful of new weapons, including the quite brilliant grenade launcher, automatic pistol and automatic shotgun, and Johnny seems a little tougher to kill than Niko, but the big difference comes from your gang. Many missions see you fighting alongside other members of The Lost (you can call a few of them up for assistance), who can increase their battle readiness by fighting alongside you. It’s a basic form of levelling up, but gives you more of a sense of being part of a gang and not just teaming up with throwaway NPCs.

Something that’s likely to be a bit hit and miss is the implementation of formation riding. When travelling from location to location with your gang you’re able to ride over a gang emblem to replenish health, as a reward for keeping your bike in the right place within the gang. Staying on the emblem for long enough isn’t all that hard, but trying to ride alongside NPC riders is very tricky indeed. The main problem is that when you’re following someone to a destination you don’t know which direction they’re going to turn until the last minute, causing your bike to either come to a screeching halt or an ill-advised sharp turn into whoever is riding next to you.

Rider AI gets a thorough workout here and often falls some way short of the quality the game demonstrates in almost every other area. Other riders tend to react to things too late, pay no attention to other vehicles that might be blocking their path and frequently mount the curb – something that stood out as something of an oversight during the otherwise impressive opening cutscene.

Whereas GTA 4 had to introduce you to the gameplay mechanics, the city and the characters, Rockstar has more or less assumed that players of The Lost and Damned will have already sunk hours into the game. This has allowed them to bypass the usual quiet beginnings of a full game, instead jumping straight in with the all-action missions. There are still a few generic fetch/delivery missions, but for the most part you’ll be blasting members of rival gangs or taking on cops. There’s even a series of turf war shoot outs, similar to those seen in the Saints Row games, adding some very enjoyable padding to the story and giving you a chance to level up your gang members. If you’re into these kinds of things there are also a few new mini-games, although we’d recommend you avoid the table hockey.

One concern we had about the GTA 4 DLC leading up to release is how Rockstar would make the content feel fresh, considering most buyers of the content would have already spent a long, long time driving around the city streets. The answer seems to have been to set lots of the missions in fairly underused parts of Liberty City. No doubt there’ll be complaints levelled at the fact that you don’t get a new island or suburb to explore, but this isn’t a sequel, it’s a very reasonably priced extension to the original game.

Something we didn’t expect was to be blown away by the visuals, but having not played GTA 4 for a while, going back to it made us realise just how much of a technical marvel it is. The frame rate and pop in issues are still present, but the city is created so brilliantly that these problems soon fade into the distance. Unlike other open-city games, in GTA 4 you get a real sense of the city being alive – whether it’s just a guy selling hotdogs on the street or NPCs getting into random fights. Rockstar has included a new grain filter, which is on by default. To our eyes this added to the atmosphere really well, but it can be turned off if it’s not to your taste.

Storytelling in The Lost and Damned is also of an exceedingly high standard, with Rockstar once again showing the rest of the industry how it should be done. While we prefer Niko over Johnny as a leading character, the quality of acting here is top notch, perhaps even better than it was in the original, and the tension within the gang is portrayed exceedingly well.

The additions to the soundtrack are superb, the new content on the TV is brilliant and there’s even a new comedian performing at the comedy club, although probably not as well known as Ricky Gervais. On top of this there are numerous new multiplayer modes, including what we can only describe as online multiplayer Road Rash, complete with baseball bats. We have to admit that we fell out of love with GTA 4’s multiplayer much quicker than we expected we would, but we predict many nights wasted playing The Lost and Damned’s new modes.

The Lost and Damned would be worth buying as a stand alone game, so as a sub £15 priced download it’s an essential purchase. Had we felt as attached to the main characters as we were to those in GTA 4 we might have been looking at another 10, but Rockstar has still changed what we expect from downloadable content.

The Lost and Damned would be worth buying as a stand alone game, so as a sub £15 priced download it's an essential purchase.
9 Loads of content Superb story New multiplayer modes are good Johnny is no Niko