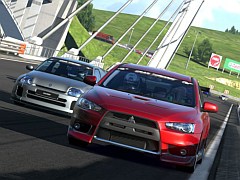 I must have poured hundreds of hours into Gran Turismo 3. Released during the summer before I started university, Polyphony Digital’s first entry in the series for PS2 proved to be a good enough reason to prevent me from getting a summer job – after all, I had to devote all my time to the lucrative, but oh so dull endurance races so my car collection could grow to obscene proportions. It’s fair to say that GT3 was a phenomenon. Back in 2001 the game was dropping jaws all over the world and sales to date stand at around 15 million units. To put that into context, that’s more than the combined worldwide sales of Halo and Halo 2 on the Xbox. Gran Turismo is about as big as racing games come.

So, Gran Turismo 5 Prologue should represent something of a milestone for the PlayStation 3. As the first retail Gran Turismo for Sony’s latest console you’d expect sales of the console to soar and Sony fans the world over to be rejoicing. And they are, just not quite as jubilantly as you might expect. GT5 Prologue is in fact just a teaser for what we’re going to get from the full GT5 when it’s released next year. What we get in this budget £25 release is six tracks (Eiger Nordwand, Daytona International Speedway, the London City Track, Fuji Speedway, Suzuka and the High Speed Ring) drivable in two layouts, 71 cars, car tuning, 16-player online support, two-player split-screen and more. Not bad by any means, but don’t be fooled into thinking this is any more than a prelude to the big event.

Anyone who’s played a game in the GT series will instantly recognise the sleek menus and presentation. From the off the game’s so trendy it’s just missing a bouncer asking for ID at the door and checking for trainers. It’s GT through and through, with options and game modes galore. You’ve got News, GT TV, Online, Rankings, Arcade, 2P, Events, Garage, Dealerships and Replay. Again, for £25 that’s a fair amount of content and it rubbishes any claims that GT5 Prologue is little more than a demo.

The core modes are Events, Arcade and Online. While Prologue doesn’t include an all encompassing career mode, Events is where you’ll find the most traditional GT experience. After buying your first car it’s time to enter the Class C races your car is eligible for, earning credits for your performances. Build up enough credits and you can buy another car, giving you access to more events, and repeat the cycle until your garage is full of cars from Class A, B and C and you’re whipping the competition every time you take to the track.

Newcomers will find Prologue’s cars pretty tricky to get to grips with at first. Even compared to Microsoft’s Forza series, at first it feels as if you’re cornering at walking pace. A number of driving options (Transmission, Active steering, Driving Physics, Active Stability Management, Traction Control and Driving Control) are available so you can tailor the handling to your skill level, but even with all the assists on things take a little getting used to. For some the sim nature of the car physics will be too much to handle, but persevere and the physics really comes into their own.

What doesn’t impress nearly as much is the way your AI rivals behave during races. The GT series has always been criticised for its racing experience and GT5 Prologue doesn’t improve things a great deal. The car handling is never questioned, but compared to its competitors (Forza 2 and PGR4) races in GT5 Prologue feel far too much like processions. At times while playing Forza 2 you could have mistaken an AI driver for a real-life opponent, but no such mistake could be made while playing Prologue. Things aren’t helped by the way your car bounces off competitors, without any damage in sight – compounded further if you’re not using a Dual Shock 3.

You’ll really only get a true sense of the depth to the car physics once you unlock the Quick Tune options and the 10 S-Class races (achieved by completing all 30 A-C Class events). By this time you’re likely to have been playing for longer than it takes to complete current PS3 big hitters Uncharted or Ratchet and Clank, perhaps even both. You’ll still only have a small number of the 71 cars too, so there’s no question you’ll get your money’s worth from Prologue. Tweaking your car settings and going after the S-Class races will take longer still, if you’ve got the skill needed to win. The included Arcade mode also offers a more instant way to sample the tracks on offer in the game, and a number of manufacturer specific events can be accessed from within the Dealership menu.

The game looks completely stunning for the most part. Car models are incredible, the detail in the tracks is at times breathtaking and the 1080p visuals are to die for, but there are a few unsightly blemishes. The aforementioned lack of damage is more jarring than it ever has been, with the lack of damage totally ruining any sense of realism. The frame rate, something the series is known for, also fluctuates far too often. During certain corners when the cars stack up the game really starts to chug and this is usually accompanied by some ugly screen tearing. Those fake backgrounds, most noticeable on the Eiger Nordwand track, also don’t quite fit. To my eyes they stick out like a sore thumb.

What is without doubt the biggest disappointment of all is the online implementation. It’s currently woefully behind what we’ve got in Forza 2 and PGR4, lacking even basic support for custom races. Support for up to 16 players is excellent, but without a friends list or any proper match making you’re left to pick from the 35 events currently listed. You can’t organise races with friends or browse races taking place, and unless you own the required car and have completed the required single-player events your choice online is extremely limited. After starting the game with the cheapest Honda available at the dealership my online events were restricted to two races on the two most basic tracks in the game. There are online leaderboards for anyone interested in time trials, but anyone expecting Forza 2 levels of online brilliance will find nothing of the sort.

In the end GT5 Prologue is pretty essential for GT fans but its enhanced demo nature is more than obvious in various parts of the package. For £25 (even cheaper if you shop around) you’ll get more play time than many full-price titles, but with a severely limited online mode and some visual blemishes it’s hard not to be a little disappointed. Hopefully Prologue really is just a tiny part of what we’ll get with Gran Turismo 5 next year.

In the end GT5 Prologue is pretty essential for GT fans but its enhanced demo nature is more than obvious in various parts of the package.
8 Stunning car models Physics are superb Online is disappointing Slowdown