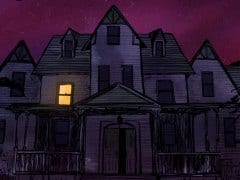 When you leave home for the first time it feels strange, but coming home after that is even weirder. Being away for so long that the place you call home has changed beyond the point of recognition is an unpleasantly alienating sensation, and the immediate desire is to collect information: Examine stuff, look around, see what’s changed. In Gone Home, that’s pretty much all you do.

Gone Home is the tale of a girl who’s just spent a year travelling around Europe. Returning to an unfamiliar home that her family have recently moved into, you arrive to find that no-one is home. A note from your sister is pinned to the front door, but reading it doesn’t make things any clearer. You called ahead to say when you’d be back, which only makes matters stranger. Lights flicker, the house creaks, and the thunderstorm outside really isn’t helping.

Trying to find out why your family aren’t at home is the immediate reason for exploration, but your motivations quickly evolve – as you peek in drawers and read through letters, you gradually learn more about your family, piecing together the things through fantastically realistic details. The house you explore is large and creepy, but the objects scattered throughout always make it feel like a home. For a game that relies on writing rather than characters, Gone Home always seems to nail the tone: One letter to your mother from her friend talks about “Nintendo Street Fighter Cassettes”, which is exactly the sort of thing that mums tend to say.

It’s impossible to say more without spoiling a game that only lasts two hours, but Gone Home is special for two reasons: It nails the alienating sensation of feeling lost in a place that should be your home, and perfectly emulates the mild fear that comes with exploring a big dark house – especially when it appears that something might be wrong. If you think that great narrative is its own reward, you’ll love Gone Home. Otherwise, you’ll probably be safer just avoiding it.

Gone Home nails the alienating sensation of feeling lost in a place that should be your home, and perfectly emulates the mild fear that comes with exploring a big dark house.
9 Unexpected narrative Excellent use of voyeurism Amazing attention to detail Very expensive for 2 hours