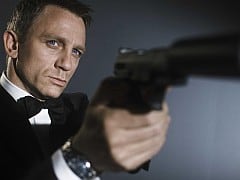 GoldenEye on the Wii was at times great, occasionally a bit ropey, but mostly quite alright. The same is true of Reloaded on the Xbox 360 and PlayStation 3, a graphically enhanced port of the original with revamped multiplayer. The problem is that the FPS market on these consoles is significantly stronger than it is on the Wii, and as such GoldenEye 007 Reloaded resides a considerable way down the pecking order.

GoldenEye 007 isn’t a scene for scene remake of the illustrious Rare game, instead basing itself on the movie while simultaneously bringing everything into the modern era. Pierce Brosnan is gone, replaced by Daniel Craig, and with him comes the brutal Bond we saw in Casino Royale and Quantum of Solace. There’s also far less emphasis on gadgets this time around, with Bond much more adept with guns and his fists. Bond basically has to stop the bad guys, using a whole armoury of firepower, stealth and a smartphone.

GoldenEye feels a lot like Modern Warfare – largely due to the snap-to aiming and the supply of high-tech guns – but it’s not a carbon copy. The pace is somewhat slower than the arcade-like quality of the CoD games, and there are less in-game set-piece moments, with the most explosive sequences saved for non-interactive cutscenes.

Upping the difficulty provides you with additional objectives that require more than simply gunning down wave after wave of bad guys, but I still felt like I was playing a shooting gallery. You could argue that all first-person shooters are like that, but there’s never enough spectacle here to cover up what is fairly generic gunplay. Stealth takedowns are occasionally encouraged thanks to enemies who conveniently stand with their back to you, and firing a silenced pistol is always great, but the level designs are too linear for this side of the game to ever shine.

In last year’s Wii game it was possible to fail missions by not completing all the objectives. You’d finish the level, only for the post-mission screen to inform you that you’d failed and could only continue if you lowered the difficulty. Thankfully this system has been removed from Reloaded, with none of the avoidable objectives being mandatory to progress.

New to this port is the MI6 Ops mode, in which you visit the locations from the campaign and attempt to get high scores and earn stars. Essentially you have to kill all the enemies as quickly as possible, although certain levels require you to stay hidden or defend computer consoles. Each challenge comes complete with online leaderboards so there’s a competitive element, but there’s little here that will make you want to invest much time.

Multiplayer has always been one of GoldenEye’s defining features, so it’s good to see developer Eurocom has included plenty of options if you want to shoot friends, or enemies, in the face. The biggest throwback to the original game comes in the shape of four-player split-screen, complete with plenty of customisable options. It works surprisingly well, with a generally acceptable frame rate.

If you don’t often get the chance to get three friends sat on the sofa with you, GoldenEye 007 Reloaded also offers online multiplayer, upping the player count from the Wii’s eight players to a more hectic 16. There’s a heavy CoD influence throughout, including on-screen XP popping up when you kill (or eliminate as the game calls it) enemies, a ranking system complete with unlockable perks – sorry, gadgets – and attachments such as the reflex sight. There are plenty of modes, covering team and solo play, customisable load-outs and multiplayer challenges.

GoldenEye 007 on the Wii looked decent, but it wasn’t a stunner. Reloaded’s HD makeover is certainly an improvement, but the game is still some way beneath the genre’s most impressive titles. Environments suffer from a lack of objects and therefore a lot of large, empty spaces. The poor frame rate seen in the Wii game has been ironed out, but there’s no getting away from the fact that this started out life on a significantly less powerful console. Voice work and the soundtrack can’t be faulted though, with suitably Bond-like music accompanying the action alongside Daniel Craig’s gruff tones.

Strangely, what I didn’t get too much of from this re-imagining is nostalgia. While many levels are similar to those featured in the N64 game, the changes made and the new character models make the end product feel quite dissimilar. Part of this is down to the lack of gadgets, with Daniel Craig’s Bond only having a smart phone as a kind of Swiss Army Knife of the gadget world. That’s what Bond is these days, but it’s just not very GoldenEye circa 1997.

GoldenEye 007 Reloaded is a decent, if fairly by the numbers, port of the Wii game. The single-player campaign is simple fun and the online play is surprisingly entertaining, especially if you find the likes of CoD and Battlefield a bit too hardcore. It’s a shame more wasn’t done to spruce up the presentation and expand the level design, leaving us with what feels like an HD re-release rather than a game designed for this generation of consoles.

It's a shame more wasn't done to spruce up the presentation and expand the level design, leaving us with what feels like an HD re-release rather than a game designed for this generation of consoles.
6 Campaign is simple fun Mutliplayer has been enhanced Feels like an FPS from yesteryear Needed a bigger upgrade for Xbox 360 and PS3

An updated port of GoldenEye Wii for HD consoles.

An updated port of GoldenEye Wii for HD consoles.